This regular CAPA report provides a summary of the major developments in the aircraft interiors sector for each region, supported by data from the CAPA Aircraft Interiors Database.

+ regional updates from Asia and the South pacific, EMEA, and the Americas.

JetBlue Airways has pursued a determined effort to acquire Spirit Airlines since Frontier Airlines and Spirit first announced a merger agreement in Feb-2022. JetBlue’s persistence has now paid off, as Spirit has now agreed to a definitive merger agreement with an enterprise value of USD7.6 billion.

The merger, still subject to approval, presents certain questions regarding cabin harmonisation and which suppliers will benefit from a proposed JetBlue-Spirit consolidation.

Before the merger announcement Spirit completed the installation of Thales' 'FlytLIVE' high speed connectivity solution onboard its A320 and A321 fleet.

However, it is possible that JetBlue will retrofit Spirit aircraft to complement the ‘JetBlue experience’ currently in the airline’s A320ceo/321neoLR fleet – including a transition to the AVANT (Thales) IFC product under a fleet harmonisation programme.

The merger could also lead to a fleet-wide seat retrofit, with the deployment of Collins Aerospace Interior seating and in-seat power sources on Spirit’s current fleet of 180 A320 aircraft and 123 A320s on order.

In Sep-2019 Spirit Airlines announced plans to deploy Acro Series 6LC slimline seats in its economy class, plus HAECO recliners in its 'Big Front Seat'. The merger could lead to a review of Spirit’s ‘guest experience’, with JetBlue potentially replacing the Acro and HAECO seats with the Collins Aerospace Interior’s Meridian product.

The merger could be a boon for the Iowa-based OEM – which already has a leading position in the US economy seat market, according to data from the CAPA Aircraft Interiors database.

Economy class seat manufacturer market share in the US: Jul-2022 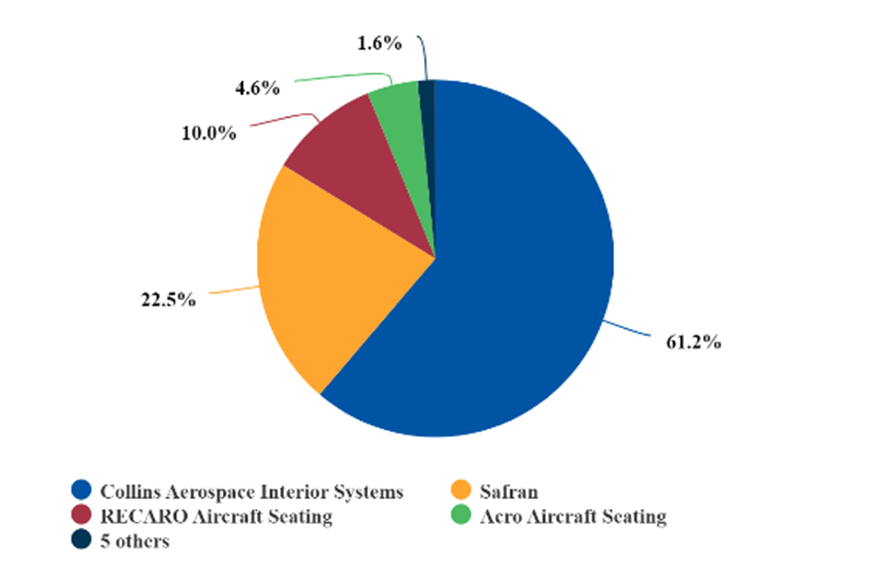 Economy class seat manufacturer market share in the US for aircraft on order: Jul-2022 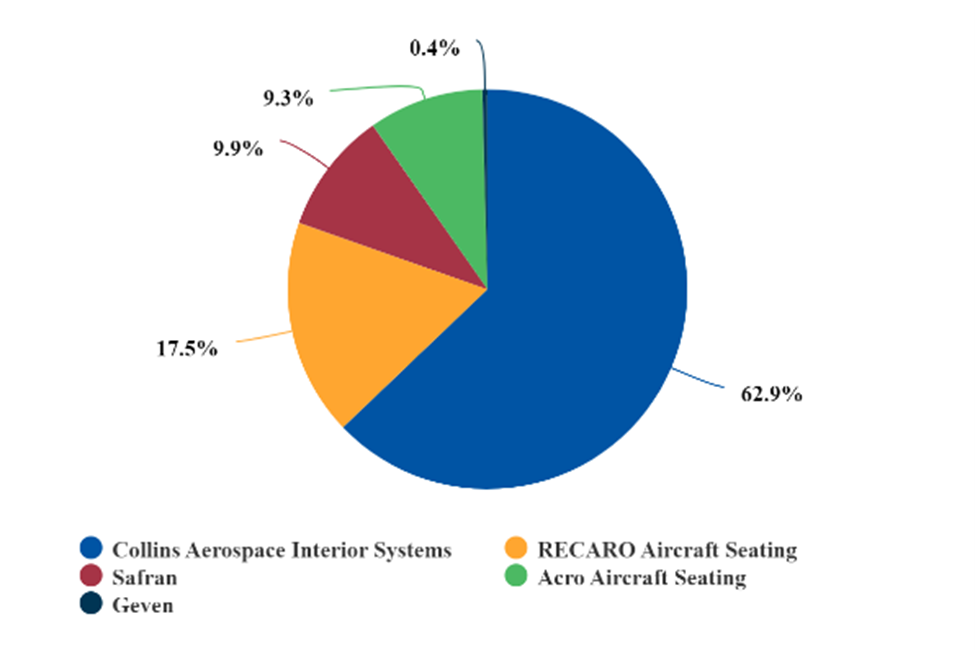 Virgin Atlantic has revealed interiors for its new Airbus A330neo fleet, designed to provide a premium, personalised experience. The Airbus A330-900neo will feature the latest generation of its Upper Class cabin, including its iconic social space as well as a new innovation: The Retreat Suite.

Upper Class suites will be supplied by Thompson Aero Seating, while Collins Aerospace Interior System will supply 46 MiQ seats in premium economy and RECARO will provide 184 CL3710 seats in economy. The airline selected Viasat as the provider of inflight connectivity (IFC) for its new aircraft.

The Retreat Suite consists of two exclusive suites at the front of the cabin. The airline’s most spacious product yet, it comprises a 6ft 7in direct seat to fully flat bed and a 27in touchscreen with Bluetooth connectivity and wireless charging. With each suite boasting an ottoman that doubles up as an extra seat, up to four people can comfortably dine, chat or play games in their own private social space.

In addition to The Retreat Suite, the A330neo will offer 30 brand new Upper Class suites, complete with fully closing privacy door with a ‘do not disturb’ feature.  It has passenger-controlled mood lighting and a 17.3in touchscreen TV.

The airline’s The Loft social space remains a focal point of the cabin design as customers board the aircraft and is a core part of the Upper Class experience. In an evolution of design from the Airbus A350, it consists of space for eight people, with four seats.

In the aircraft’s 46-seat Premium cabin Virgin Atlantic’s trademark burgundy seats with a 38in pitch remain, but they’re accompanied by calf rests in every seat and a 13.3in touchscreen with Bluetooth audio.  The airline is also offering its Premium customers an in-seat wireless charging pad.

In the new Economy cabin travellers will be met with the airline’s largest ever economy screen, at 13.3in, with an intuitive touchscreen and Bluetooth audio to connect headphones, plus AC power and USB ports. There will be 28 'Economy Delight' seats, which offer an increased 34in seat pitch, or 156 'Economy Classic' seats, providing a 31in pitch.

The new interiors will be factory installed on up to 16 A330-900neos before delivery. Virgin Atlantic will take delivery of three aircraft in 2022 – the first due to arrive in Sep-2022 and debuting in the London-Boston market from early Oct-2022.

The airline describes the innovations as being driven by “overwhelming customer feedback” on the importance of sleep and the need for more comfort and space.

Air New Zealand says feedback from extensive customer research over five years has highlighted the importance of a good night's sleep and the need for more space and comfort, so the new experience is designed around “creating a home away from home” that leaves customers “refreshed and raring to go at their destination”.

According to the airline, eight new Boeing 787-9 Dreamliners arriving from 2024 and the retrofitted current 787-9 fleet will have either eight or four Business Premier Luxe seats, 42 or 22 Business Premier, 52 or 33 Premium Economy, 125 or 213 Economy seats, and specifically on the ultra-long haul aircraft, six Skynest sleep pods. They will offer the “most choice of any airline in its three cabins to get the best sleep in the sky”, it says.

"New Zealand's location puts us in a unique position to lead on the ultra-longhaul travel experience. We have zeroed in on sleep, comfort, and wellness because we know how important it is for our customers to arrive well-rested. Whether they are heading straight into a meeting, or to their first holiday hotspot – they want to hit the ground running”, said Air New Zealand CEO Greg Foran.

The new business class cabins normally are the focus for airlines, but it is the economy advancements that grab the headlines with this announcement.

For Economy customers the Skynest concept, first announced by the airline in 2020, will be a world-first, and others will be watching closely at its introduction.