Airberlin: still in need of a cap that fits, although 1Q2014 operating loss narrows slightly

Airberlin's 1Q2014 results do not add much to the public understanding of its business. Probably the most important recent development has been confirmation of the balance sheet recapitalisation announced in Apr-2014. Without this, which relies largely on funds from 29% shareholder Etihad, airberlin would have been in dire straits.

But the fortunate reality is that Airberlin now has breathing space to focus on cutting its CASK and raising its RASK, following years of both rising (but CASK rising faster). In 1Q2014, both fell and airberlin modestly narrowed its operating loss by cutting CASK slightly more than the drop in RASK. Its Turbine cost programme is making itself felt, but the shift in Easter hurt revenues.

In another important development, airberlin has begun the fundamental restructuring announced in Apr-2014. It has a still fairly new CEO and an influential airline shareholder; this process has now introduced a newly appointed Chief Restructuring Officer and external consultants. Previous restructurings and strategic changes have failed to assure a sustainable business model, but perhaps one of them will manage it this time.

In 1Q2014, airberlin saw its net result fall by EUR13 million to a loss of EUR210 million, with the difference mainly due to non-cash tax credits. Its EBIT improved slightly to a loss of EUR183 million, from a loss of EUR188 million a year earlier, although the EBITDAR loss was EUR6 million below last year's level.

Balance sheet is restructured after the end of 1Q2014

A recapitalisation of the balance sheet subsequent to the end of 1Q2014 has raised a total of EUR552 million, consisting of EUR252 million in new bonds and EUR300 million in a subordinated perpetual convertible bond subscribed by 29% shareholder Etihad Airways.

In addition, Etihad has extended the time frame for its USD255 million shareholder loan from the end of 2016 to the end of 2021.

CFO Ulf Huettmeyer told analysts on a conference call to discuss the 1Q results that this loan was "made for a rainy day", adding "I do not see any need to draw on that".

See related report: Airberlin: Etihad to the rescue after another loss in 2013. Meanwhile codeshare partners are booming 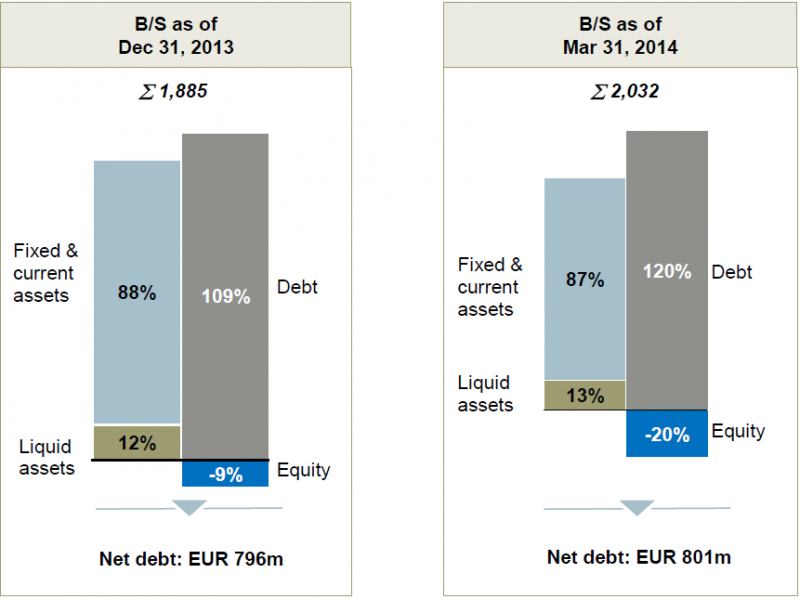 Airberlin increased its capacity in 1Q2014, returning to positive growth after two years of cuts. ASKs increased by 4.4% year on year, but this was not matched by passenger demand and RPKs fell by 0.2%, so that load factor fell by 3.8 ppts to 81.8%.

CEO Wolfgang Prock-Schauer told analysts on the 1Q conference call that demand weakness was most noticeable in Spain, where there was over capacity, and Russia and Egypt, which had been affected by geopolitical events.

Although load factor declined, other indicators of operating efficiency improved. Airberlin operated 3.5% more flights and 1.2% ore block hours, while operating 4% fewer aircraft in the quarter compared with a year earlier. The number of destinations was cut by 4.2%, highlighting airberlin's focus on increasing the frequencies on more profitable routes as the main growth driver.

In 1Q2014, Etihad and airberlin jointly carried 139,000 passengers on common codeshare flights, an increase of 12% year on year, with new destinations in India, Korea and Australia.

This rate of growth was slower than the more than 70% growth enjoyed in 2013, but this is to be expected given that the relationship only began in 2012. Airberlin expects that the growth rate will increase in the coming months as new destinations are added, particularly in India and South Korea. In addition, a second daily frequency to Abu Dhabi, connecting into Etihad's network, will be added from this autumn.

Meanwhile, as previously reported by CAPA, in a further sign of closer cooperation between members of the Etihad Equity Alliance, airberlin is to transfer its Duesseldorf-London Stansted service to Etihad Regional (formerly Darwin Airline) from 2-Jin-2014. Airberlin operates the route with a 17 times weekly frequency and using Q400 equipment, whereas Etihad Regional will deploy Saab 2000s initially and, from 26-Oct-2014, ATR72s.

Oneworld membership also allows airberlin to benefit from other sources of codeshare traffic. Common codeshare passengers with oneworld partners grew by 14% year on year in 1Q2014, reaching 117,000. This was driven in particular by airberlin's relationship with American Airlines, but also by cooperation with S7 and Finnair.

On the North Atlantic, Mr Prock-Schauer said that airberlin has "a good competitive position at Berlin and Duesseldorf". Referring to comments from some competitors that capacity growth on transatlantic routes was accelerating, he said hat he was "not worried". He added: "we see good trends ahead. Maybe there is overcapacity on big, big hubs".

RASK fell 7.9%, but the outlook is more stable

In spite of a modest increase in average sector length (+0.6% to 1,494 km), airberlin saw a 3.8% fall in the average flight revenue per passenger. This may have been affected by the change in the timing of Easter, but also indicates a lack of pricing power. This impression is reinforced by a 7.9% drop in total revenue per ASK (RASK), although Mr Prock-Schauer said on the analysts' call that current forward bookings indicated that RASK should stabilise from 2Q and Mr Huettmeyer said that Apr-2014 was ahead of last year.

Airberlin's total revenues fell by 3.8% year on year, in spite of the increase in ASKs. Flight revenues and in-flight sales fell by around 5%, reflecting the factors noted above, while revenues from ground and other services increased by 6.5%.

Total operating costs fell by 4.1%, slightly more than the fall in revenues and in contrast with the growth in ASKs. Fuel costs fell by 5.4% and non-fuel costs fell by 3.7%. Labour costs were up 2.4%, in spite of a 4% reduction in headcount, due to wage increases in 2013.

Substantial reductions in costs were achieved in the area of materials and services (down 7%), particularly in airport and handling charges, reflecting efficiency measures taken under the Turbine restructuring programme (and in spite of higher charges at Spanish airports).

The 3.4% increase in Other operating expenses reflected higher spend on advertising, maintenance and IT. The higher level of IT cost reflected investment in the optimisation of the reservation and revenue management system. 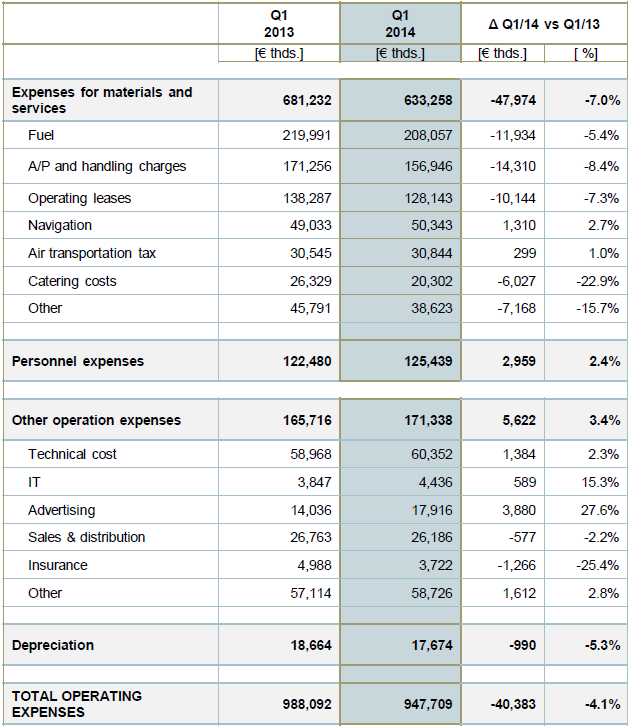 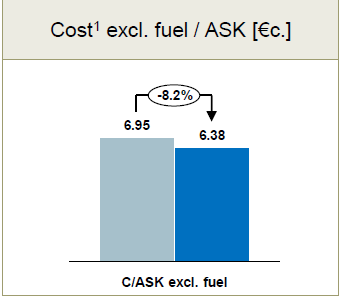 Turbine is cutting costs, but the revenue outlook is not reliable

The CASK reduction achieved in 1Q2014, after an increase in FY2013, gives some evidence that airberlin's Turbine cost restructuring programme is starting to have a real impact. When announcing its FY2013 results in late Apr-2014, airberlin said that it was targeting a fall in ex fuel CASK and an increase in RASK for FY2014.

After 1Q2014 results, the cost part of this equation is well on track. The revenue part was blurred by the change in the timing of Easter, but Mr Prock-Schauer and Mr Huettmeyer indicated on the 1Q analysts' conference call that the underlying RASK outlook is currently "flat-ish". Flat RASK is better than falling RASK and will lead to improving profitability if CASK falls, but it is short of the RASK increase previously anticipated.

This highlights the difficulty in relying on RASK growth, which cannot always be controlled by management. This reinforces the need for further cost efficiencies, something that airberlin recognises.

Reiterating to analysts that Turbine was "not enough", Mr Prock-Schauer said that the "deeper restructuring process" announced in Apr-2014 was under way, but cautioned that "we won't communicate prematurely the results of our conceptual work".

With the recapitalisation, Etihad has bought airberlin time to carry out this review.

Airberlin is still in need of a cap that fits

This process is not just about cost cutting, however, and involves a re-evaluation of airberlin's long term business model. As part of the process, airberlin has created the new position of Chief Restructuring Officer, appointing Marco Ciomperlik to this role, with a seat on the Management Board. Mr Ciomperlik has been Chief Maintenance Officer for the past five years. In addition, the carrier is employing two external consulting firms to advise on the new restructuring.

Whether this will help to clarify its future will be a vital call, after so many previous attempts at change. Airberlin has tended to adopt a scattergun approach to renewal in the past; now a more carefully tailored strategy is needed.

In the past two or three years, airberlin has become part of the Etihad Equity Alliance, joined oneworld, changed its CEO and embarked on its Turbine restructuring programme. This followed years of sampling almost every strategic option available – charter carrier, LCC, full service carrier, short-haul, long-haul, M&A predator and prey.

In a CAPA Analysis report in Mar-2013, we suggested that, after trying on every cap, airberlin needed to find one that fits. Fourteen months later, it needs to show that the process is at last gaining traction.