Airberlin: Etihad to the rescue after another loss in 2013. Meanwhile codeshare partners are booming

Another year, another loss for airberlin – a worse one, in fact. Its 2013 operating loss was double that of 2012 and marked four successive losses (excluding the gain from the sale of its FFP to Etihad in 2012). Capacity cuts helped unit revenues to increase, but unit costs grew faster, in spite of progress with the Turbine restructuring programme. It was always going to take time to turn the ailing airline around and airberlin expects further savings in 2014 and is more optimistic about this year, planning a return to capacity growth and targeting both an increase in RASK and a cut in CASK. Nevertheless, a return to a positive operating result will be a challenge.

Two years into its equity partnership with 29% shareholder Etihad, airberlin is still reliant on the latter's deep pockets and patience. Having such a backer creates breathing space, but is not a substitute for a viable strategy. Another rescue recapitalisation, now planned in 2014, should ensure airberlin's medium term survival, but it is in need of fundamental reform if it is to survive and thrive into the long term. Acknowledging this, airberlin CEO Wolfgang Prock-Schauer has announced a review of its business model.

The prior year result benefited from the sale to Etihad of 70% of airberlin's topbonus frequent flyer programme. Excluding this transaction, the 2012 operating result would have been a loss of EUR114 million, so the 2013 result represents a doubling of the underlying loss.

2013 was the fourth successive year of operating losses (excluding the impact of the topbonus sale in 2012). Accumulated losses have wiped out airberlin's book equity, which stood at minus EUR186 million at the end of 2013, while net debt reached EUR796 million.

This net debt figure compares with airberlin's Nov-2013 target of EUR650 million, itself revised up from a previous target of EUR500 million.

The weakness of airberlin's balance sheet, with negative equity and low cash balances, has led to 29% shareholder Etihad agreeing to provide a further EUR300 million cash injection in the form of a cumulative perpetual subordinated convertible bond. In addition, a further EUR150 million will be raised through the issue of a new corporate bond (and EUR100 million of existing bonds due in 2014 and 2015 will be refinanced with a longer maturity). The negotiation of this recapitalisation process led to the delay in airberlin's reporting of its 2013 results.

On a proforma basis, the impact of the recapitalisation on the end 2013 balance sheet would be to reduce net debt to EUR496 million, to increase equity to EUR114 million and to increase cash to EUR673 million (59 days of revenues). This gives airberlin much more breathing space to pursue its restructuring, which must remain the group's top priority.

Over the past three years, airberlin has burnt around EUR200 million annually in operating cash flow, before capital expenditure, and has only survived with the support of Etihad in 2012 and 2013. According to the CAPA Fleet Database, airberlin has 52 aircraft on order (37 narrowbody and 15 widebody), for delivery between 2014 and 2018. Without a fundamental restructuring to reverse its negative cash flow, its long term future will be very doubtful.

Etihad increases its investment without increasing its ownership stake

Although described as a loan, the EUR300 million convertible bond subscribed by Etihad is treated for accounting purposes as equity as it has no maturity date and is convertible into shares. Moreover, airberlin is not required to pay interest on the bond.

Etihad has thus provided airberlin with a cash injection without burdening it with additional interest payments or the obligation to repay the loan. These are features normally associated with equity, but the approach taken means that Etihad is not increasing its stake in the voting equity. This is designed to ensure that Etihad does not risk contravening limits on foreign ownership by raising its ownership beyond the 29% level that it already held.

The European Union is already investigating Etihad's investment in airberlin to consider whether or not it might contravene regulations on non-EU control. This new cash injection may heighten the rigour with which this investigation is conducted, although airberlin told analysts on a conference call to discuss the 2013 results that it did not expect this to be the case.

In 2013, airberlin cut its seat capacity by 6.9% and passenger numbers fell by 5.4%. ASKs were down 5.1% (less than the fall in seat numbers due to longer average sector length), with RPKs down 3.6% and passenger load factor up 1.3 ppts to 84.8%. This load factor compares favourably with the 2013 average for members of the Association of European Airlines of around 80%.

However, the load factor improvement was not uniform across the year as gains in 1H2013 turned into load factor declines in 2H2013. This reflected challenging market conditions in Europe as a result of better than usual weather in northern Europe and competitive capacity growth in certain markets.

In 2014, airberlin expects to add a further 200,000 codeshare passengers, bringing the total to more than 5% of its passenger numbers. 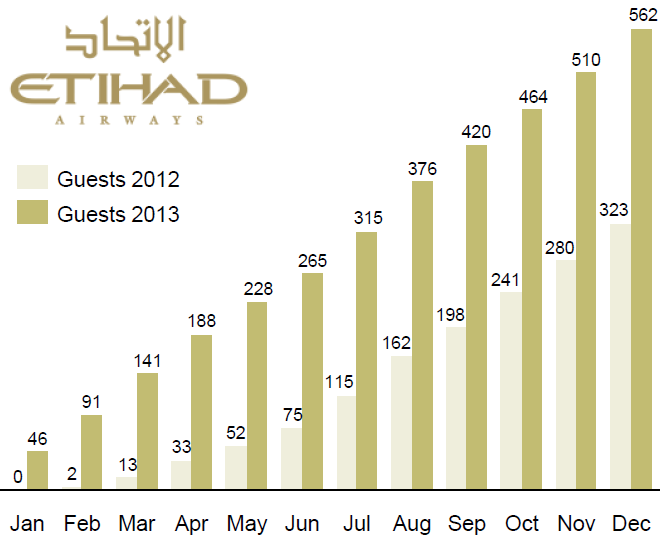 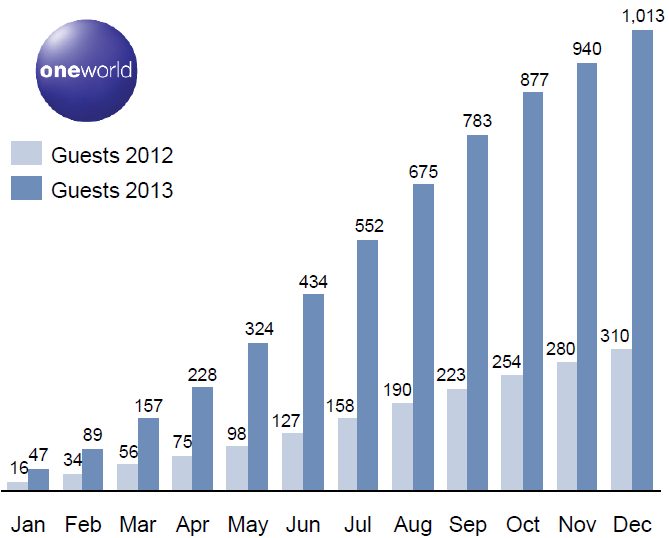 airberlin's revenues fell by 3.8% in 2013, less than the cut in capacity, with revenue per ASK up 1.3% in line with the gain in load factor. The fall in flight revenues of 4.8% more closely reflected the ASK cut, while revenues from ground services increased by 12%. Duty free and in-flight sales fell by 20%.

Costs were down 1.5%, but did not match capacity reductions

Operating costs fell by 1.5%, failing to match the cut in capacity and the drop in revenues. Costs per ASK grew by 3.7%, with ex fuel costs per ASK growing faster at 5.2%. 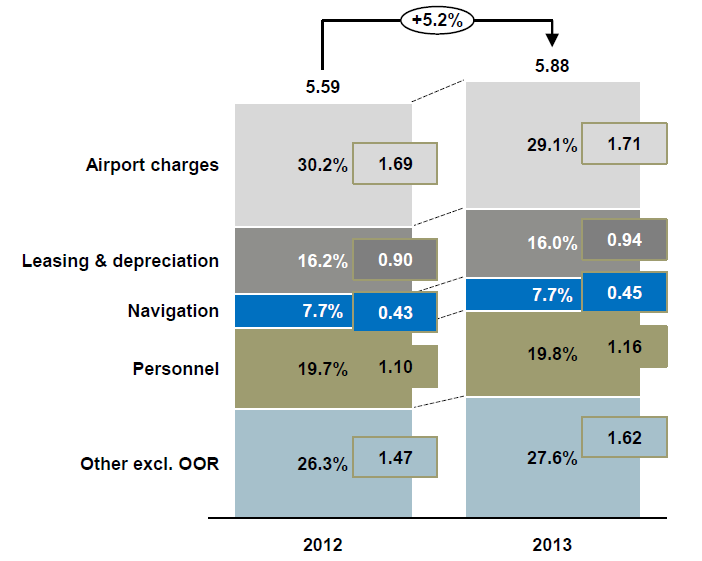 2014: airberlin will return to capacity growth

airberlin has not provided any profit guidance for 2014, but has set targets for capacity growth. It plans seat growth of more than 3%, with the strongest growth expected in domestic Germany and on the intercontinental network (more than 5% for both), while domestic Spanish routes will see seat numbers cut by more than 20%.

ASK growth is expected to be higher than seat growth, at more than 4%, and airberlin expects load factor to improve by at least 2.5 ppts.

There is to be a greater focus on airberlin's Duesseldorf and Berlin Tegel business, where it is the number one carrier, and much of the capacity increase will come from higher frequencies. Non-strategic routes with high seasonality are being withdrawn.

2014: RASK is expected to grow and CASK to fall

Airberlin expects RASK to increase and ex fuel CASK to fall in 2014.

Its strategy for RASK improvement includes further gains in load factor, the development of the business segment, an enhanced point of sale strategy and further development of its codeshare with Etihad and oneworld.

Airberlin has achieved RASK growth in recent years, although this has been helped by ASK reductions since 2011. This year will be a key test of whether it can continue RASK growth when capacity is also growing once more. Mr Prock-Schauer told analysts that current indicators demonstrated a positive RASK trend currently. 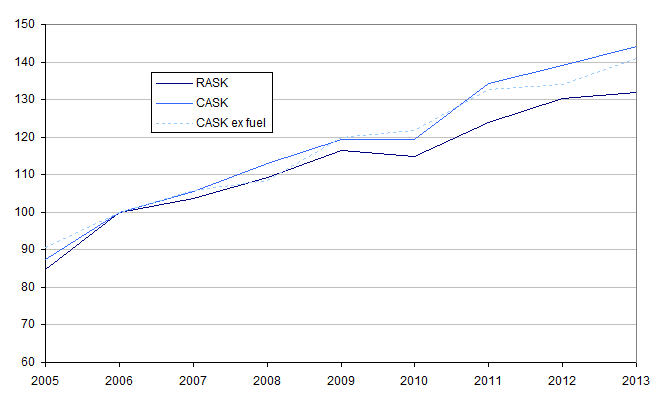 Although airberlin does not have a good track record on unit cost in recent years, its aim to cut CASK in 2014 has some early positive back-up: total CASK fell by 8% in 1Q2014, according to the company's presentation.

The lower unit cost outlook should be helped by ASK growth and also by reductions in fixed costs. For example, airberlin says that aircraft ownership costs will fall as a result of fewer planned aircraft, lease rate renegotiation and USD currency movements. In addition, it expects increased crew productivity, the benefit of Turbine initiatives and the cessation of restructuring charges. 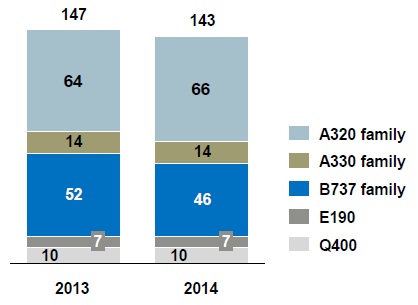 Etihad is there for the long term…

Etihad and airberlin say that their codeshare partnership has so far led to additional joint revenues of EUR200 million. In addition, Etihad talks of cost synergies "through joint procurement initiatives in aircraft, engines, maintenance, catering and technology."

Referring to its equity investment in airberlin, Etihad CEO James Hogan said "for less than the cost of a single wide-body aircraft, Etihad Airways gained access to more than 30 million passengers and a combined European network of 228 destinations across 84 countries".

However, Etihad's total investment has been greater. After the new convertible bond, Etihad will have put a total cash sum into airberlin of more than EUR800 million (including equity, loans, convertibles and the acquisition of topbonus). This could be even more, if it also participates in the new corporate bond. For the short term this looks to be a large sum for a minority stake in a loss-making airline with a track record of consuming cash at the rate of EUR200 million every year. Incremental revenues are valuable and look set to grow, but Etihad will be looking for a greatly improved bottom line at airberlin.

Airberlin will need a dramatic turnaround in its own profitability to justify Etihad's investment; contributing incremental feed into Etihad's network is itself not enough. Etihad has committed to airberlin for the long term, but nobody likes to keep throwing good money after bad.

… but airberlin still needs a deeper and more radical restructuring

And airberlin knows this. In addition to the Turbine programme, airberlin recognises the need for deeper and more radical restructuring in 2014 and 2015. CEO Wolfgang Prock-Schauer said in a company statement: “Even though the Turbine efficiency program has delivered according to plan and will take full effect in 2014, we have to increase the pressure during implementation, drive further measures as well as thoroughly evaluate our possible courses of action including airberlin's long-term business model".

airberlin has even created a new post, that of a chief restructuring officer. This may help to increase the focus internally on the need for change, but, after four years of losses, it also seems to have the effect of highlighting the lack of serious progress in achieving such change so far. At this stage, no further details of the new restructuring are available as options are still being considered.

While the recapitalisation should ensure that airberlin remains a going concern for the time being, the airline urgently needs to establish clearly improving trends in profitability in 2014 in order to set a course for a sustainable long term future.

Strategically the Etihad investment/partnership continues to look a viable measure, as Etihad expands its behind-gateway move into Europe. But the bean counters will become restless unless clear financial rewards are apparent at the German carrier.