With its latest business plan, airBaltic has joined a number of other European carriers seeking to turn around its operations. As with Air France, Austrian Airlines and Air Malta, airBaltic is attempting to return to profitability in the face of rising competition and fuel prices. The carrier’s restructuring plan is aimed at strengthening its operations with a modernised and simplified fleet, while reducing expenses and its workforce.

airBaltic’s plan, titled “ReShape”, was unveiled earlier this month but had been expected following developments in late 2011 - when the Latvian Government stepped in to acquire Baltic Aviation Services’ (BAS) 47.2% stake in the carrier. This brought the Government’s total ownership of airBaltic to 99.8%.

At the time, the airline was threatening mass redundancies and network cuts as it sought fresh capitalisation. High level executive changes were also made in late 2011 with Martin Gauss replacing Bertolt Flick as CEO. With the new turnaround plan now in place, the airline is planning to increase its attractiveness to strategic investors.

AirBaltic aims to return to profitability in 2014

ReShape is aimed at returning airBaltic to profitability by 2014 while also allowing for sustainable development from its Riga, Latvia base. airBaltic has been unprofitable the last several years, reportedly incurring a loss of LVL34 million (USD 64 million) in 2010 and an estimated LVL80 million (USD131 million) loss in 2011. Under ReShape, significantly reduced losses are expected in 2012 and 2013 prior to returning to profitability in 2014.

The new business plan includes fleet modernisation and simplification to focus only on two aircraft types - Bombardier Q400 turboprops for regional operations and either A319 or Boeing 737NG narrowbody jets for its main routes. ReShape will also introduce other improvements in "cost optimisation, operational efficiency, revenue enhancement and network" totalling savings of LVL330 million (EUR472.3 million) over the next five years.

Following the plan’s announcement, details on redundancies were also released. airBaltic announced that approximately 15% of full-time employees, amounting to about 150 of the airline’s full time workforce of 1,200, will be made redundant by the measures. Employee unions are yet to publicly comment on the redundancy plans, but the airline may face some opposition and possible industrial action once the cuts begin.

airBaltic operates based on a hybrid airline model with features from traditional full-service and low-cost carriers. While the airline operates to primary city airports rather than secondary airports and offers a business class product, it does have a number of ancillary charges. airBaltic’s network of 60 destinations are all routed via its Riga base, in line with standard network legacy carrier practice.

The carrier operates a fleet of 34 aircraft consisting of 14 older-generation 737s, two Boeing 757-200s, eight Bombardier Q400s and 10 Fokker 50s. It has an additional four Q400s on order. Of these aircraft, eventually all except for the Q400s will be phased out over the next few years as it modernises its fleet.

airBaltic only operates scheduled services within Europe, so its new simplified fleet will be more effective and efficient for its current operations. However the airline does operate some charter services further afield, so a lack of medium-range aircraft such as the 757-200 may force it to drop these non-scheduled services. 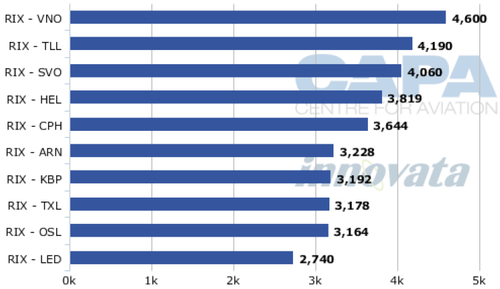 airBaltic focuses on bolstering established network rather than expansion

With uncertainty present within the European markets, along with its own financial issues, the airline is being cautious with network expansion and focusing on growing existing routes rather than entering new markets. Since Dec-2011, airBaltic has announced intentions to increase frequencies to several existing destinations. For example, Vienna, Munich, Zurich, Amsterdam, Moscow Domodedovo and Billund will all see frequency increases to at least daily operation.

airBaltic also plans to launch a new route, Riga-Dublin, in Jun-2012. Having at least a daily service is important to provide favourable frequencies for consumers and will also enable the airline to build its operations and achieve efficiencies rather than the riskier move of venturing into new markets. Also, with the upcoming opening of Berlin Brandenburg Airport - and airberlin, Austrian Airlines and Lufthansa also seeking to increase their links to the East - airBaltic needs to ramp up its operations between Western and Eastern Europe to remain a key player.

The intensifying low-cost carrier competition throughout Europe, including in the Baltic States, is placing immense pressure on small national carriers such as airBaltic. These flag carriers are struggling to retain their once dominant positions within their home markets as their high cost operations are threatened by the low cost structures of budget carriers. airBaltic is better positioned than most considering its hybrid low cost/full service model but it is relying upon its turnaround plan to return it to a stable position, which is needed for the Latvian Government to succeed in attracting new strategic investors.