AirAsia reported another successful third quarter to 30-Sep-2009, with each of its short haul airlines reporting profits, on the back of strong passenger number and revenue growth. The Thai JV airline’s performance did not match the highly positive results elsewhere, particularly those of the main Malaysian operation, which delivered an EBITDAR margin of 31.7% and an after tax profit margin of 17.6%.

In a climate where most other airlines in the region are reporting their worst figures in history, this result does suggest that AirAsia’s model is in the right space at this time.

(Note: a complete report on AirAsia’s results will be provided in this week’s Peanuts Weekly)

CEO Tony Fernandes stated that: “AirAsia’s relentless focus on costs continues to deliver savings. While fuel remains  volatile, we have continued to drive up productivity gains through investments in technology,  contain airport and handling costs while the current low interest rate environment helps us to  reduce the cost of aircraft financing.”

Ancillaries an integral part of the strategy

The importance of ancillary income to AirAsia’s business strategy is growing rapidly, helping compensate for the current weakness in yields. Said CEO Fernandes,  “Average fare was down in the third quarter but despite the significant drop, the contribution  from ancillary income more than offset the impact of lower average fares.

“Ancillary income grew by 86% to RM130 million representing 20.4% of total revenues. This is the strategy going forward whereby our passengers will continue to enjoy low fares whilst we make it up from growing the ancillary sources. This strategy will shield the Company from being overly exposed to airline specific risks and make the business more robust.”

As the following graph shows, the focus on this source of revenue is generating increasing levels of return (although the upward trend is somewhat distorted by reduced yields, inflating the impact of the non-ticket revenue). 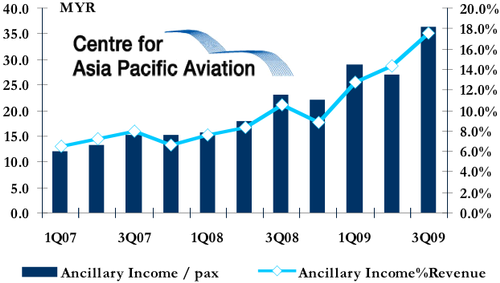 AirAsia's average spend per passenger on ancillaries is now MR36.20, generating in total RM130 million for the third quarter: 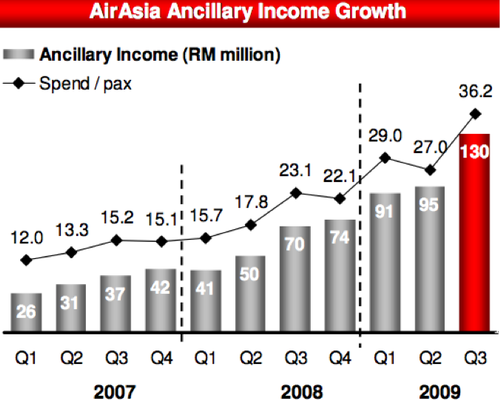 Perhaps the good news is that, measured against ancillary returns in other parts of the world, AirAsia’s proportion of revenue from this source is nonetheless still relatively low.

The rapid improvement of income from ancillaries is well illustrated in the following graph (which appears in the Centre’s “Global LCC Outlook; The world has changed”).

In the same report, Ryanair COO, Michael Cawley recently noted he believed that ancillaries “maxed out” at around 22%, at least for his airline. Even so, that suggests there is still considerable upside for AirAsia, still only at just under 14%. 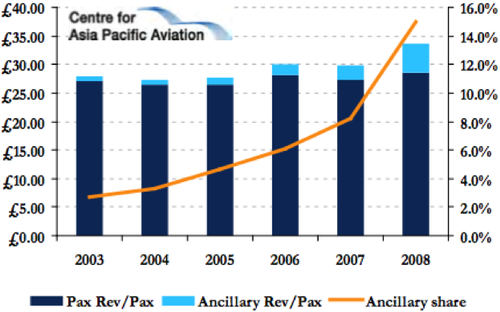 Meanwhile, AirAsia X, now operating at a respectable 77% load factor, demonstrated that “The long haul, low cost model is proven successful”. It is early days to be making such a claim, but those same early days tend to be the most difficult for a new entrant. AirAsia X is reportedly profitable at this stage, although the quarterly financial results were not specific.

The long haul carrier is also to introduce a limited number of flatbed seats shortly, to cater for demand at the lower end of the premium market – a feature which must be viewed with some concern by full service competitors. 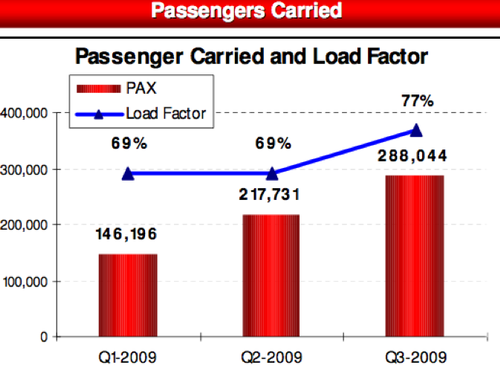 According to management, the outlook for AirAsia X remains strong – the “fourth quarter (is) looking positive with strong loads and high yields”. 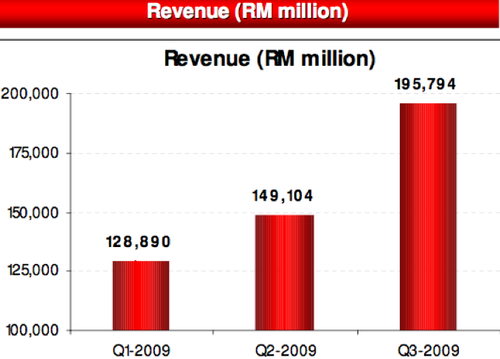 AirAsia and its partner airline AirAsia X is now becoming a sizeable global competitor, as can be seen from the following route map. Together the two operate 129 routes – of which  over half are city pairs which were previously not connected by direct air services. 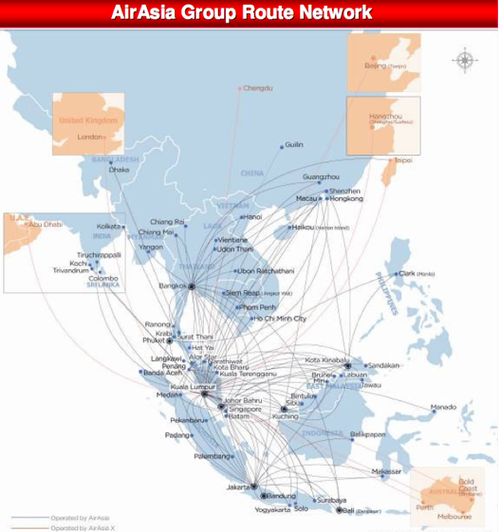