Air New Zealand (ANZ) and Virgin Australia will be allowed to continue their trans-Tasman alliance under a draft decision issued by the Australian Competition and Consumer Commission (ACCC) on 10-Jul-2013. But the ACCC has made some significant changes to the routes that will be regulated with capacity and growth conditions.

The Commission has rejected the alliance partners’ request for all minimum capacity conditions to be lifted. Instead the ACCC has increased the total number of routes that will be subject to capacity conditions. In addition the Commission will require both airlines to provide regular key performance data to allow the regulator to better track the public benefits and detriments the alliance delivers over the next three years.

The carriers are also likely to challenge the ACCC’s draft decision to grant re-authorisation of the metal neutral alliance for just three years, rather than the five years requested, placing it at odds with the five year term granted to the rival Qantas and Emirates alliance in Mar-2013.

ACCC commissioner Jill Walker states in her draft decision that renewing the alliance is likely to result in material public benefits when taking into account the enhanced products and services, particularly in the business travel market, which is likely to elicit a competitive response from the Qantas Group.

The ACCC also states in its decision that the alliance has resulted in material public benefits in the two years of operation, in the form of enhanced products and services (particularly through new frequencies) and the promotion of competition on the trans-Tasman routes. In addition the alliance has resulted in small public benefits in the form of cost savings and efficiencies and the stimulation of tourism.

There may also be some public benefits that are yet to be fully realised, given the short period that the alliance has operated.

Despite the benefits, however, Dr Walker warns the “weighing up of likely public benefit and detriment was finely balanced and it was only with the proposed conditions that the ACCC reached the preliminary view that the alliance is likely to result in a net public benefit”.

For this reason and in light of the dynamic nature of the aviation industry, the ACCC has opted to authorise the alliance for only three years, allowing for more timely adjustments to capacity conditions in response to any changes in public benefits and detriment.

Without the alliance, Virgin Australia’s trans-Tasman operations would be more limited than its key competitors and Air New Zealand is likely to be at some competitive disadvantage to the Qantas-Jetstar/Emirates alliance due to its weaker sales presence and more limited access to the domestic market in Australia.

The ACCC’s view on both of the Wellington routes contrasts with its position under the current authorisation, which requires Air NZ and Virgin Australia to at least maintain existing capacity.

More alliance routes will be covered by capacity and growth conditions

But the commission has made some significant changes to the routes on which it will apply capacity conditions compared to those that are regulated under the 2010 decision.

In its 2010 decision the ACCC identified six overlapping routes on which it considered Air NZ and Virgin Australia would have the ability and incentive to unilaterally reduce or limit capacity growth in order to raise airfares.

Just two of those six routes, Wellington-Melbourne and Dunedin-Brisbane, remain on an expanded list of eight routes on which the alliance will be required to maintain a base level of capacity, subject to a yet to be determined growth factor.

However, two routes from Christchurch to Melbourne and Brisbane have been added after significant capacity cuts occurred on both in the aftermath of the 2011 earthquakes in the city, which resulted in the number of Australian tourist arrivals to the city declining by 40% between the Jun-2010 and Jun-2012 years.

Increased competition eases concern on some routes from Wellington, Auckland and Queenstown

Increased competition or potential competition over the past two years has eased the ACCC’s concerns that the alliance will lead to anticompetitive behaviour on Wellington-Sydney, Wellington-Melbourne, Auckland-Brisbane and Queenstown-Sydney city pairs. As a result it proposes to remove capacity conditions on those routes.

China Airlines entered the Auckland-Brisbane route in 2011 and Jetstar became the fourth competitor on the Queenstown-Sydney route in Dec-2011, joining parent Qantas, ANZ and Virgin Australia. However, the commission is seeking more information from the alliance and the market about the likely competitive impact on the Auckland-Brisbane route before making a final decision. 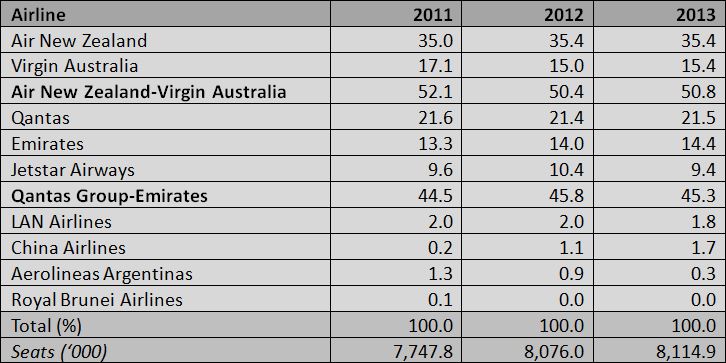 In addition, the current requirement for Air NZ and Virgin Australia to maintain a base level of capacity on the Tasman as a whole will be removed under the new authorisation. The ACCC now considers that the trans-Tasman-wide capacity condition “will do little to limit the competitive detriments likely to result from the alliance”.

The ACCC says that since the 2010 decision there have been a number of developments in the trans-Tasman market affecting competition on routes previously subject to capacity conditions. Among them Qantas-Emirates have been granted authorisation to extend their global alliance across the Tasman from 18-Apr-2013 and Virgin Australia has implemented its “game-change strategy” increasing its focus on attracting higher yielding passengers including business traffic.

China Airlines has also commenced services on the Sydney-Auckland and Brisbane-Auckland routes, while Jetstar launched services between Sydney and Queenstown as well as Auckland-Cairns and Melbourne-Queenstown.

With the exception of the Gold Coast service, none of the alliance’s Auckland routes is subject to capacity conditions.

This division of routes and schedules by the alliance is part of a strategy to maximise the individual market strength of each brand. Air NZ generally operates peak time services on the main business routes, while Virgin Australia focuses on leisure oriented routes and timings.

Capacity conditions will remain in place for the Wellington-Brisbane route due to the alliance’s monopoly position.

The ACCC has taken the view that absent the alliance, Virgin Australia would be unlikely to re-enter the Sydney or Melbourne routes as a strong competitor to both ANZ and Qantas given its stated position that if the alliance was not reauthorised the carrier would review its schedules and capacity on the Tasman.

As such the alliance is unlikely to significantly alter the ability or incentive to reduce capacity on the routes.

The Key Wellington Stakeholders Group, led by Wellington International Airport, supported re-authorisation of the alliance, but only for a further term of three years and only with continued appropriate capacity conditions.

The group says there has been little growth on the Wellington-Brisbane route beyond that required by the conditions during the operation of the alliance. Removing the capacity conditions on the route would provide a “very real incentive” for the alliance to reduce capacity and increase fares.

Christchurch-Brisbane has become an alliance monopoly after Jetstar withdrawal

But while market changes have eased the commission’s concerns on some routes, Jetstar’s withdrawal from the Christchurch-Brisbane route in Mar-2012 has left the alliance unopposed, placing the route firmly on the anti-competitive risk list with capacity conditions to be imposed.

Air NZ and Virgin Australia increased their share of the Christchurch-Brisbane route to nearly 99% in the year to Feb-2013 after Jetstar withdrew from the route in Mar-2012 and total capacity declined by 35% to 280,000 seats.

It appears unlikely that either Qantas or Jetstar will enter the Brisbane market, given statements by the Qantas Group that it does not intend to increase capacity on the trans-Tasman in the next five years. It is therefore likely that Air NZ and Virgin Australia will face limited competitive constraint on the route.

Market shares on the Christchurch to Melbourne route have remained stable, but capacity has reduced by 19% in the three years to Feb-2013.

In 2010 the ACCC also considered that Jetstar would be likely to operate more as an independent LCC providing a competitive constraint on the alliance between Christchurch-Melbourne and Auckland-Gold Coast.

But, while Jetstar is the number two player on the Christchurch-Melbourne route, its constraining influence has diminished as Virgin Australia continues to develop as a full service airline and away from its LCC roots.

Competition on the Christchurch-Sydney route from the Qantas-Emirates alliance, which as a near 71% combined market share is expected to keep the ANZ-Virgin Australia alliance in check.

Generally high load factors on all the Christchurch routes indicates there may be unmet demand, according to the ACCC.

Competitive detriments are also considered likely on the seasonal Dunedin-Sydney and Dunedin-Melbourne routes where Virgin Australia is the only operator having replaced Air NZ. But due to the extremely thin nature of the two routes the ACCC considers the detriments would be small. The regulator instead proposes to bundle the routes with the existing six times weekly Dunedin-Brisbane service under a single capacity and growth condition, allowing the alliance greater flexibility to manage capacity on the routes.

The proposal goes some way to meeting Dunedin’s request for conditions to be extended to the Sydney and Melbourne services. Dunedin Airport chief executive John McCall reportedly said: "At this point in time, we're supportive of the determination."

Queenstown-Brisbane route continues to be of concern to the ACCC

The seasonal link between the South Island resort town of Queenstown and Brisbane also continues to cause concern for the ACCC. The route is operated by Qantas, Air NZ and Virgin Australia. In 2011 the alliance held an 88% share of the 34,000 seats of which ANZ operated nearly 64%, Virgin Australia 24% and Qantas the remaining 12%.

In another example of Virgin Australia’s leisure market focus, in the year to Feb-2013 the capacity operated by the alliance partners has been swapped with Virgin Australia operating about 70% of the 40,000 seats offered, while Qantas’ share had declined to 7.7%. In total the alliance’s capacity share has grown to just over 92%.

Despite the alliance’s dominant position the ACCC is concerned that the route is too small to be commercially attractive to a new market entrant, including Jetstar, strengthening the ability and incentive for the alliance to unilaterally raise airfares.

As a result the ACCC proposes to remove capacity conditions imposed on the ANZ-Virgin Australia alliance for the route.

Of the eight routes on which the alliance faces capacity conditions, the ACCC proposes that Air NZ and Virgin Australia will be required to maintain at least an aggregate base level of capacity, subject to a growth factor, on Christchurch-Brisbane and Christchurch-Melbourne and Dunedin-Brisbane, Sydney and Melbourne.

The airlines will also have to maintain a base level of capacity, subject to a growth factor, on Wellington-Brisbane, Queenstown-Brisbane and Auckland-Gold Coast.

The ACCC has invited submissions from Air NZ, Virgin Australia and interested parties on the structure of the conditions and the proposed growth factor.

Both Air NZ and Virgin Australia have welcomed the decision to renew their alliance, but they have also indicated that they will challenge the limited three year renewal as well as the capacity conditions.

The airlines believed the alliance had proven the public benefits and that capacity conditions were not necessary to maintain competition in the trans-Tasman market. They will continue to work with the ACCC to “understand its rationale for requiring the conditions and the limited three year authorisation period”.

While the Air NZ-Virgin Australia alliance will face capacity conditions on a larger number of mainly tourism driven routes, the carriers should take some comfort from the fact that the ACCC has also responded appropriately by removing capacity conditions on a number of routes where competition has increased, reducing the potential anti-competitive detriment that the combined market strength of Air NZ and Virgin Australia brought.

Renewal of the alliance authorisation must be separately approved by the New Zealand Ministry of Transport. The ACCC has invited further submissions on the draft determination before making a final decision.