After a period of unit revenue growth following the global financial crisis, Air Europa came under heavy pricing pressure in 2015. Renewed growth by Iberia has intensified competition to Latin America, while LCCs are putting strain on short haul yields.

Air Europa does not report profits, but it is its parent company Globalia's largest business by revenue. The privately owned Globalia group has been profitable since 2013 but suffered a fall in profits in 2015, when its Air Division's revenue declined by 3% in spite of traffic growth. The group balance sheet has low liquidity and Globalia is reportedly considering an IPO.

Widebodies now represent more than half of Air Europa's seats and 20 out of 27 outstanding orders. This reflects the importance of its Latin American network and its ambitions to continue long haul growth, as detailed in part 1 of this report. Moreover, the widebody orders are for Boeing 787s – to replace A330s, generating cost efficiency gains. CAPA estimates that Air Europa's unit cost is above that of LCCs, but closer to them than to FSCs. It has a good track record of labour productivity growth, which will be useful in its quest for further CASK reduction.

Globalia's Air Division is its largest by revenue

In addition to its Air Division, which consists of Air Europa, the Globalia group includes five other principal business segments. The Wholesale Division is the Spanish market leader in its field of tour operations. The Incoming Division sells accommodation online and services such as trips, transport and vehicle rental.

The Retail Division has the largest network of branches of travel agents in Spain and Portugal. The Hotel Division manages premium hotels in Spain, Morocco, the Dominican Republic and Cuba. The Handling Division provides ground services to airlines in Spain and Morocco.

The Air Division is the group's largest by sales, accounting for 45% of group revenue in 2015.

Globalia's operating profit and net profit both fell in 2015

The Globalia group's total revenue grew by 2% to EUR3.4 billion in 2015; note that this is for the calendar year to the end of Dec-2015, whereas previous financial years ended in October. The group's operating profit fell by 53% to EUR52 million and its net profit fell by 87% to EUR4 million. These were its lowest profits since it made a net loss in FY2012.

*net profit figures for FY2010 and FY2011 not available from Globalia website
**Oct year end up to and including 2014; calendar year for 2015
Source: CAPA - Centre for Aviation, Globalia annual reports

The Globalia group had a gross cash balance of just EUR50 million at the end of 2015 – the equivalent of only five days of revenue. Its net debt of EUR243 million was 1.6 times the book value of its equity. Although this is not especially high, when capitalised operating leases are added to net debt at eight times annual lease payments the adjusted net debt figure of EUR1.8 billion was 12 times book equity.

Globalia has been reported to be considering an IPO, and these figures suggest that it could benefit from additional capital – particularly given that it has 27 aircraft on order (see below).

This drop in revenue was in spite of a 6.6% increase in passenger numbers to 10.2 million, for the first time taking Air Europa back above its pre-global financial crisis traffic volume of 9.9 million passengers carried in 2007.

Passenger numbers had fallen in each of the years 2008 to 2012, when they reached a low point of 8.1 million, before rising by 26% from 2012 to 2015. In 2015, significant developments included new routes to Asunción and Tel Aviv and the launch of inter-isle flights in the Balearic Islands.

Air Europa's scheduled ASKs increased by 9% and its load factor gained 0.2ppts to reach 84.0% in 2015, as described in more detail in part 1 of this analysis (see link above).

The company has not separately reported charter versus scheduled traffic since 2010, when scheduled flights accounted for 92% of total passengers and this ratio was on a rising trend. CAPA understands that the proportion of scheduled passengers has continued to grow since then. 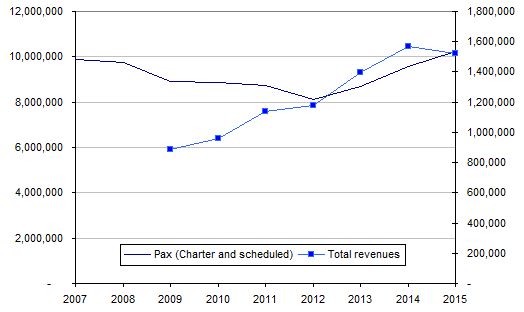 Taking revenue figures for Globalia's Air Division and dividing them by passenger numbers it is possible to calculate the development of total revenue per passenger for Air Europa (see chart below). In 2015 its average revenue per passenger fell by 9% to EUR149 – the first decline in this measure in the period following the 2009 global financial crisis.

This 2015 figure was still 40% higher than in FY2009, but the drop indicates the price pressures in Air Europa's markets (also linked to the fall in fuel prices). 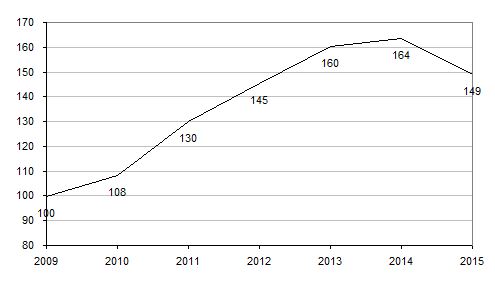 Average revenue per pax fell in 2015, in spite of increased trip length

This negative price trend is all the more keenly felt when account is taken of the continued increase in average trip length taken by Air Europa passengers. All other things being equal, passengers typically expect to pay more for a longer trip.

From FY2009 to FY2014 a 33% increase in average trip length was outpaced by a 64% rise in average revenue per passenger. This points to good pricing power for Air Europa during that period.

Growth in revenue per passenger had slowed to 2% in FY2014 after three years of double-digit increases, but the 2015 figure marked an abrupt reversal of the rising trend. 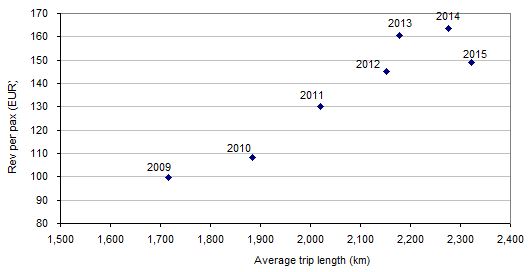 *Data for the Air Division of Globalia
**Average trip length calculated from scheduled RPKs and CAPA estimate of scheduled passenger numbers
***Note: Oct year end up to and including 2014; calendar year for 2015
Source: CAPA - Centre for Aviation, Globalia annual reports

Using the Globalia Air Division revenue data and the data on scheduled ASKs for Air Europa it is also possible to calculate the development of the airline's total revenue per ASK (RASK). This fell by 10% in 2015, further highlighting pricing pressure in its markets.

However, the much sharper decline in 2015 reflects a much weaker pricing environment.

This price weakening has been a market characteristic for most airlines, but for Air Europa it probably also reflects Iberia's return to growth – particularly on Latin American routes – and the significance of LCCs on European routes. 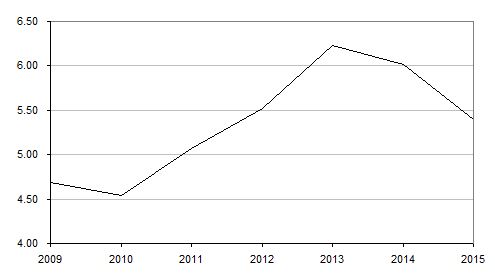 *Data for the Air Division of Globalia
**RASK calculated from Air Europa total revenue and scheduled ASK
***Note: Oct year end up to and including 2014; calendar year for 2015
Source: CAPA - Centre for Aviation, Globalia annual reports

In 2015 capacity and traffic growth was achieved with a 3% reduction in average headcount. Air Europa's traffic growth throughout FY2009 to 2015 was managed with a largely stable workforce, implying strong improvements in labour productivity. From FY2009 to 2015 passenger numbers increased by 15%, while ASKs grew by 55% (faster than passenger growth as a result of increased average trip length).

Over the same period average headcount reported for Globalia's Air Division increased by just 1% and ASKs per employee grew by 54%. 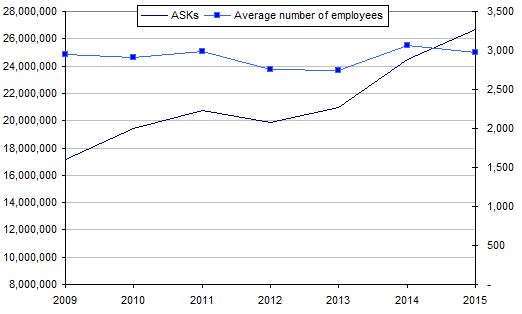 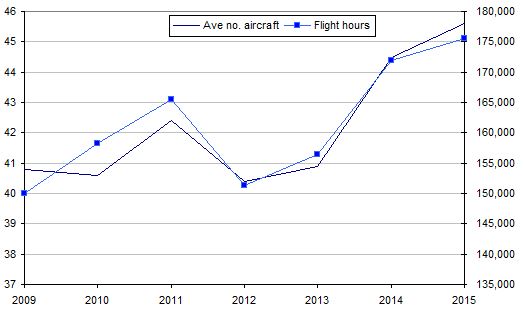 According to the CAPA Fleet Database Air Europa has a fleet of 54 aircraft with an average age of 8.5 years, as at 8-Jul-2016. The same source records a total of 48 aircraft a year earlier, more than the average of 45.6 for 2015, reflecting higher capacity needs in the summer season.

Growth in the fleet has mainly been driven by the need to add twin-aisle aircraft for Air Europa's long haul network, of which Latin America is the most significant part (see part 1 of this CAPA analysis). Widebodies account for more than half of its seats in service (as at 9-Jul-2016, source: CAPA Fleet Database).

Air Europa's aircraft orders indicate that widebodies will continue to increase their importance to its fleet. It is expecting delivery of the first aircraft from an order for 14 Boeing 787-9 aircraft in 2019. It also has orders for a further seven 737-800s for delivery between 2016 and 2018, and six Boeing 787-8s for delivery in 2016 and 2017.

It is expected that the 787s will eventually replace the A330 fleet and this should improve Air Europa's overall fuel efficiency. As noted in part 1 of this analysis of Air Europa, its Latin American network is its most important region and it is vital that its widebody fleet should be as competitive as possible.

If it eventually also means that Air Europa will operate an all-Boeing fleet with only two aircraft families (787 and 737) – apart from the regional fleet – this should also lead to economies of scale, although the opposite may be true during the transition phase from Airbus to Boeing while it operates a mixed widebody fleet.

The Globalia annual report gives revenue by division, but it does not give divisional profit details. This means that Air Europa's costs cannot be calculated. However, a reasonable estimate of its cost per ASK can be produced from its revenue per ASK.

Profit margins tend to be small in the airline sector and the difference between RASK and CASK for an individual operator is not usually more than a few per cent. Moreover, when plotting CASK versus average trip length for many airlines, errors of a few percentage points do not significantly change an airline's CASK position relative to others.

The chart below shows an indicative CASK position for Air Europa in USc as estimated by CAPA, compared with the trend lines for European FSCs, LCCs and ultra-LCCs (note that the scale on the vertical axis does not start at zero).

This suggests that when average trip length is taken into account Air Europa's unit cost is higher than that of European LCCs, although it may have moved closer to them in 2015. Air Europa certainly has lower unit costs than the average full service airlines having a similar average trip length.

As observed earlier in this report, the current downward trend in unit revenue is a market characteristic for most airlines, and is in no small measure due to lower fuel prices. For Air Europa it probably also reflects return to growth by Iberia, its main competitor on long haul routes, particularly in Latin America.

Air Europa competes in long haul markets mainly on price, offering a value-for-money product, certainly by comparison with Iberia. Both in volume and price terms it benefited from Iberia's capacity contraction during that airline's restructuring, but it may need to be more aggressive with its prices now that Iberia is growing once more.

In addition, competition from LCCs on Spain-Europe – where Air Europa is only the number six airline by seats (week of 4-Jul-2016, source: OAG) – puts pressure on its unit revenue to converge on the LCC trend line.

Against this backdrop continued CASK reduction is vital. This is understood by Air Europa management, as indicated by its Boeing 787 orders and its labour productivity improvements. A boost to Globalia's capital base, and more commercial partnerships for Air Europa, would also give it greater flexibility to meet its challenges.