Air Europa's 28-Jun-2016 launch of a new daily Madrid-Bogota service returns the spotlight to its Latin American network. This is the airline's most important route region both by capacity and by revenue, and it remains at the heart of its future plans. Air Europa has 13 Latin American destinations – compared with Iberia's 19 – and has been linked with plans for several more.

By seat capacity on Spain-Latin America Air Europa is half as big as Iberia but its share has increased by 10ppts over the past decade, while Iberia's has fallen. Iberia was four times Air Europa's size in this market in 2006. Nevertheless, a re-energised Iberia remains a formidable competitor and there is a small, but growing, band of new entrants.

Air Europa's parent company Globalia is reportedly considering an IPO, having previously been in talks with HNA Group about a possible investment by the Chinese conglomerate. Air Europa is likely to defer plans for the launch of routes to China while it concentrates on Latin America.

According to the Globalia 2015 annual report Air Europa increased its scheduled ASKs by 9% in FY2015, continuing its robust growth, albeit at a more modest pace than the 17% increase of FY2014. Note that the group's financial year end was October up to and including 2014, while FY2015 coincides with the calendar year.

Air Europa's passenger load factor gained 0.2 ppts to 84.0%, although this did not fully recover the previous year's decline, and load factor remained slightly below its 2013 peak of 84.5%. This load factor puts it comfortably ahead of the global industry average of 80% and 5.3ppts above its own FY2011 level.

The capacity increase in FY2015 was driven more by international routes, where ASK growth reached 10%. Total domestic capacity grew by 4%, driven by an 11% increase on mainland Spanish routes and 20% growth on routes to the Balearic Islands, partially offset by a cut of 1% on routes to the Canary Islands (where Air Europa's capacity in ASKs is equal to its mainland and Balearic capacity combined). 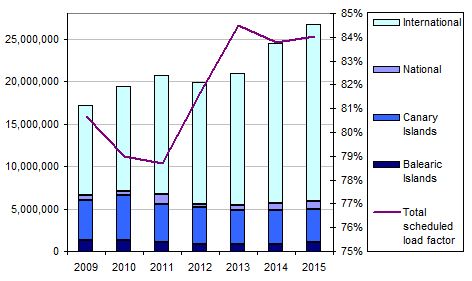 The Globalia annual report does not break down international ASKs by region, but this segment is dominated by Latin America.

According to OAG data for the week of 4-Jul-2016, Latin America accounts for two thirds (67%) of Air Europa's international ASKs, Europe accounts for 19%, and North America for 14% (it also has a very small amount of capacity in the Middle East and Central/Western Africa).

Full details of Air Europa's accounts are not separately disclosed, but Globalia's annual report shows the group's revenue by business segment. The Air Division of the Globalia group – which consists of Air Europa – generated revenue of EUR1.5 billion in FY2015 (calendar year), which was a 3% reduction on the figure reported for the previous financial year (year to Oct-2014) in spite of capacity growth.

This was the first drop in revenue for Air Europa since FY2009, after which revenue growth was driven by international routes until FY2014. 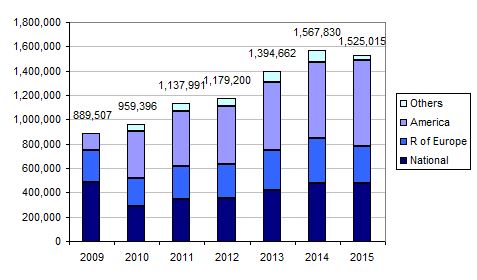 Within international revenue the contribution from the rest of Europe dropped by 16% in FY2015, after growing consistently from FY2010 to FY2014. This was Air Europa's biggest fall in revenue from any of its main route regions in FY2015 and likely reflects the strength of competition – particularly from LCCs. The Jan-2016 launch of Air Europa Express may help it to compete in short haul markets, although its initial focus on domestic routes and Embraer 195/ATR72 aircraft limits its scope.

Revenue from this segment was 19% higher in FY2015 than in FY2009, but its 20% share of the total was below the 29% share that it had in FY2009. The rest of Europe segment is Air Europa's smallest major region by revenue, but still of strategic importance in supplying feed to the long haul network.

However, revenue continued to grow on the America network

Revenue on the ‘America’ network (most of this is Latin America) bucked the falling trend in FY2015, growing by 13%. America revenue was almost five times its FY2009 level in FY2015, taking its share of Air Europa's total revenue from 16% to 46% over the same period. From FY2009 to FY2015, America was responsible for incremental revenue of EUR564 million for Air Europa, out of a total increase of EUR636 million.

Air Europa continues to place America at the heart of its strategic thinking. Its target is reportedly to generate over 50% of its revenues from the Americas continent (El Economista, 31-May-2016).

According to data from OAG Schedules Analyser, Air Europa is number two to market leader Iberia by seats on routes from Spain to Latin America. Air Europa's share of seats is 22% this year, just over half of Iberia's 43%. Note that this is based on the combined winter 2015/2016 and summer 2016 schedules.

The two Spanish airlines dominate this market, with the highest-ranked Latin American participant – the LATAM Group – taking only 11% of seats, followed by Avianca with 8% (based on OAG data for the 12 months to the end of summer 2016).

Airlines ranked by share of seats from Spain to Latin America: 2016*

Following its merger with British Airways to form IAG in 2011 Iberia's restructuring programme involved significant capacity cuts. It cut its seat numbers to Latin America by 5% in 2012 and 14% in 2013, maintaining this lower level of capacity in 2014. Since then Iberia has returned to growth – by 7% in each of 2015 and 2016.

The main beneficiary of Iberia's reduced market share since 2010 has been Air Europa, whose share of seats increased from 15% in 2010 to 22% this year. This is only slightly lowered from 23% in 2014 and is stable against 2015. The rapid growth of other competitors has had a lesser impact on Air Europa's share than on Iberia's.

Note: as was the case for the 2016 market share ranking presented above, this analysis (and what follows) is based on 12 month periods to the end of the summer schedule in the year shown (i.e. the previous winter schedule plus summer schedule of year shown).

The two leading Latin American airlines in the market to/from Spain, Avianca (a codeshaer partner of Air Europa) and LATAM Group (and its constituent airlines in the LAN and TAM groups prior to its formation) have both increased their seat share since 2010, while their combined operation remains smaller than Air Europa in this market. The next two Latin American airlines, Aerolineas Argentinas and Aeromexico (both are Air Europa codeshare partners), have modestly reduced their share.

In addition to market share gains by LATAM and Avianca, a number of new entrants have come onto the Spain-Latin America market in the past five years, according to data from OAG.

Iberia is twice Air Europa's size in Latin America, but was four times its size 10 years ago

Iberia is Air Europa's most important competitor on its most important regional network. According to data from OAG, ten years ago Iberia had four times as many seats on routes between Spain and Latin America as Air Europa now has.

In 2016 Iberia is 'only' twice as big as Air Europa in this market. This ratio fell dramatically during Iberia's restructuring but has stabilised since 2014, when CAPA last analysed the Latin America networks of the two airlines.

Air Europa's biggest subregion of Latin America is now Lower South America, having overtaken Central America this year after a period of rapid growth. Air Europa is growing its seat capacity to Lower South America by 17% in 2016, when it will be more than twice its 2011 level (based on 12 month periods to the end of the summer season; source: OAG).

In 2016 Iberia has dropped back to its 2013 capacity; in fact the ratio of Iberia's seats to Air Europa's seats in Lower South America is at its lowest ever level of 2.0 times (it was more than 12 times a decade ago).

In the Caribbean – the airline's second biggest Latin America subregion by seats – Air Europa is growing seat capacity by 3% in 2016, according to OAG data. Iberia all but abandoned this market during its restructuring, cutting seat numbers by 69% in 2013 and 85% in 2014, since when it has staged a dramatic re-entry. Iberia is growing by 84% to the Caribbean in 2016, when its seat numbers will be within 7% of their 2012 level.

In spite of Iberia's strong growth over the past two years, the Caribbean remains the only part of Latin America where it is smaller than Air Europa. Iberia has 36% fewer seats than its rival in 2016.

In Upper South America, Air Europa's third biggest subregion, it is growing strongly in 2016 – by 25%, after two years of capacity cuts. Iberia is also growing at a double-digit rate (11%) in 2016, after cuts in each of the previous four years. This is the last region of Latin America in which Iberia has returned to growth following its restructuring.

Iberia still has twice as many seats as Air Europa to Latin America (based on combined capacity data for the winter 2015/2016 and summer 2016 schedules from OAG, as noted above).

However, the discrepancy in the number of Latin American destinations served from Madrid is less significant: Iberia has 19 and Air Europa has 13. By comparison with the Aug-2014 situation, before Iberia resumed growth and when CAPA last compared the two airlines in Latin America, Iberia has added five destinations (Cali and Medellín in a triangular route in Jun-2015, Havana in Jun-2015, Montevideo in late Aug-2015 and Santo Domingo in Sep-2014).

The added routes have brought the destination overlap between the two networks to eight cities in Latin America – Bogotá, Buenos Aires, Caracas, Havana, Lima, Montevideo, Santo Domingo and São Paulo. This is up from four in summer 2014 (and three in summer 2013).

Iberia is bigger than Air Europa by seats on five of the eight overlap routes, while Air Europa has the upper hand on three. Iberia's superiority is on Madrid to Bogotá (but Avianca is bigger than both on this route), Buenos Aires, Montevideo and São Paulo. Air Europa is bigger on Caracas, Lima and Santo Domingo.

Air Europa is reportedly planning a new Madrid-Cartagena service and a Madrid-Rio de Janeiro in competition with Iberia. Other Latin American destinations under consideration include Mexico City, Panama City, Guayaquil, Santiago (all currently served by Iberia) and Cordoba (via Asunción).

Air Europa has had market share success, but is feeling unit revenue pressure

Air Europa used the period of Iberia's contraction to increase its market share in its most important market, namely Spain-Latin America. It has held on to most of its market share gains since Iberia's return to growth in 2015, helped by its more value-oriented product.

However, new entrants are growing rapidly and Iberia's renewed competitiveness puts pressure on unit revenue, particularly on the overlapping Latin American routes that make up more than half of its total in the region.

Moreover, Spain-Europe is dominated by LCCs and Air Europa is a small player in a crowded market (it is ranked sixth by seats on Spain-Western Europe for the week of 4-Jul-2016, according to OAG), which poses challenges to its ability to feed its Latin America network.

Part 2 of CAPA's analysis of Air Europa will review its parent company Globalia's financial track record and examine the airline's unit revenue development in recent years. It will also assess its fleet and attempt to estimate its unit cost positioning relative to other European airlines.