Air China turns attention to international markets, but its profits are regional and domestic

Air China's hub at Beijing Capital is effectively at capacity for movements between 07:00 and midnight. Consequently the carrier is increasingly using its existing slots to launch international services that support its positioning as China's international flag airline; this also allows Air China to grow revenue, which in 2012 surpassed RMB100 billion (USD16 billion) for the first time. But these services, aside from Taiwan, offer only lower yields and faint glimmers of profitability – unlike the domestic heartland operations.

With Air China's domestic RPKs growing only 0.5% in 2012, the carrier is seeking to assure the market it has domestic growth opportunities left by expanding its hubs at Chengdu and Shanghai, although the latter is also constrained by slots. The Air China Group also has a portfolio of domestic carriers, including Shenzhen Airlines (the country's sixth largest), Shandong Airlines and Tibet Airlines. They account for about a third of the group's domestic revenue and most traffic growth.

Air China targeting long-haul – out of necessity and with opportunities

Beijing Capital Airport is Air China's largest hub but slot increases are becoming marginal as the airport is largely at capacity (about 83 movements an hour from 07:00 to 21:00) for most hours of the day. 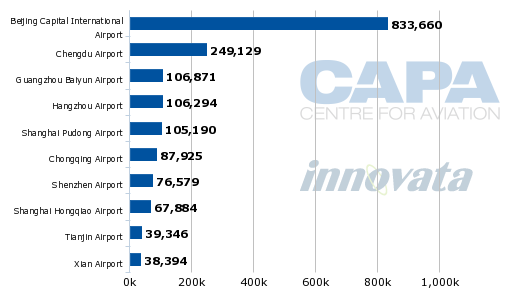 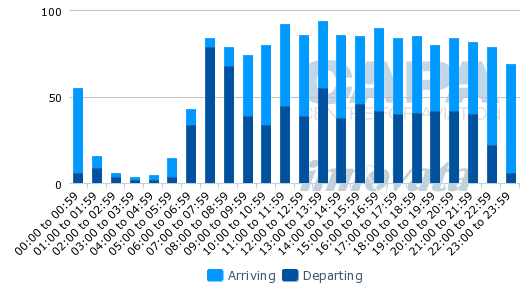 International flights, and especially long-haul flights, offer opportunities for greater revenue, allowing Air China to grow that figure, albeit not doing a lot for yeilds. Increasing long-haul service is also appropriate to the carrier's positioning as China's international flag carrier, representing China abroad – even if its thunder has been stolen by a rapidly increasing China Southern.

Still, Air China is the country's largest international carrier but smallest in the domestic market of the three main carriers, which also include China Eastern and China Southern.

Over the past decade, Air China's international movements at Beijing Capital have averaged 15% of its total movements. Air China started increasing that proportion in the middle of the last decade until the global financial crisis saw it shift growth to the domestic market. The absolute number of international flights has grown every year of the past decade, except 2009 when there was a slight dip. 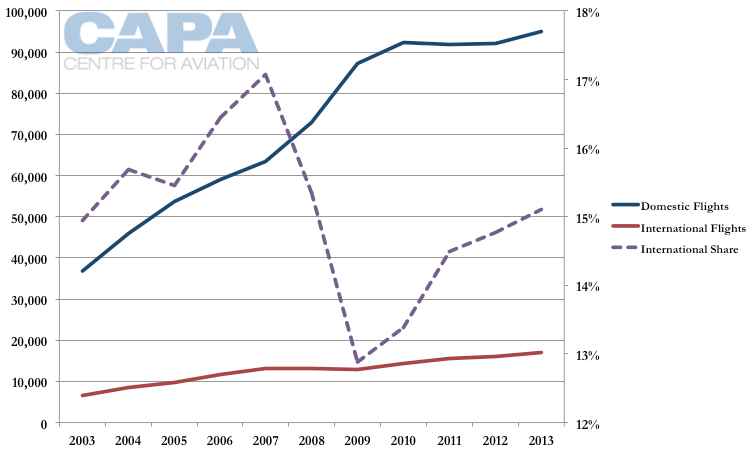 Air China is now shifting growth back to international markets, and these international sectors – even if in the same proportion as in 2003 – are becoming more apparent and greater since Air China is growing rapidly. The carrier is 24% larger than it was in 2009 based on passengers carried. And most of that growth occurred between 2009 and 2010. Afterwards slots at Beijing and other airports were difficult to obtain. No doubt Air China – and other carriers – would be far bigger today if only slots existed. 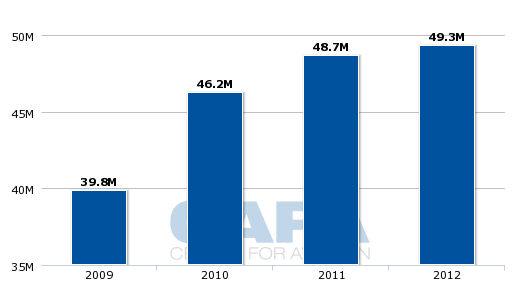 Its next biggest delivery year will be in 2014 when it plans to take delivery of 15 aircraft, including three 747-8Is, although net gain will be lower due to aircraft replacements (such as 747-400s).

Widebody aircraft comprise a quarter of the carrier's fleet. Not all are used internationally as A330s are a domestic workhorse for trunk (and slot-constrained) routes in China.

But domestic and regional is where the money is

International services have a significantly lower yield than domestic and regional flights. Regional yield is so high largely due to cross-Strait flights to Taiwan, where demand exceeds supply. Domestic yields decreased due to a slowdown at the start and then end of 2012. Notably domestic and international (excluding regional) yields decreased despite increases in fuel surcharges.

The market is becoming concerned with Air China's future profits as the carrier has limited growth opportunities, and where they exist they are being used to increase low-yielding international services. Air China and its peers should be able to make handsome international profits (their competitors generally do) but they lack international marketing (premium demand out of China is limited – most international travellers are on holiday) as well as savvy partnerships. This will not be the case forever, but the international growing pains will continue to be noticeable at a financial level. Outside of the financial world, Air China's growth will continue to be enjoyed by foreign airports but a concern for foreign carriers.

Shenzhen Airlines, and Air China's other subsidiaries, are growth opportunities

A third of Air China's domestic revenue came from its subsidiaries, including Dalian Airlines, Shandong Airlines, Shenzhen Airlines and Tibet Airlines. Air China has a pending subsidiary in Inner Mongolia for which it says it has completed the paperwork. Air Macau is also a subsidiary, operating primarily regional routes from Macau into mainland China.

Airlines posting increases in profits are few, even in Asia, but Air China is one of them. Its core airline business remains strong, with growth in the domestic Chinese and Taiwanese markets leading to a 31% increase in operating profits to RMB8.2 billion (USD1.3 billion) despite the poor state of cargo markets. Cargo yield declined 3.3% to RMB1.69 per RFTK while load factor decreased 0.23ppt from 2011 despite a 8.4% decrease in capacity.

There was also the downturn in Japan due to political spats that cost it around RMB200 million (USD32.2 million) in a single quarter and saw load factors dip to about 60%. Japan is one of the few consistently profitable international markets for Chinese carriers.

But Air China was greatly helped by a one-off RMB2.5 billion (USD395 million) decrease in asset impairment, the result – via accounting – of provisions in previous years being too high. Yet the Air China Group's net profit was down 35% as increased finance costs and decreased profit from Cathay Pacific dragged down the bottom line.

Air China reported growth in premium class revenue for every month of 2012 and says growth in January and February was 13% – good indicators on the revenue side, but on costs, there are worries.

Excluding fuel, unit costs per ASK decreased marginally from RMB38 cents (USD6.1 cents) to RMB35 cents (USD5.6 cents) (despite some one-off increases due to fleet renewal), but this is relatively flat over the past five years, and Air China's cost, like that of domestic peers, is bloated from inefficiencies considering potential. Nor is Air China's cost terribly admirable compared to global peers Air China will try to take on with international services.

Staff costs, the second largest, increased 11.2% as the result primarily of increased salaries, not headcount – a theme amongst Chinese carriers. Catering is also increasing as Air China looks to step up its service.

Air China in 2013 will start to face increased charges for international flights at Chinese airports, which China has allowed to be lower but now must equalise in compliance with World Trade Organization rules. As a partial remedy, domestic flights will receive a discount. Air China, as the largest carrier of international passengers but the smallest in the domestic market of the Big Three, is expected to see a negative impact. While Air China has tried to downplay this, charges could increase by RMB100 million (USD16 million) for the carrier.

The going is about to get tougher and growth through volume not as possible as it once was. S

o Air China is pivoting to grow through improved quality by increasing yield, yield mix and working on its premium offerings. Whereas putting an aircraft in the sky is comparatively easy, doing that smartly is far more challenging.

There is a world of best practices, if still emerging, for Air China to learn from, ranging from new generation partnerships to savvy yield growth and cost containment. Air China's challenge in coming years is to have performance catch up to growth volume.