Air China is building on its reputation as China's flag carrier with an expanded schedule to Europe, increasing frequency on existing services and also opening two new routes: Beijing-Geneva and Chengdu-Frankfurt.

Air China's service will be the first Chinese one to Geneva while Chengdu-Frankfurt represents the first route from a Chinese carrier originating in a secondary Chinese city. Several secondary Chinese cities - many of them very large - are growing faster than traditional coastal areas and have also been the expansion target – out of opportunity and necessity – of European airlines.

Air China, which of China's 'Big Three' has the largest portion of its capacity in international markets, will cement its position as the largest carrier between China and Europe, and twice that of its nearest competitor (and Star Alliance partner), Lufthansa. Air China is also the seventh largest carrier between Europe and Asia-Pacific, thanks to its service to a number of smaller European cities, where it holds market leadership, unlike in major cities where it is typically overshadowed by Europe's main hub carriers.

Air China's announcement of new services from Beijing to Geneva from 07-May-2013 with four weekly A330-200 services and three weekly Chengdu-Frankfurt A330-200 services build on its status as the largest carrier between China and Europe. The additional services follow a number of long-haul flights into China that were announced in late 2012 and early 2013.

Air China is also the seventh largest carrier overall between Europe and Asia-Pacific.

Air China's Chengdu-Frankfurt service is perhaps more strategically notable. Chengdu is the capital of Sichuan Province in western China and home to some of the highest growth in mainland China now that the country's traditional coastal growth areas are being relatively saturated. Etihad and KLM serve Chengdu, and in late 2012 British Airways and Qatar Airways announced they too would open flights to Chengdu. Not only is Air China tapping into growth, Chengdu's geography in western China can make connections more efficient: Frankfurt to Hangzhou, for example, via Chengdu is 450km shorter than via Beijing.

Connections are more favourable for western cities: Kunming from Frankfurt is 1,500km shorter via Chengdu than Beijing. The Chengdu-Frankfurt flight ties in to China's "Go West" economic programme. 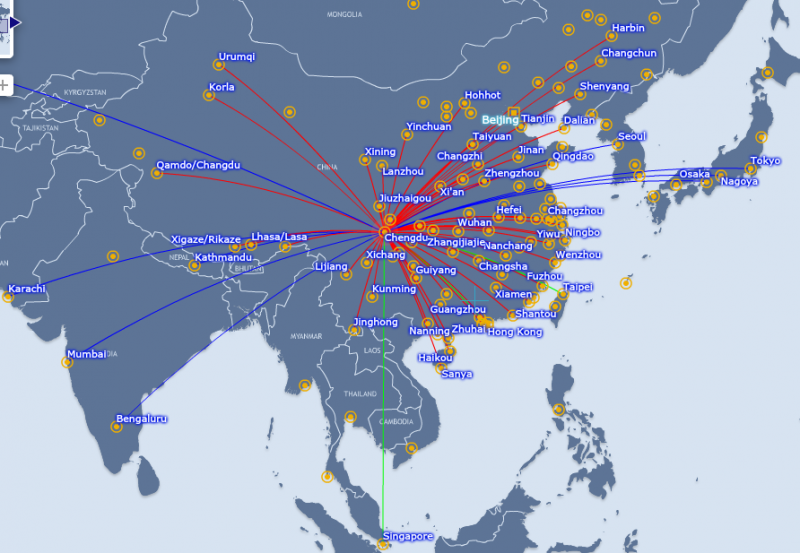 Source: CAPA – Centre for Aviation & Innovata
Note: Not all cities named due to space restrictions

Air China's presence at Chengdu meshes with Chengdu Airport's aspirations to be a network hub and is part of the airline's hub strategy of having a base in every major corner of the country: Beijing, Chengdu and Shanghai. China Eastern and China Southern replicate this strategy: China Eastern has a hub in Kunming while China Southern is far out west in Urumqi. Air China's Chengdu-Frankfurt service is the first from a Chinese carrier to a European point from a 'secondary' Chinese city (Chengdu's population is around 14 million). It is also one of the first intercontinental services offered by a Chinese carrier from a secondary Chinese city; others include Sichuan Airlines' Chengdu-Shenyang-Vancouver and China Eastern's Nanjing-Sydney. Sichuan Airlines will also commence connections to Melbourne in Australia later in 2013.

European carriers have led development in routes to secondary Chinese routes, out of opportunity but also necessity: Beijing and Shanghai are largely out of slots except for services during peak hours. Slots that become available are typically dispensed to Chinese carriers while they are also able to shift their slot portfolio around, such as re-allocating a domestic slot for an international flight if that is where expansion is occurring.

Although China's so-called 'Big Three' – Air China, China Eastern and China Southern – are all state-owned, Air China is the flagship and seen as a representation of China abroad. Of the Big Three, Air China deploys the most of its capacity (measured in ASKs) in international markets, although China Eastern is in very close second. China Southern in 2009 made a big push to increase its internationalisation, which has culminated with its much-discussed increased capacity to Australia, as well as Europe.

See related article: Air China builds its N American network while Hainan Air to use A330 instead of 787 to Chicago

Air China is leader overall but has advantage in smaller cities

The way European carriers have lately and largely been shut out of additional services in Beijing and Shanghai, Chinese carriers face challenges in certain European airports – London Heathrow, for example, where China Southern reportedly spent "years" trying to acquire slots.

Out of necessity and opportunity, Air China has looked at linking China with secondary European points, many of which see no other service to China, or even Asia. Air China like its peers wants to have a large role in sixth freedom traffic, using geographically advantageous hubs and potential for a low-cost base to offer an attractive proposition.

Indeed, an Air China marketing campaign in Stockholm focused on raising awareness that Air China flies to points besides China; Japan services were advertised in a Japanese restaurant.

Sichuan Airlines and Xiamen Airlines gear up for European services

Elsewhere with the Big Three, China Eastern is concentrating on expanding frequencies while China Southern looks to hopefully bring its A380s into European markets like Paris. China Southern in 2012 launched a Guangzhou-London Heathrow service.

There are still more growth stories to come. Sichuan Airlines and Xiamen Airlines are evaluating European markets. Sichuan Airlines, based in Chengdu and owned mainly by China Southern (39%) but also China Eastern and Shandong Airlines (itself partially owned by Air China), is reported to be interested in opening a Chengdu-Paris A330 service.

Xiamen Airlines, based in its namesake city, is awaiting 787 deliveries in 2014 to open long-haul routes. The carrier has historically been domestic with limited short-haul international services.

While much growth remains to be unlocked, a stumbling block will be China's one airline, one route policy, the effect of which is evident from major European carriers serving multiple Chinese cities but Chinese carriers typically linking a European city from only one Chinese city, leading them to be overshadowed by their European peers in key, high-yielding cities. Liberalisation, as is well established, leads to growth.