The majority of European carriers’ shares were down on Friday (30-Apr-2010), after wider markets fell on news of an analyst downgrade of Goldman Sachs and disappointing 1Q2010 results from Barclays Capital. A drop in mining sector shares also pushed markets lower.

Aer Lingus (-1.0%) was down after Chairman, Colm Barrington, stated market conditions "remain difficult" in 2010. However, Mr Barrington added that changes implemented by the carrier are "already contributing to improved operating results and cash protection, which will be enhanced as the economic environment improves". Mr Barrington also stated Ryanair’s (-0.4%) 29.11% ownership in Aer Lingus was "damaging to the interest of the shareholders of both companies".

British Airways (-0.7%) also slipped on news Unite has commenced balloting the carrier’s 12,000 cabin crew members on the latest offer from management. Unite provided a strong recommendation that they reject the proposal.

Joint General Secretary, Tony Woodley, stated there are three main reasons why crew members should vote to reject the offer, including the refusal to full restore travel concessions, the carrier’s disciplinary action against over 50 crew members and the union’s “loss of trust” in BA’s commitment in finding a solution to the dispute.

The consultative ballot of BA cabin crew members will close on 07-May-2010. The union reportedly plans to discuss a new industrial action strategy this week, with new strike dates to possibly be announced the day after the UK general election, should staff vote against the latest offer. Unite is reportedly considering strike action of up to 12 days. 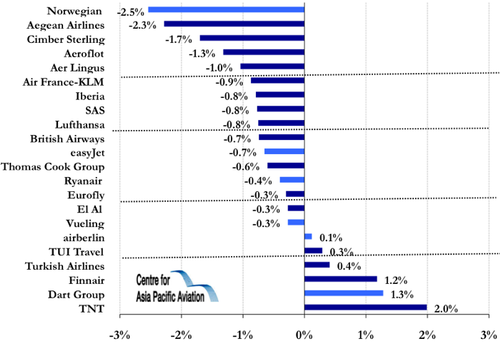