Alitalia is poised to bolster its position in its home market through the planned acquisition of smaller Italian carriers Wind Jet and Blue Panorama. If the recently announced deals are completed, Alitalia stands to increase its total market share to about 27%, cementing its position as Italy’s leading passenger carrier.

The acquisitions will also result in increased low-cost competition in Italy as Alitalia expands its presence in the budget sector through the new subsidiary companies.

Alitalia stated there are potential synergies with Blue Panorama and Wind Jet, with the airlines having complementary networks, markets and products. Alitalia will be submitting its plan to Italy’s Antitrust Authority for approval prior to the acquisitions being presented to the governing bodies of the three airlines.

The Italian market is highly fragmented, with no single carrier accounting for more than a quarter of total capacity. There is a mix of full service and low-cost carriers controlling significant portions of the market. Alitalia itself currently accounts for only 19% of total capacity, which makes it the second largest carrier in Italy following Irish low-cost carrier Ryanair, which has a 20.8% capacity share. But when factoring in Alitalia's LCC subsidiary Air One Smart Carrier, Alitalia is now slightly larger in its home market than Ryanair with a 21.9% capacity share

The acquisitions of Wind Jet and Blue Panorama should ensure that the Alitalia group remains ahead of rival Ryanair. Wind Jet is currently Italy’s sixth largest carrier with a 3.7% share of the market while Blue Panorama (including Blu-express) is currently the 12th largest carrier in Italy with 1.3% capacity share, according to Innovata data. As a result, the acquisitions will increase total group capacity at Alitalia to about 27%. 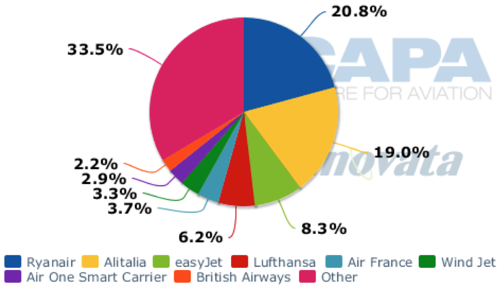 Alitalia now holds the leading share of capacity at its Rome Fimucino base with 46.8%. The addition of Blue Panorama and Wind Jet will increase Alitalia’s share at Fimucino by approximately 5%, making it the dominant carrier with an over 50% share. 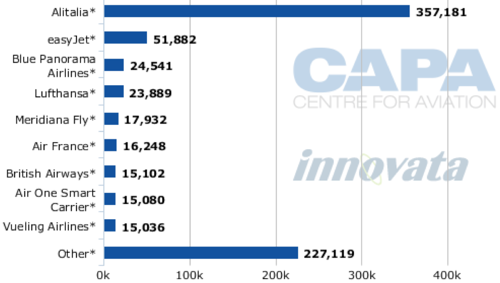 Other significant increases will be seen at other important Italian airports. At Wind Jet’s base at Catania Fontanarossa Airport, the Alitalia group currently holds 25.8% of capacity (which includes a 5.6% share for Air One). With the acquisition of Wind Jet and Blue Panorama, this stands to grow to a dominating 76.2%. 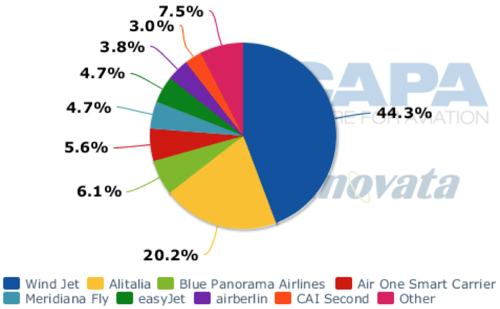 Alitalia is majority owned by private consortium Compagnia Aerea Italiana (CAI) with SkyTeam partner Air France-KLM holding 25% of the carrier. The airline operates an extensive domestic Italian and Western European network as well as services to North and South America, Africa and Asia. While Alitalia’s network spreads throughout the world, it is heavily focussed in Western Europe with 57% of its international capacity (seats) allocated to routes within Western Europe.

Blue Panorama to extend Alitalia’s network to the Caribbean

Blue Panorama Airlines operates a mix of charter and scheduled services from Rome to destinations throughout the Caribbean and Western Europe. Blue Panaroma also has a Fiumicino-based LCC unit in Blu-express, which operates short- and medium-haul services. 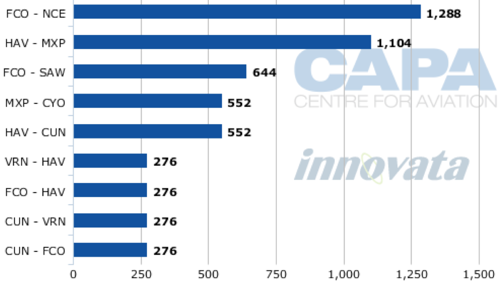 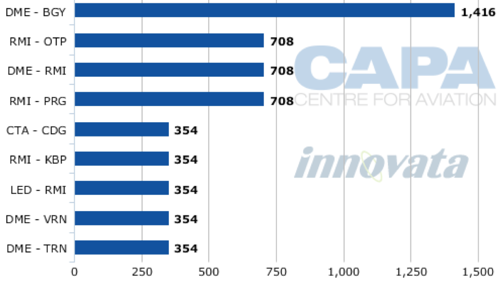 Wind Jet combined with Blu-express will also give Alitalia a larger presence in the fast-growing budget airline sector and allow the group to better compete against LCCs operating to/from Italy. While Alitalia already has an LCC subsidiary in Air One, the carrier is significantly smaller in the Italian market than two foreign LCCs – Ryanair and easyJet. The acquisitions, if approved, will allow Alitalia to more effectively compete against Ryanair and easyJet via Wind Jet and Blu-Express, specifically to target the budget sector while keeping the Alitalia brand for full service operations.

There are now over 20 LCCs operating into and from Italy, five of which offer over 100,000 seats per week. In order, they are: Ryanair, easyJet, Wind Jet, Air One Smart Carrier and Wizz Air. The overall capacity held by full service carriers is 52.2% with low-cost carriers close behind at 44.5%. The relatively small Blu-express operation is counted in these figures under full service because it a division of Blue Panorama rather than a separate subsidiary and therefore operates with the same code as Blue Panorama.

The LCC penetration rate in Italy is currently 40.7% for the international market and 47.7% for domestic market. The Alitalia group now has a very limited presence in this market with Air One.

Alitalia is currently comprised of five airlines: Alitalia-CAI, Alitalia CityLiner (previously Air One Cityliner), Alitalia Express (CAI-First), Air One Smart Carrier and CAI-Second (previously Volare Airlines). This structure followed Alitalia - Linee Aeree Italiane and Air One being purchased in 2008 by CAI. These acquisitions resulted in a more diverse fleet for the Alitalia group.

While Alitalia’s subsidiaries Air One Smart Carrier and CAI-Second also operate A320 equipment, Alitalia Cityliner and Alitalia Express operate a mix of Bombardier CRJ and Embraer E-Jet equipment. The CRJs, however, are in the process of being phased out and replaced with E-Jet equipment.

The purchase of Wind Jet offers fleet synergies as the carrier now operates A319s and A320s like Alitalia and Air One. But the addition of Blue Panorama will see more types added to the operating list. Blue Panorama now operates two 757-200s and four 767-300ERs while subsidiary Blu-express operates two 737-300s and four 737-400s. The carrier also has eight SSJ-100 aircraft on order, slated for delivery by 2015.

It is likely Alitalia will choose to retire the 737s at Blu-express, replacing them with A320 family aircraft. This would give the group’s low-cost operation a common fleet, with A320s at Air One, Wind Jet and Blu-express. As each of these operations is relatively small, Alitalia may also look to integrate and adopt one budget brand for the entire group.

Alitalia may hold off on replacing Blue Panorama’s 757s and 767s (the two are a common type) until it retires its own 767s. The SSJ-100s currently on order at Blue Panorama don’t align with Alitalia’s fleet strategy. It will be interesting to see if Alitalia keeps this order intact or opts instead to acquire more E-Jets.