Setback has Single European Sky looking like pie in the sky

The European Commission VP for Transport, Siim Kallas, announced at the end of Oct-2010 that the commission has been forced to withdraw proposals for environment, capacity and cost-efficiency goals for European Air Navigation Service Providers, due to opposition from EU Member States. Workers groups, such as the European Transport Workers’ Federation, also came out against the ATM performance targets as outlined by the Performance Review Body to the European Commission

The withdrawal of the proposed targets is a significant setback for the Single European Sky. It shows again the difficulties that the pan-European programme has to face in overcoming the intractability of national governments and other bodies seeking to protect local interests.

The second legislative package of the Single European Sky (SES II) came into force on 04-Dec-2009, but key provisions of the SES performance scheme are yet to be put in place. According to the SES II plan, actionable performance targets are due to be set before the end of the year. 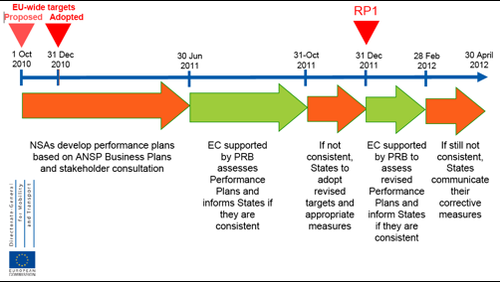 EU-wide performance targets are adopted by the Commission at least 12 months prior to the start of the first performance reference period. These EU-wide targets will drive the performance plans which are established at national or Functional Airspace Block level, based on the recommendations of national authorities. The European Commission and the EU SES Performance Review Board will then review these plans to see if they conform with the EU-wide targets.

Is Europe setting the wrong targets?

Arguments against the performance targets were that they ignored local needs, focused on efficiency rather than safety and failed to take into account the affect of the economic downturn on ANSPs. After dipping 6.6% year-on-year in 2009, air traffic levels are not expected to return to pre-recession levels until the end of 2012. 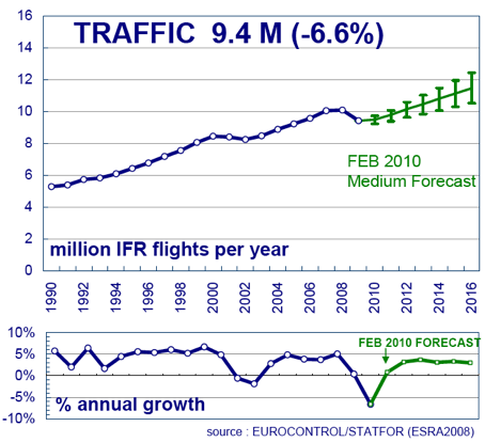 In early Oct-2010, CANSO described the Single European Sky objectives for 2011-2014 as “unrealistic”. CANSO European Members believe the methodology and tools used to draw conclusions and to set concrete and binding targets are not sufficiently mature. In particular, the period used for the benchmarking analysis - 2003-2008 - only includes growth years for the air transport industry without considering the impact of negative events.

CANSO members also believe that the conclusions of the analysis leading to the cost efficiency target proposal take into account a number of factors, including necessary investments in capacity, market saturation aspects, airspace complexity, long-term investment cycles and the high percentage of fixed costs in ANSPs’ business. 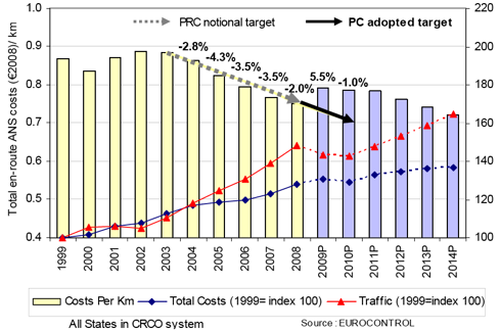 The significant under-recoveries in costs by ANSPs in 2008 and 2009 are expected to be passed on to airspace users over the next few years. EUROCONTROL estimates that en-route ANSP costs jumped by 5.5% in 2009, even as IFR flight numbers fell by 6.6% in the year. ATFM delays also plummeted in 2009, down from 1.4 minutes per flight to 0.9 minutes per flight, thanks to the low flight numbers relieving pressure on the system. 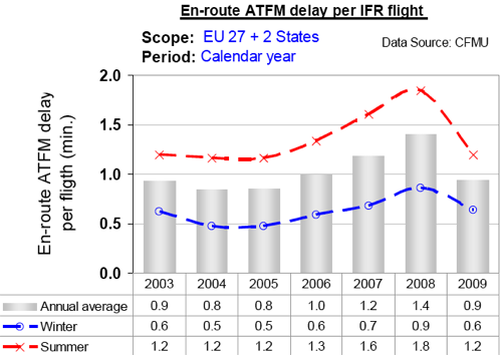 With the opposition from Member States hardening, the momentum generated earlier in the year for fast-tracking SES – thanks to the airspace closures by the Icelandic volcano – is now in danger of petering out. According to Mr Kallas this negative outcome, coupled with worrying feedback on the development of European Functional Airspace Blocks, “shows that the implementation of the Single European Sky is at risk”.

The news that the Commission has withdrawn its proposals quickly brought reactions from airline representative bodies. Airlines have the most to gain from full implementation of SES and cost-efficiency improvements in European ATM.

According to estimates by the Association of European Airlines, the fractured and inefficient nature of European air traffic management system is costing European airlines an additional EUR3.3 billion a year – out of a total of around EUR9.5 billion in direct costs - and creates 16 million tonnes of avoidable CO2 emissions.

AEA Secretary General, Ulrich Schulte-Strathaus, argues that the absence of full implementation of SES is “anti-European, anti-consumer and anti-environment”.

However, AEA acknowledges that the performance targets are ambitious and will require “continuous political commitment to ensure a swift delivery of the benefits to the airlines”.

IATA has urged EU member states to honour their commitment to implement the SES programme, stating that the industry cannot endure any further delay in fixing Europe's ATM system. The organisation was quick to note its dismay at CANSO’s objections to the cost efficiency targets.

The International Air Carriers Association Director-General, Sylviane Lust, voiced concerns that while national governments are willing to talk of adherence to the goals of SES, when pressed on actual reforms and measurable goals, European government’s “pull away”.

Airlines don’t just want SES in place, but the want it implemented as quickly as realistically possible. According to the IACA Director-General: "If [European Governments] are serious about the competitiveness of the network, they have to deliver now."

On 20-Oct-2010, the new Aviation Platform – formed in reaction to the chaos in Europe surrounding the Eyjafjallajökull eruption – met in Brussels. The group consists of diverse representatives from all segments of the industry. Representatives from Skyguide, NATS, Air France-KLM, British Airways, easyJet, Lufthansa, EADS, ENAV, ACI-Europe and transport and pilots unions with Mr Kallas to give strategic advice to the Vice President.

Coming out of the meeting were several points, but among the main conclusions were agreement that the European Commission should:

Vice-President Kallas also decided to establish a high-level group on aviation research to look into the specific challenges faced by the aviation sector in air traffic management.

Mr Kallas expressed his fears this month that opposition against the efficiency targets for ANSPs, particularly Europe-wide targets, could result in serious delays to the SES programme. The lack of commitment to the efficiency goals is "worrying" and "could create serious delays" in the project.

Mr Kallas believes Europe need to further improve the competitiveness of its aviation industry in line with the needs of the Single European Transport area. Coordination of investment efforts is needed particularly in the modernisation of air traffic management, timing and synchronisation of investments and governance structures of the SES research programme and deployment.

European governments' rejection of the ANSP targets was mostly are based around concerns over a lack of specificity. However, the targets only related to the European network level and only served as reference for the future setting up of national plans and targets.

Extending SES outside of Europe

While the Commission is dealing with intractable European governments, it has a long-term goal of extending SES well beyond Europe’s borders. The principles of SES need to be extended to cover cooperation with the ATM systems of close European neighbour countries, the US NextGen systems and the ATM networks of countries further afield such as in Asia.

Ukrainian Minister of Transports Konstantin Efimenko, is pushing for his country to join SES. The Ukraine still needs to meet all the requirements imposed by the European Union, but the minister believes that an agreement for the integration of Ukraine in SES will be signed in 2011.

A question of competitiveness

The key drivers of SES reform are competitiveness, safety and capacity. Europe needs to reform its airspace and the way it manages its ANSPs in order to create a system that places less of a financial burden on its airlines, creates a safer environment to operate in and results in less delays for passengers.

Without full, and prompt, implementation, European airlines will struggle with the burden of high than necessary ATM costs, fractured airspace and the associated costs of inefficiencies. The next round of the battle for SES comes in Dec-2010, as the European Commission goes before the Council of Ministers and then to the European Parliament. The final decision here may just decide how competitive European ATM is for the next two decades.