Spirit Airlines will mark a milestone in Jun-2012 when it introduces flights from its growing base at Dallas Fort Worth International Airport to Toluca, Mexico. Currently most of Spirit’s international flying is operated from its Fort Lauderdale headquarters, as part of a strategy the carrier adopted during the middle of the last decade to build the airport as an alternative gateway to Miami for service to Latin America and the Caribbean.

Part of Spirit’s tactics included offering lower fares to those destinations than American Airlines, which remains the dominant carrier in Miami. Spirit for many years had a singular focus on penetrating central America, northern Latin America and the Caribbean to capture the significant volumes of visiting, friends and relatives traffic (VFR) that transited to southern Florida, and now offers flights to roughly 25 international destinations from Fort Lauderdale. It adopted a no-frills model that allowed it to offer appealing low fares to that passenger segment and co-exist with American in the Miami metropolitan market.

Now Spirit appears ready to replicate part of that strategy elsewhere in its network as it prepares to introduce daily flights from Dallas to Toluca, which is 72km from Mexico City and is considered an alternative airport to Mexico City International Airport. Spirit’s decision to enter this market is low risk, since it already serves Toluca twice per week from Fort Lauderdale. Spirit has an established presence in the Mexico City market, so not a lot of financial expenditure is necessary to build up Spirit’s brand awareness.

Spirit’s decision to offer daily service from Dallas to Toluca reflects more favourable traffic patterns from the southwestern US to Mexico. Carrier CEO Ben Baldanza told CAPA sister publication Airline Leader last year that the “Mexican affinity has always been more Southwest and the West Coast. So over time some of the things we are doing will give us the ability to think about Mexico to the west coast the same way we talk about Fort Lauderdale to the Caribbean”.

The Mexico City market offers a prime example for Spirit to practice its strategy of deploying assets where fares are high and incumbent carriers are struggling to cope with high costs, which is the situation bankrupt American finds itself in at Dallas Fort Worth. The lowest cost for a Spirit roundtrip flight from Dallas to Tolcua for travel from 16-Jul-2012 through 18-Jul-2012 is USD273 while the lowest fare on American from Dallas to Mexico City is USD653. Spirit’s flight times are at the undesirable hours of a 23:22 departure from Dallas and a return of 03:20 from Toluca, but Spirit’s targeted passenger base is willing to tolerate the less convenient flight times to save on ticket costs.

That dynamic is what allows Spirit to exist peacefully with American and other majors it has taken on with its new market launches within the last year. Its strategy is to offer just enough capacity to capture the passengers it stimulates with its lower fares. The number of seats Spirit will offer in the Dallas-Toluca market with either 145-seat A319s or 178-seat A320s will be a fraction of the 5880 seats American plans to offer in the Dallas-Mexico City market when Spirit inaugurates its new Mexico flights on 21-Jun-2012. 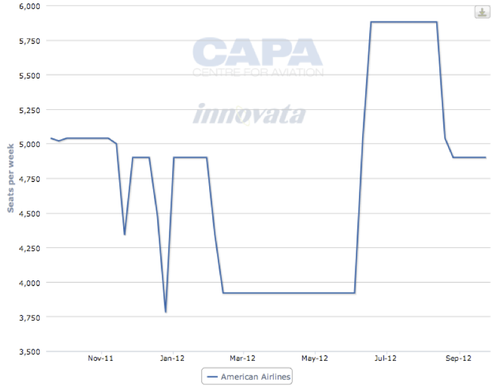 As Spirit broadens its network to more US western cities it will likely look at more opportunities to stimulate traffic to Mexico with its lower fares. Mexico City is the fourth largest international destination in terms of seat share from Las Vegas, where Spirit recently opened a crew base. Spirit could beat the largest carrier in Las Vegas, Southwest Airlines, to become a first mover US low fare carrier in the Las Vegas-Mexico market currently served by Mexican carriers Volaris and Aeromexico. 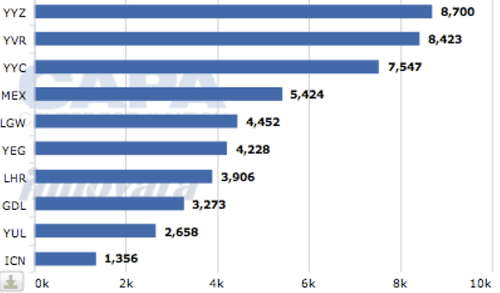