Spirit Airlines executives have concluded consolidation in the US has created a prime opportunity for its ultra low-cost business model to allow the carrier to invade legacy strongholds like Dallas Fort Worth and introduce limited flights that will allow Spirit to grow the market with lower fares instead of poaching passengers and creating a structural shift in the competitive landscape. At the same time, Spirit is also developing its more typical niche markets to round out a network focus dominated by domestic growth during the past couple of years.

Spirit has turned its attention away from growing Caribbean and Central America services from its Fort Lauderdale hub to capitalise on some of the 300 non-stop markets between Canada and the northern region of South America that have more than 200 passengers per day each way. These markets, like northern New York state airports close to Canadian cities, can support the 18% annual seat growth Spirit aims to achieve through 2015.

This year Spirit has announced plans to serve the legacy and low-cost strongholds of Minneapolis and Denver and has bolstered its push from American Airlines’ hub in Dallas Fort Worth, which began in 2011.

Once its flights from Dallas to Denver begin in May, Spirit will serve four of the top 10 markets from Dallas in terms of available seats offered, competing with beleaguered American Airlines on flights to Atlanta, Chicago, Denver and New York. In Feb-2012, Spirit inaugurated flights to another top market from Dallas Fort Worth when it launched service to Phoenix Mesa, a secondary airport also served by Allegiant Air, which is located 48km southeast of Phoenix Sky Harbor International Airport. 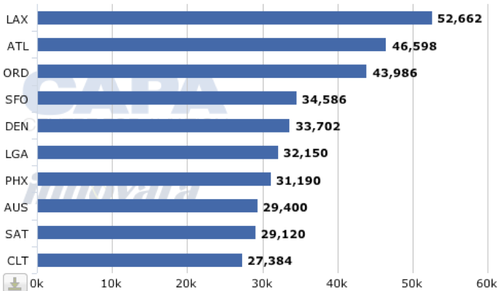 Spirit sees a prime opportunity in American’s stronghold, and highlights it has more domestic and international overlap with the carrier than any other US airline. Spirit management admits the overlap is somewhat by design as the carrier looks to deploy its assets where fares are high and incumbent carriers are struggling to cope with high costs, a combination that perfectly describes American at Dallas Fort Worth. Virgin America also realised the hub-captive status of Dallas Fort Worth passengers when it launched services there.

Percentage of international and domestic markets that overlap with American Airlines 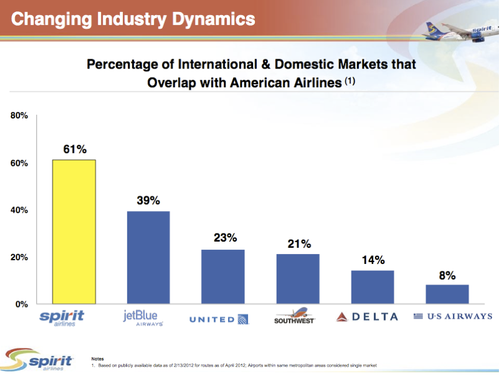 Spirit is basing its network strategy on an equation that entails using its cost advantage to enter a market and lower fares by a baseline of 25%.  Spirit concludes that this creates about 40% of market stimulation, which equates to roughly two to three flights per day with its Airbus narrowbody aircraft.

Applying that logic to its new flights beginning in May from Minneapolis St Paul to the Chicago market – dominated by United Airlines, American and Delta Air Lines at O’Hare and Southwest Airlines and Delta at Chicago Midway – Spirit argues it can make an entry with a fare level that has not been available to customers for quite some time. Offering just three flights per day, Spirit believes it has sized that market to support the projected growth resulting from lower fare stimulation, allowing Spirit to grow the market rather than re-distribute the market's existing size.

Spirit’s service pattern in Denver also adheres to the belief of only adding enough capacity to support the stimulated traffic. In May it is launching daily service to Chicago, and Fort Lauderdale and twice daily service to Dallas and Las Vegas. Spirit in May-2012 will also introduce a daily flight from Minneapolis to Las Vegas.

Spirit takes great effort to stress it leaves the fight for market share to airlines that are trying to attract corporate customers, and therefore need the network footprint and frequency level to retain those passengers.

Spirit concludes its product rests solely on offering its low fares to customers that are singularly focussed on price. The carrier stresses it makes no difference if it is the largest airline in a market or the 10th largest, as long as it turns a profit.

It does not view itself as a threat to major carriers as it ushers in a lower pricing structure to a market, and only offers enough capacity to absorb the stimulated passengers. Its strategy is reflected in its once daily flight from Dallas to Atlanta that began last month. Spirit’s weekly seat offering in the market is approximately 10% of Delta or American's. 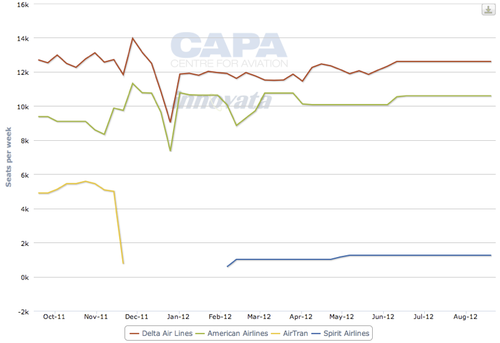 However, the stimulation can only work if Spirit maintains its significant cost advantage that allows it to offer fares to capture the new traffic. The carrier’s 2011 unit cost excluding fuel of USD 5.72 cents was the lowest in the US industry, but the highest it recorded since 2007, and it expects unit costs to increase from USD 5.97 cents to USD 6.02 cents during the first quarter of this year. Its highly price sensitive passenger base, most resistant to fare increases, could also deteriorate if fuel costs continue to climb.

At the same time Spirit is trying to stimulate markets dominated by legacy airlines and other LCCs, it is balancing those new routes with niche markets like Latrobe, Pennsylvania. Characterised by the carrier as an “exploratory market” and Pittsburgh's alternative airport, Spirit on 17-May-2012 will introduce flights from Latrobe to Orlando, Florida. (Spirit will use the more common Orlando International and not Orlando Sanford, an alternative Orlando airport favoured primarily by European charter carriers and Allegiant Air.) Spirit inaugurated flights from Latrobe to its Fort Lauderdale base in 2011. It also offered seasonal service last year from Latrobe to Myrtle Beach, South Carolina, a market Spirit has served since the 1990s.

Spirit last year also exhibited classic LCC behaviour when it launched flights from Niagara Falls and Plattsburgh, New York as respective alternatives to Toronto and Montreal, Canada. Spirit’s pattern in Plattsburgh is a move to squeeze as much ultilisation from its aircraft as possible. The flight departs Spirit’s Fort Lauderdale base at 22:00 and lands in Plattsburgh at 01:00 and departs after a quick turn at 01:40 for a 05:00 landing in Fort Lauderdale. Spirit admits the flights are aimed at frugal Canadians willing to travel during the middle of the night to take advantage of the lower fares it offers compared with Air Canada. Spirit's advantage is also that the flights are domestic and not trans-border, and thus not exposed to international taxes. Spirit's Fort Lauderdale-Niagara Falls return service has approximately USD50 in taxes while Air Canada's return Fort Lauderdale-Toronto service has USD110 in taxes.

Shifting away from Fort Lauderdale

Spirit admits its growth from Fort Lauderdale in 2011 was not as robust as it has been in past years, and recently declared it sees better opportunities in other markets to attain the financial benchmarks it has set for itself. So far in 2012, it has only detailed Denver-Fort Lauderdale flights as part of plans to enter the Denver market with flights to its four largest bases (Chicago O'Hare, Dallas/Fort Worth, Fort Lauderdale and Las Vegas).

Even as its focus has shifted away from Fort Lauderdale, Spirit still offers the largest number of seats from the airport. But its dominance is not as pronounced as other carriers presiding over their respective hub markets. 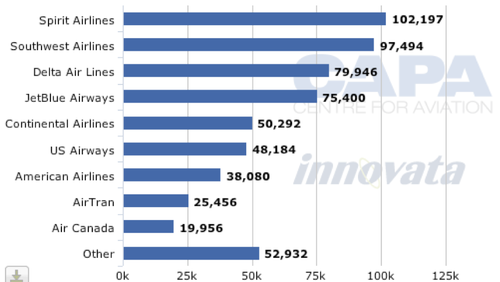 Often dubbed the Ryanair of the US, Spirit clearly does not suffer from being all things to all passengers. It has a clear line of sight on the demographic it is targeting through its planned double-digit growth throughout the next few years. It holds a firm belief its price-sensitive customer base accounts for the majority of traffic in the US. Illustrating its philosophy, Spirit CEO Ben Baldanza recently quipped that “more people eat at McDonald’s than Morton’s”. 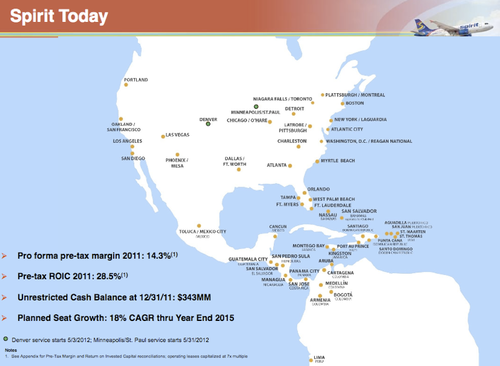