Will 2009 be a record year for aircraft deliveries? Airbus and Boeing slug it out

Between them, Airbus and Boeing have delivered 500 aircraft over the first six months of 2009, an avalanche of capacity that is exacerbating yield pressures as demand weakens amid the global economic crisis. While the pace of new orders has slowed almost to a crawl this year (Airbus netted 68 firm orders in 1H2009, Boeing had just one), deliveries by the two major manufacturers look close to equaling or bettering the all-time record, set in 1999, of 914 aircraft.

This is not to mention the output of smaller manufacturers, such as Embraer (67 commercial aircraft deliveries in 1H2009), Bombardier (approximately 60 commercial aircraft) and ATR (approximately 20 aircraft). While most of these smaller manufacturers have already cut production levels (by as much as 20% in some cases) other manufacturers, such as Sukhoi (with its new SSJ-100 regional jet, co-developed with Italy’s Alenia) and Russia’s giant UAC, are also seeking entry into the western airliner market.

Airbus, with 254 deliveries in 1H2009, is reacting to the pressure that airlines are under due to the global recession. Earlier in the year, it reversed a previously planned production increase. From late 2009, it will freeze A330/A340 widebody production at 8.5 aircraft per month (instead of increasing to 11 per month), while the A380 production schedule for 2010 has been cut from 18 to 14 aircraft, although this is as much due to continued manufacturing problems than market pressure. Several carriers have also delayed their A380 delivery plans, most recently British Airways, which is alleviating some of the pressures on this programme.

On the other hand, the European manufacturer made it clear at last month’s Paris Air Show that it is ready, and willing, to increase production when conditions improve, although it is still unclear on the economic picture for 2010 and beyond. It is also currently in negotiations with the UK, Germany, France and Spain to secure financing support for its A350 XWB programme. European governments are reportedly willing to commit up to EUR3.3 billion of the EUR11 billion needed for the programme.

Boeing, currently struggling to get the B787 in the air, delivered 246 aircraft in 1H2009. The manufacturer is retaining current B737 production levels for the time being, comfortable with its seven-year backlog of orders. However, Boeing's B777 production rate will be reduced from seven to five per month from Jun-2010. Plans to increase B747 and B767 production levels have been placed on hold.

The B787 remains the great unknown at the moment, with Boeing set to announce a new test flight date and delivery schedule shortly. With the latest delay to the test flight, questions are now being raised if Boeing will stick to its Feb-2010 delivery target for the first aircraft to All Nippon Airways. If the test flights throw up anything unexpected, deliveries could be pushed back even further.

Boeing is getting its house in order for B787 production, signing a deal this week to acquire Vought Industries’ South Carolina plant, which manufactures B787 aft fuselage sections. The move straightens out (somewhat) part of the complicated B787 supply chain, and possibly provides the foundation for a second B787 assembly line, once the aircraft moves into full rate production. 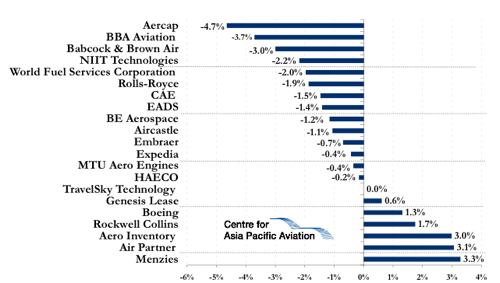