Canada’s WestJet recently celebrated achieving an investment grade rating from Standard and Poor’s, a worthy accomplishment given the short list of carriers that have managed to reach that important milestone.

The endorsement is a reflection of WestJet’s strong performance in several key financial metrics, and its successful management of debt and liquidity levels while it has undertaken substantial changes to its business during the last year which include the launch of its new regional subsidiary Encore.

But in the short-term WestJet is facing some cost pressure, driven in part by its new business initiatives, mainly Encore, that have some time before reaching full maturity. Despite the cost creep the carrier assures that its business fundamentals and the Canadian market place remain strong. The carrier has built a strong foundation to weather the challenges, but ultimately it needs to keep costs in check to fully enjoy its new-found investment-worthy status.

WestJet recently declared that its CY2014 unit cost would increase 1.5% to 2.5% versus previous estimates of a flat performance to a 1% increase. The carrier attributed the increase to headwinds created by currency fluctuations between the CAD and USD.

The carrier concludes that the spot exchange rate will essentially sit at CAD1.10-1.11 to the USD for most of 2014, and every one cent change in the exchange rate affects its annual unhedged operating costs by CAD13.3 million.

WestJet also attributes some of the cost pressure to the short-haul operations performed by its new carrier Encore. The new regional subsidiary debuted in Jun-2013 and by the end of Aug-2014 aims to operate 100 daily departures to 18 destinations, including an expansion into eastern Canada from Toronto to Thunder Bay and Winnpeg.   While the short-haul operations negatively affect WestJet’s unit costs, carrier CFO Vito Culmone recently explained to analysts that Encore is a positive contributor to WestJet’s unit revenues. Even with the revenue gains from Encore, WestJet’s unit revenues fell 1.6% in CY2013.

Mr Culmone remarked that despite the cost creep, WestJet believes it still retains a strong cost base. While it recorded a unit cost decline year-on-year in CY2013 to CAD9.06 cents, WestJet is putting additional distance between its current cost base and a low of CAD8.29 cents during 2008. Added to WestJet’s cost pressure is a highly touted initiative by rival Air Canada to lower its unit costs 15% in the medium term. Its unit cost excluding fuel in CY2013 were CAD11.6 cents.

That is still an ample gap, but with Air Canada charging ahead with an aggressive unit cost reduction target and WestJet’s costs rising, the gap is certain to grow smaller over time.

Some of the costs WestJet is incurring should ultimately translate into higher revenues as it harvests the benefits of Encore (it recently converted five Bombardier Q400 options  for a total of 25 aircraft by YE2015), an its new fare bundles that feature premium economy. As WestJet add layers of complexity that firmly entrenches it in the hard-to-define hybrid business model space, its costs will inevitably rise.

The key is ensuring its revenues grow at a faster clip. WestJet’s top-line revenues grew at a healthy clip of nearly 7% year-on-year in 2013. But its unit revenues fell 1.6%, which reflects the short-term pressure WestJet is encountering as its transition from a pure LCC continues. Mr Culmone also remarked that overall it cost an extra cent per ASM to operate in Canada versus the US due to various Canadian government policies.

Even as WestJet has been battling cost and unit revenue pressure for the better part of a year, its fundamentals have remained strong, illustrated by its elevation to investment grade.

Its cash to trailing 12M revenue was 34% at YE2013, the second best among North American carriers and its leverage ratios stood at 1.53x. The carrier has also issued dividends and share buy-backs consistently since 2010, which is also largely uncommon among North American carriers. WestJet’s much larger partner Delta Air Lines issued its first dividend in a decade during 2013.

WestJet's liquidity and leverage versus other North American carriers: YE2013 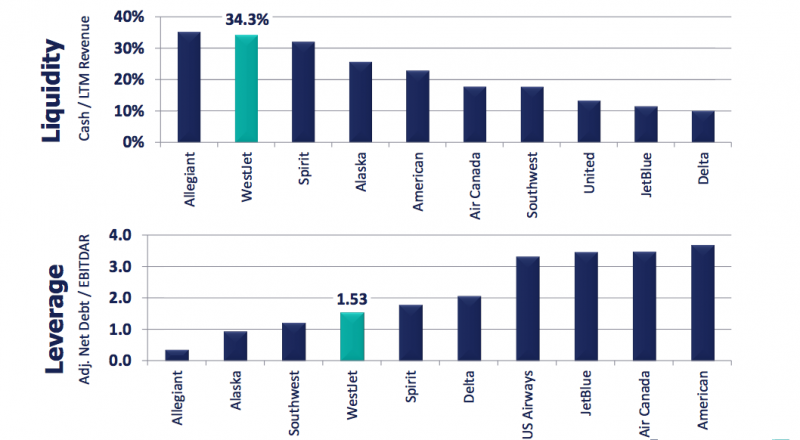 WestJet is still justifying up to 6% capacity growth for 2014

After 8% capacity growth during 2013, WestJet plans to slow its ASM expansion in 2014  to an increase of 4% to 6%, half of which is dedicated to expansion by Encore. Mr Culmone assured that double-digit capacity growth is definitely not in WestJet’s sights, and stressed that WestJet was committed to responsible growth.

During the last few months the carrier has been defending its planned expansion while Air Canada has opted to slightly pare down its Canadian domestic capacity growth in 2014.

Mr Culmone explained that although there are concerns regarding personal debt levels in Canada, the domestic market is reasonably healthy. Based on Canadian GDP growth in 2013 of 2% to 2.5%, he believes traffic should grow 3% to 3.5%. However, the carrier has purposely built in ample flexibility into its fleet plan in order to mitigate pressure created by changes in the market place.

Beginning in 2015, the number of aircraft in WestJet’s fleet eligible for return to lessors will steadily grow, allowing the carrier by 2013 to have a fleet of 120 737s to 164 narrowbodies. WestJet has said the optimal number of Q400s for Encore is 45, but it also has the choice not to exercise options if the market conditions in the Canadian and US transborder markets worsen.

Both of Canada’s major carriers are crafting paths to sustainability

WestJet has exceeded its 12% return on invested capital (ROIC) target for six consecutive quarters and recorded returns of 13.9% for CY2013. It has no plans to increase its return targets as it believes it has declared sustainable return goals.

Aside from small hiccups, WestJet has managed the launch of Encore and its new fare bundles fairly well without too much balance sheet destruction. The new investment grade ranking should also allow the carrier to get favourable rates on some of the capital investment it is undertaking during the next few years.

Both of Canada’s largest carriers – Air Canada and WestJet – are making moves to ensure the relative stability of the Canadian market place and build sustainable business models to attract investors over the long-term. Both airlines have their own set of individual challenges that need to be overcome; but each carrier has laid out a seemingly rational path to attain much-needed stability.

Of course the real tests lie in executing those respective strategies, and devising ways to address challenges head-on. For the moment WestJet sits on a stronger financial foundation than its rival, and appears determined to keep that advantage over the long term.