Canada’s largest airline Air Canada has revised its outlook for 1Q2014 to a slightly more favourable performance after its cost and revenue metrics beat initial expectations.

Air Canada’s encouraging revisions to its 1Q2014 projections are against a backdrop of a falling CAD against the USD, which is creating mixed results for the carrier. The outlook of Air Canada’s rival WestJet is markedly different – it expects costs to rise and unit revenues to remain flat or increase slightly during 1Q2014 as it believes currency fluctuations will dampen its results.

The operation of higher density aircraft, protections in place to combat the swings in Canada’s currency and tempered capacity growth helped Air Canada change its outlook for 1Q2014, but the carrier is still expected to report a quarterly loss. After the initial excitement of better-than-expected cost and revenue performance wears off, the loss is what will linger in investors’ minds.

As the end of 1Q2014 drew to a close, Air Canada issued guidance for improved EBITAR, cost and revenue performance, along with some slight capacity revisions. Instead of a CAD15 million (USD13.7 million) to CAD30 million (USD27.4 million) decline year-on-year in EBITAR, Air Canada now expects its performance in that metric to be on par with 1Q2013 when the carrier recorded EBITAR of CAD145 million (USD133 million).

The carrier cited some minor network adjustments that are driving its capacity growth down slightly for CY2014. During 1Q2014 Air Canada’s 3.8% capacity growth was on the lower end of its projected 3.5% to 4.5% increase. For the full year, the carrier has revised capacity growth from 7% to 9% to 6.5% to 8%. Air Canada now expects its domestic supply to expand 6.5% to 8% instead of 7% to 9% growth.

Its revised domestic supply is likely driven in part by the depreciation of the CAD against the USD (which on 8-Apr-2014 was USD1 to CAD1.9 ), which may be driving some softness in demand. In the early days of 2014 Air Canada and WestJet were able push through some fare increases, but it is not a given that pricing traction will remain intact.

Roughly half of WestJet’s planned 4% to 6% capacity growth during 2014 is dedicated to its new regional subsidiary Encore, which is perhaps creating a slight capacity imbalance in the domestic space. Air Canada may have recognised slight oversupply and opted to trim is own ASM growth within Canada in 2014.

During 4Q2013, Air Canada’s domestic yields fell 4% driving a nearly 4% decrease in its unit revenues for the region. During 1Q2014 its domestic traffic grew roughly 2% on nearly 4% capacity growth, which drove load factors down 1.8ppt to 80%. 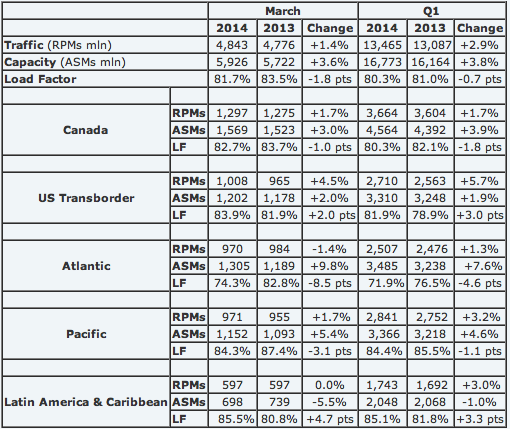 Air Canada could have traded in loads for yields during 1Q2014 on its domestic routes, but with Canadian markets representing almost 40% of its revenue, the carrier needs to keep a favourable supply-demand balance to ensure it effectively manages its revenue performance.

Air Canada has already revised its capacity guidance for CY2014 twice. Originally, its ASM were forecasted to rise 9% to 11%; but the carrier lowered its estimates after it scrapped plans to add more service from Toronto to Beijing in light of being assigned unfavourable slot times in Beijing. The carrier has previously stated it is not necessarily a negative outcome, given its capacity growth in Pacific markets was 28% year-on-year in 4Q2013. That region was Air Canada’s worst performing geography during the last three months of 2013 as yields fell 4% and unit revenues decreased 7%.

Even as it curtails some planned Pacific expansion, the bulk of Air Canada’s capacity growth in CY2014 is being dedicated to international markets as six Boeing 787s are added to its fleet and the carrier has full deployment of five higher-capacity 458-seat Boeing 777-300ERs, which the carrier says offer a 21% reduction in unit costs compared with the existing 777-200LR widebodies featuring seating configurations of 270-seats and its two-class 777-300ERs with 349 seats. The higher-density widebodies feature three classes – executive first, premium economy and standard economy.

The higher-capacity 777-300ERs are deployed on routes with a higher volume of leisure travellers including Montreal-Paris. Recently Air Canada CEO Calin Rovinescu remarked that prior to deploying the aircraft on that route in 2013, it was one of Air Canada’s worst performing markets, but the new aircraft has reversed the carrier’s fortunes on the pairing, and now it is one of Air Canada’s best performers.

Mr Rovinescu remarked that as Air Canada was engaged in 2014 planning in Nov-2013, the company factored in a weaker CAD going forward. But the carrier did not anticipate the exchange rates that have occurred during the last few weeks.

As previously reported by CAPA, Mr Rovinescu stated that Air Canada has outflows of roughly USD4.5 billion in 2014. But the carrier is in the midst of converting revenues in other foreign currencies in USD and also has a 50% exchange rate hedge.

There is some upside to the currency fluctuation as a weaker CAD usually corresponds with lower fuel prices, said Mr Rovinescu, and inbound tourism also strengthens, providing another natural layer of hedge against the deteriorating CAD. Air Canada’s higher level of international operations should help alleviate some of the currency pressure expected to linger throughout 2014. Air Canada expects the CAD to trade at 1.11 to the USD for CY2014.

All of those hedging initiatives alongside other cost reduction strategies resulted in Air Canada raising its unit cost reductions year-on-year for 1Q2014 to 2% to 2.5% versus previous estimates of a 1% to 2% decline. Its unit cost decrease for CY2014 of 2.5% to 3.5% remains intact after the carrier recorded a 1.5% decline (excluding fuel) in unit costs for CY2013.

The carrier’s encouraging unit cost trends run counter to estimates from its rival WestJet, who cited currency headwinds as the main driver of its projected 1.5% to 2.5% rise in unit costs for CY2014. Previously, WestJet had concluded it can offset some of the pressure through ancillary product sales, but said it would not tack on any surcharges to offset the weaker CAD. Air Canada has instituted surcharges on its vacation packages to combat the currency pressure.

As Air Canada continues to post a favourable unit cost performance, its cash position and leverage ratios also remain in decent shape. Its CAD2.4 billion in cash at YE2013 was 19% of its trailing 12M revenues and its adjusted net debt to EBITAR ratio was at a six-year low for CY2013 of 3x. 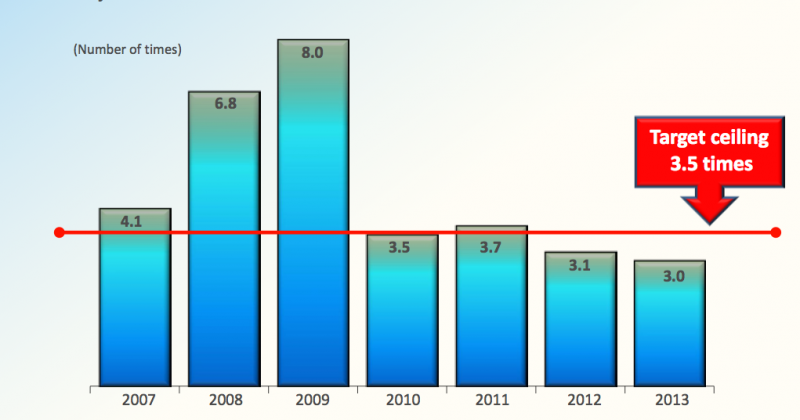 But countering some of that positive performance is an increase in Air Canada’s debt levels of roughly 4.8% year-on-year at YE2013. The rise is attributable to investments in the 777 and 787 widebodies and the currency fluctuations affecting the carrier’s debt denominated in the USD.  Air Canada believes the long-term benefits of the investment in new aircraft outweigh the current pressure on its balance sheet.

The incorporation of those aircraft is a key element in Air Canada’s stated goal of driving down its unit costs by 15% in the medium term. 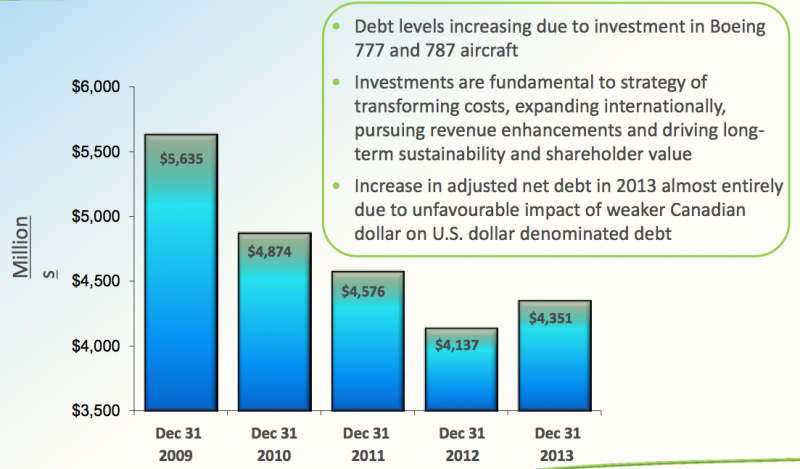 Air Canada deserves considerable credit for improving its fortunes during the past few years after getting uncomfortably close to a formal reorganisation in 2009 as headwinds battered the company. Its work to regain some stability has often been painful, and it is still too early to be certain that the carrier has successfully executed the necessary culture change to ensure long-term stability.

But in the short term the carrier is taking the right steps to endure the inevitable small shocks that occur in the airline business. And while the airline is no doubt relieved that some of its important metrics are on the upswing, Air Canada rightfully admits that the only measure of true stability and shareholder gain is consistent profitability – an aspiration the carrier still needs to deliver on.