Thai Airways remains bullish on its outlook for 2011 despite reporting traffic declines for 1Q2011 and remains committed to embarking on a massive fleet renewal programme.

The newly-released Mar-2011 data cap a lacklustre quarter for Thai. For 1Q2011, RPKs were down 3.5% with a 2.8% increase in capacity, resulting in a 6.1 percentage point drop in load factor to 76%. The domestic market was particularly weak in the quarter, with RPKs on domestic routes down 14.7% in 1Q2011 and the domestic load factor dropping 10.4 percentage points to 74.7%.

But Thai expects traffic to begin tracking a year-on-year increase this month and is confident of a rosier final nine months of the year. The carrier is projecting a 7.6% increase in RPKs for Apr-2011 on a 7.4% increase in capacity, resulting in a 0.1 percentage point improvement in load factor to 72.2%.

For the year, Thai is projecting RPKs will be up 8.1% on a 6.7% increase in capacity. As a result Thai’s load factor is expected to improve by 1.4 percentage points to 74.6%. 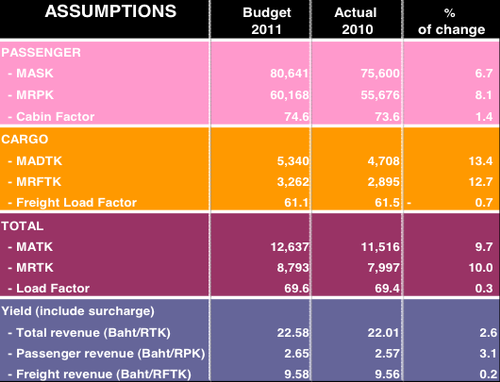 Thai’s ongoing project to improve revenue management is also expected to continue to result in yield improvements. Thai is projecting its passenger yield, which has been steadily improving over the last two years, will improve a further 3.1% in 2011.

Revenue management is one of several areas Thai has been focusing on as part of its restructuring and turnaround plan. Several parts of this plan were already implemented in 2010, including what Thai refers to as “quick wins” in products and service improvements.

Thai’s revenues surged in 2010 by 12.4% to THB184.26 billion (USD6.16 billion) while net profit more than doubled from THB7.343 billion to THB15.350 billion. Thai credits the improvement in profitability to its new network plan, which involved axing unprofitable routes and handing some domestic routes to low-cost affiliate Nok Air, as well as cost controls and an increased focus on Internet sales. Thai, which has been profitable every quarter since 3Q2009, saw its net profit margin improve to 8.5% in 2010.

Further improvements in profitability are anticipated as Thai continues to implement its restructuring plan. Thai aims to achieve another THB20 billion (USD669 million) in annual cost reductions by 2012 through further improving efficiencies and productivity. Initiatives are underway to reduce reservation costs and personnel and crew costs as well as to improve fuel management and renegotiate supplier contracts. Thai is also continuing to implement its new commercial strategy, which includes increased focus on revenue management, dynamic pricing, online sales, social media and mobile services.

Thai is also implementing changes to its organisational structure to enable greater decision making flexibility and more performance-based rewards. The use of key performance indicators (KPIs) was extended to all directors in 1Q2011 and is being extended to station managers in 2Q2011. More pieces of Thai’s new network plan are also being implemented this year as several routes are increased to daily including Bangkok to Auckland, Brisbane, Milan and Gaya/Varanasi in India. More schedule adjustments as well as development of new routes are expected over the next six years as Thai aims to strengthen its network, further improve yields and grow its market share.

Fleet simplification is another major component of its Thai’s restructuring. Retirement of ageing aircraft types began in 2010, with the retirement of four A300-600s and delivery of three new B777-300ERs. The acquisition of new aircraft and phasing out of ageing aircraft is being accelerated under a revised fleet plan which was just approved by Thailand’s cabinet.

Thailand’s cabinet on 20-Apr-2011 approved a proposal to acquire 75 additional aircraft. Thai will have the flexibility to lease or purchase these aircraft. Exact aircraft types have not been specified, but Thai has indicated it will acquire a mix of Airbus and Boeing aircraft.

The 75-aircraft acquisition plan also includes a second batch of 38 aircraft for delivery between 2018 and 2022. Thai has not yet specified which size aircraft are to be acquired as part of this final phase of its long-term fleet renewal project.

The new aircraft also are an important part of Thai’s plan to improve its in-flight product and become a leading Asian carrier. Thai is also embarking on a cabin retrofit programme as part of this plan. 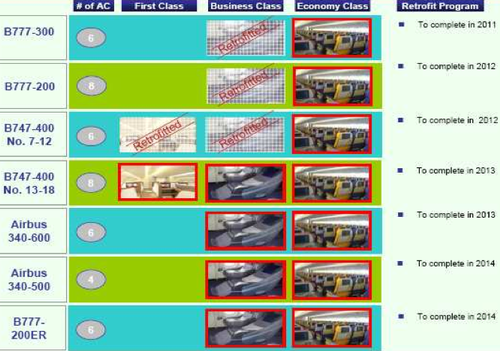 The cabin retrofit project is expected to cost THB2.3 billion while the 75 aircraft being purchased comes with a budget of THB457.1 billion. Thai’s improving profitability should help the carrier access the financing required for such a massive investment.

While its recent traffic figures haven’t been rosy, Thai has been impacted by the 11-Mar-2011 earthquake and tsunami in Japan. Thai has seen load factors on its Japanese routes drop by about 20 percentage points on average. Some of the demand, however, has shifted to Thai’s routes to China and South Korea, which are up about 10 load factor percentage point on average.

In response to the worsening conditions in some markets and rising fuel prices, Thai is taking several measures to ensure it maintains its current level of profitability. This includes an increase in fuel charges this month. Fuel surcharges are being increased by 47% to 52%, depending on the route, to between USD28 and USD162.