Mr Borghetti said: “As we enter a new era for Virgin Blue it is vital that we have the right aircraft on the right routes if we are to fully exploit our competitive advantages in the context of the group’s three core business: domestic short haul, international medium haul and international long haul.

"We are adding capacity to routes with strong revenue potential and accordingly, removing capacity from services which are underperforming. These changes will maximise yields, increase aircraft utilisation and also provide a more attractive schedule for the business market, including better integration of our international and domestic schedules."

In an interview with Business Day, Mr Borghetti, commented that the “prospects of it turning a profit [in the New Zealand domestic market] are not good so there really is no point continuing”. There are three airlines competing in the New Zealand market, which has just 4 million people, with Air New Zealand CEO, Rob Fyfe, predicting for some time that one of the players in the market (namely Virgin Blue) was likely exit the market.

Mr Borghetti declined to reveal the extent of the losses, stating only that they had been in the tens of millions of dollars since it began there about three years ago.  Mr Borghetti also insisted that Virgin Blue’s planned commercial agreement with Air New Zealand on trans-Tasman services had nothing to do with its decision to pull out of New Zealand.

V Australia to focus on long-haul with US, South Africa and Thailand

Mr Borghetti stated: “By restructuring our Pacific Blue operations we are now able to free-up our long-haul V Australia aircraft to capture the growing demand for travel to the US.”

V Australia, by year-end, will be “fully devoted to international long-haul business more suited to the B777 fleet”, with Fiji services to be taken up by Pacific Blue from mid Oct-2010.

The carrier stated that recent changes to its flight patterns and frequencies now provide more than 490,000 additional seats across the Virgin Blue domestic network.

The carrier is offering more capacity and frequency on eastern seaboard capital city routes, and to key tourist destinations such as the Gold Coast and Uluru. It is also increasing capacity as part the bilateral agreement with SkyWest, expanding its reach into the burgeoning West Australian intrastate market. Meanwhile, Mr Borghetti stated there are more developments in the pipeline to increase domestic competitiveness and further announcements would be made in due course.

Shares in the carrier gained 1.7% on Friday, but are down 1.7% in early morning trading today.

In response to Virgin Blue’s decision, Jetstar announced it would significantly grow its domestic New Zealand operations over the next year "solidifying its position as New Zealand’s second airline".

Jetstar Group CEO, Bruce Buchanan, said: "Jetstar is to further expand our fledgling domestic New Zealand operations. We plan to further grow our existing domestic NZ routes and will investigate new destinations in line with our strong and expanding market presence since commencing domestic flying in June 2009. Jetstar has embedded itself as one of NZ’s two domestic airlines and as the clear low fares leader we will continue to invest in new services and growth."

The airline has announced it will position an additional two A320 aircraft in New Zealand within the next 12 months, bringing its fleet of New Zealand-based aircraft to eight. A seventh aircraft will enter service in Dec-2010 with an eighth anticipated to commence at the end of 2010, early 2011.

Jetstar stated its seventh A320 aircraft will support more domestic and trans-Tasman flying including the launch of Melbourne-Queenstown, Gold Coast-Queenstown and Auckland-Cairns flying, as well as incremental Auckland-Wellington and Auckland-Queenstown services. Mr Buchanan said Jetstar would look to build more frequencies from existing key ports in Auckland, Christchurch and Wellington with an expanded domestic operation “well in place” in advance of the 2011 Rugby World Cup.

Jetstar currently operates on five domestic NZ routes between Auckland, Christchurch, Wellington and Queenstown and a trans-Tasman network commercially supporting 10 routes. Announcements regarding aircraft scheduling with the additional fleet will be made in the near future.

Meanwhile, ECM Libra Investment Research stated it expects AirAsia’s revenue for 2Q2010 to increase by an estimated 16% year-on-year, due to higher fare and traffic levels. It added that this would mean the carrier’s first half revenue would reach 50% of the carrier’s revenue target for the year.  Shares in the carrier increased 2.6% yesterday. 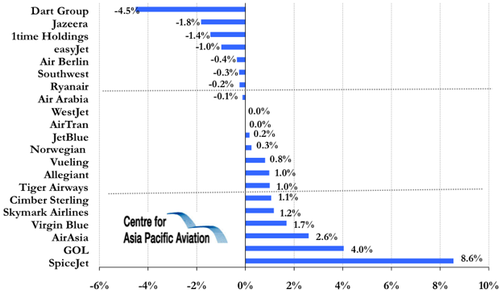