Vietnam is one of several countries in Southeast Asia where, on the surface at least, it appears as if the government is keen to attract both domestic and foreign investors to its airports portfolio. That appearance might be a little misleading, though.

Aéroports de Paris, which then became Groupe ADP in 2017, looked to tie up a deal with ACV whereby Groupe ADP would acquire a 7.4% equity stake (later 20%) in ACV and make long term investments there. The government approved the deal but it was then stalled by both ACV and Groupe ADP owing to multiple disagreements.

The Vietnamese government currently owns 95.39% of Airports Corporation of Vietnam (ACV), with the remaining 4.61% held by both local and foreign investors. Now, while Ministers are saying that they still welcome investment, the government is proposing to buy back the few shares in ACV not owned by the state, thus effectively nationalising it.

ACV was all but nationalised as it is

Vietnam's Ministry of Transport has proposed buying back all non-state-owned shares in Airports Corporation of Vietnam (ACV) to return the airport operator to 100% state ownership.

In fact, it is almost there already. The Vietnamese government currently owns 95.39% of ACV, with the remaining 4.61% held by both local and foreign investors. The Ministry has said that making ACV a wholly state-owned enterprise would ensure higher standards in aviation security, which hints bizarrely at a problem with the minority investors.

ACV operates under a parent company-subsidiaries model, managing 22 airports nationwide, of which seven are international airports. 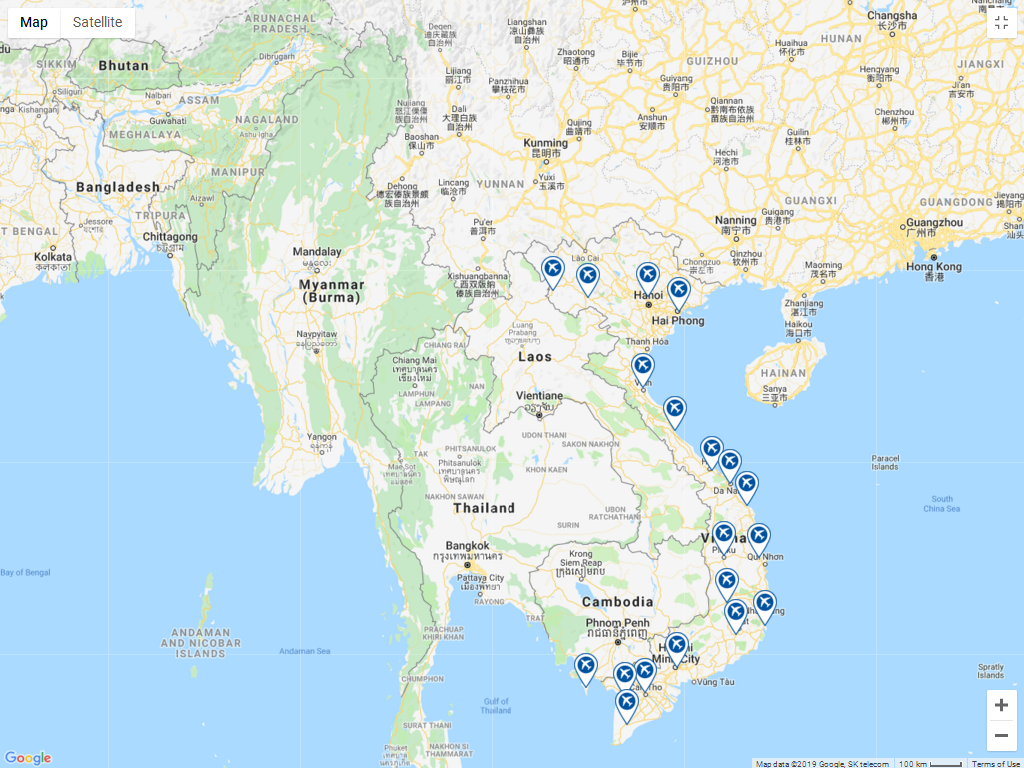 Source: CAPA Centre for the Aviation
Note: not all domestic airports are shown.

Vietnam is not alone in grappling with a privatisation conundrum

Vietnam is one of several Southeast Asian countries that are coming to terms with the need to improve their airport infrastructure while at the same time grappling with what has become almost the metaphysical concept: whether or not their airports should be under public or private control.

If Vietnam was seriously seeking to attract private capital, even the closing of four and a half per cent of its share capital back to the state sends out a peculiar message.

One problem has been that in Southeast Asia generally western hemisphere investors remain disinclined to venture outside their comfort zone, and participation in purchases and concessions tends to be made by local companies.

There are a few exceptions and one of them is France’s Groupe ADP’s interest in ACV, but that fell through over various disagreements. A domestic IPO on the Airports Corporation of Vietnam closed in Dec-2015, raising approximately USD50 million. The corporation then went on to seek a strategic investor with the intention of listing further on the Hanoi Stock Exchange.

Groupe ADP was offered up to 20% of ACV

Aéroports de Paris, which then became Groupe ADP in 2017, looked to tie up a deal with ACV whereby Groupe ADP would acquire a 7.4% equity stake (later 20%) in ACV and make long term investments there.

An open skies policy between Vietnam and France was also on the cards. A stake of 20% is a realistic aim for a company like ADP – the point at which it can assert real influence.

In India, where foreign company shareholdings have been as low as 10%, frustration has been expressed about the lack of real shareholder muscle.

The government approved the deal but it was then stalled by both ACV and Groupe ADP owing to multiple disagreements. This transaction was never completed, which is perhaps why ADP turned its attention later to Japan, Kuwait and Jordan instead.

Despite this hiccup (the tie-up with ADP would have gone hand-in-hand with a further share sale of ACV), the Ministry of Transport was adamant about that sale and was backed up by the Ministry of Planning and Investment, which proposed divestment from 406 state-owned enterprises between 2017 and 2020, including from Vietnam Airlines and ACV, as part of the Government's public investment plan.

The Ministry of Transport would sell 35.16% of its 86.16% stake in Vietnam Airlines by 2019 and divest 30.4% of its 95.4% stake in ACV between 2018 and 2020. The Minister of Transport described this divestment of Government stakes as “a good chance for foreign investors to join the local aviation market”.

It now appears that there has been a fundamental volte-face in the government’s thinking.

The Deputy Prime Minister went on to say at the time that the Vietnamese government wanted domestic and foreign investors to invest in airport infrastructure in Vietnam. He noted the considerable growth in the Vietnamese aviation sector in recent years and opportunities for international investment in airports such as Long Thanh, Van Don, Chu Lai and Lao Cai airport projects.

The on-off deal should be considered as extinct, but ADP remains involved as consultant

So, aside from the government’s equity divestment, which has turned into an equity investment, ACV seemingly still could sell a stake to Groupe ADP. As far as it is known the deal remains suspended rather than cancelled, although it is now difficult to envisage a scenario in which it might be resurrected.

What has happened is that ADP, through its subsidiary ADP Ingénierie, has chosen to involve itself with, and has been contracted to, conduct the feasibility study for Long Thanh International Airport, the second airport for Ho Chi Minh.

ADP has been active on other fronts. It also won a study on the expansion of Hanoi’s Noi Bai airport and implementation of the master plan for 2030 and 2050.

Long Thanh airport is long in the making; still, no one knows who should be financing it

Long Thanh is very much a continuing work-in-progress, one that dates back to 2013, and there have already been numerous consulting jobs on it. The airport is to be located 40km northeast of Tan Son Nhat Airport.

Intended to alleviate traffic congestion at Ho Chi Minh’s Tan Son Nhat Airport in the first phase, the airport was forecast to exceed its capacity of 25 million passengers per annum and 1.2 million tonnes of cargo per annum by 2020, but work hasn’t really got under way yet.

In the second phase, Airports Corporation of Vietnam would develop a second runway and expand the passenger terminal to raise capacity to 50 million passengers and 1.5 million tonnes of cargo per annum.

Then, in the final phase, the USD16 billion (total) project is designed to have a capacity for 100 million passengers and five million tonnes of cargo per annum by 2050.

The specifications keep changing. In May-2019 the Dong Nai Province's government adjusted the amount of landed need for phase one of Long Thanh International Airport's development from 1165 hectares to 1810 hectares. In total, approximately 5000 hectares of land will be required for the airport's construction, displacing more than 5000 local households. Of the approximately 15,000 people affected by the project, 70% are engaged in farming.

That seems to go against the grain of the renationalisation proposal for ACV, prompting the suspicion that ACV wants it both ways:  to attract domestic and international investment while retaining overall control over regulation and pricing. That will not be attractive to any investor.

That Ho Chi Minh needs another airport is not really in doubt. In particular, in the three years to 2017 (the most recent year for which statistics have been released) passenger numbers grew considerably (19.9%; 22.4%; 10.8%), while the capacity growth (seats) was less than half of that. 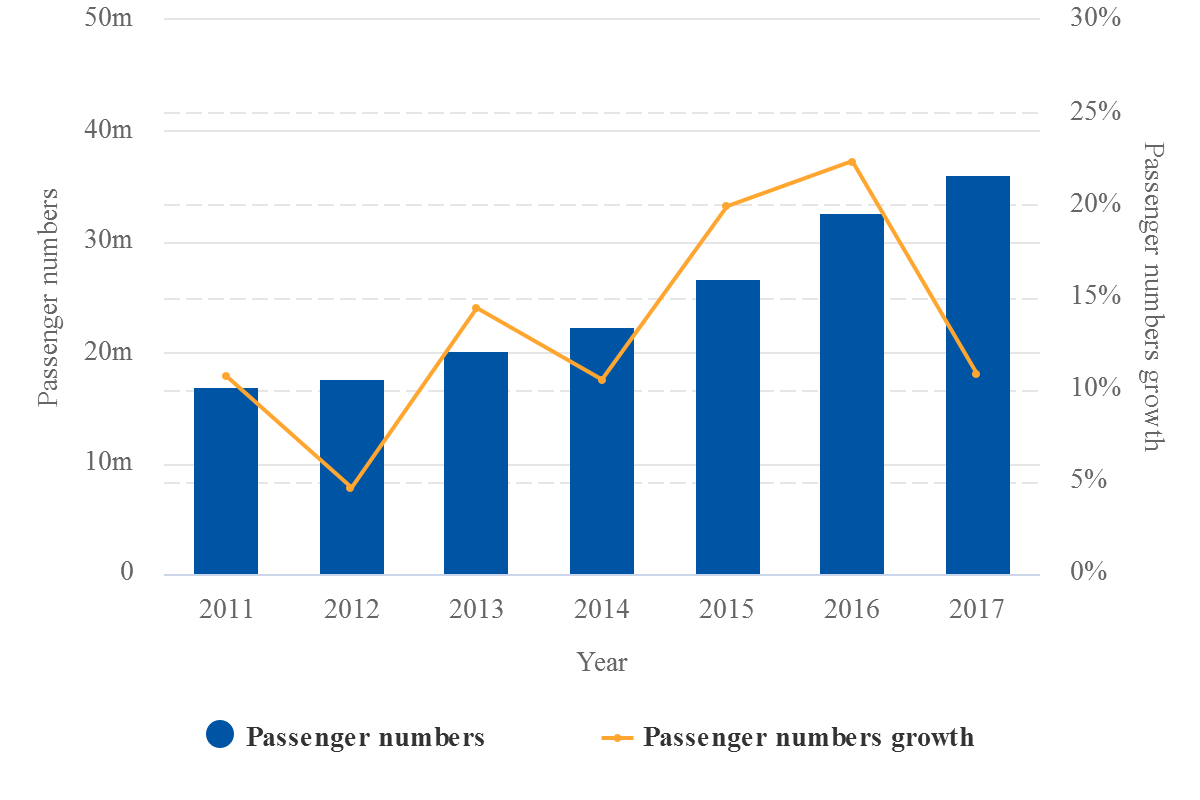 There have been IPOs, and at least one airline likes to operate terminals

There has been other financial activity at Vietnam’s airports.

Cam Ranh International Airport is the main airport serving the city of Nha Trang on the southern coast of Vietnam. In Jul-2017 the airport’s joint stock company held an IPO, listing it on the Hanoi Stock Exchange and issuing 1.4 million shares, equivalent to 24.17% of its total stake. The company received overwhelming interest in the IPO, with more than 244 registered investors ordering up to eight times more shares than what was offered. There were 63 investors that actually took part. The Hanoi Stock Exchange stated that the IPO had had the second highest number of respondents in 2017.

Elsewhere, airlines, such as the low cost Vietjet, have become involved in the financing and development of airports. The LCC has already been attracted to operating terminals at the Cam Ranh airport (above) and Phu Quoc International Airport.

Perhaps Vietjet was influenced by Bangkok Airways in nearby Thailand, which operated three airports itself.

So it would be wrong to say that there is no privatisation activity where airports are concerned in Vietnam. The other side of the coin is that what there is, is piecemeal and uncoordinated when it could have been quite different.

ACV had the opportunity to enter into a wide-ranging agreement with a highly experienced and respected operator that could have contributed to many of its projects, but which has been left, comparatively speaking, with the crumbs.

And this, while evidence of the benefits that such a (French) operator can bring is visible right next door in Cambodia, where Vinci has indirectly managed three airports for decades.

On top of that, this apparent renationalisation of ACV does not exactly put out the welcome mat to domestic or foreign entities.