Consolidation - and route reductions and higher fares - in the US market place are creating opportunities for the new breed of ultra low-cost carriers (ULCCs) led by Spirit Airlines, which set out on a path in 2006 to achieve unit costs among the lowest in the market. As Southwest’s costs are beginning to mirror those posted by legacy carriers, Spirit is leading the charge to capture traffic the soon-to-be three big full service network carriers no longer find attractive.

Capacity reductions that have resulted from both consolidation and a revamping of the airline business in North America have also created three distinct business models in the region – full service network carriers, hybrids and ultra low-cost airlines. Strong contenders have emerged in each category. The remaining carriers either need to carve out a new niche or adapt to the new maturity taking hold in the market place.

Based on the most recent data from the US Department of Transportation (DoT), once US Airways and American complete their merger the combined “new” American Airlines will account for roughly 21% of domestic airline traffic, followed by Southwest-AirTran at 18% (this is likely to be lower as Southwest dehubs Atlanta and finishes culling AirTran’s unprofitable routes) and Delta and United both at 16%.

The result is those carriers will represent approximately 71% of the US domestic traffic leaving Alaska, JetBlue, Spirit, Virgin America and, to some extent Allegiant (as well as regional airlines), to determine their respective shares of the remaining 29%. 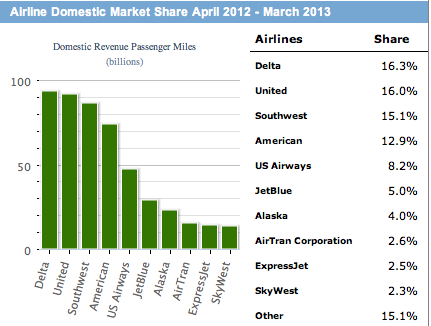 Spirit "comes in underneath", redirecting international aspirations to domestic routes

Recognising that consolidation will essentially result in fewer airlines presumably with an ability to improve pricing traction, Spirit Airlines has determined strong opportunities exist “to come in underneath, price more markets at a lower rate” to stimulate traffic that has been priced out due to higher fares, as CEO Ben Baldanza recently explained.

Spirit has been aggressively pursuing that strategy during the last three years in the US domestic space, growing in places such as Dallas/Fort Worth, Chicago, Houston and Las Vegas where the carrier sees an opportunity to stimulate low-yielding traffic that full service network carriers have abandoned. Dallas/Fort Worth – a market Spirit re-entered just two years ago – has risen to become its second largest base in terms of seats on offer as nearly 84% of its total seats are now dedicated to the US domestic market.

Beginning in 2010 Spirit turned its attention away from a marked expansion into the Caribbean and Latin America to focus on traffic stimulation in higher-fare US domestic markets. The attraction was too powerful to resist. 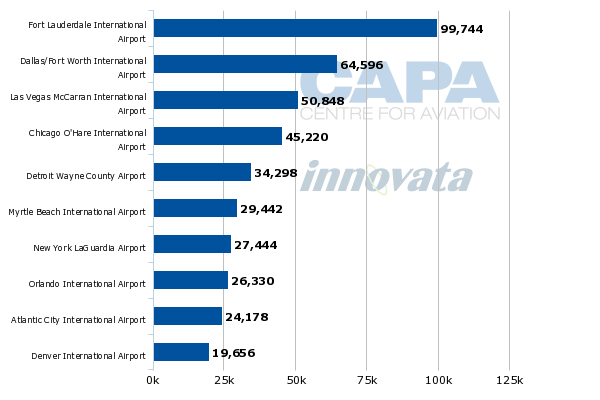 Spirit has calculated it now occupies a space held by Southwest in the 1980s, 1990s and early 2000s. “You see they don’t talk about their fares so much anymore because their fares are actually quite high,” said Mr Baldanza. He believes Southwest is essentially ceding the discretionary traveller niche, “and we don’t really see anybody else running to take that space and yet that’s the space we’re in”.

For the time being Spirit’s calculations appear to be paying off as its 1Q2013 top-line revenue grew nearly 23% to USD370 million and operating income jumped 33% to USD50 million. Its passenger traffic also grew 21% during that time. While Spirit did encounter some cost pressure in 2012, on a stage-length adjusted basis, its USD5.47 unit costs excluding fuel for the year were second only to Allegiant’s USD4.82 cents. The carrier aims to lower its ex-fuel unit costs by a further 1% year-on-year during 2013.

While both Spirit and Allegiant categorise themselves as ultra low-cost carriers, Allegiant’s business model is much different as it operates older MD80s with lower ownership costs on low-frequency service from small to mid-sized US cities to large leisure markets including Las Vegas, Orlando, Fort Lauderdale and Southern California. The company is looking next to introduce Airbus A319s into its fleet as the dash by carriers to order re-engined Airbus narrowbodies makes acquisition costs of existing models more attractive.

Allegiant Air route map as of May-2013 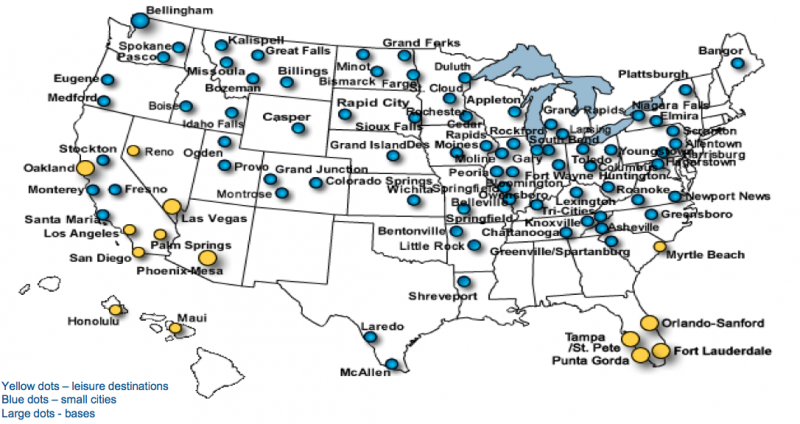 The model has been largely successful for Allegiant, but its decision to attempt to replicate the formula on service to Hawaii with larger-gauge 223-seat Boeing 757s has greater challenges and has not yet demonstrated it will work. Spirit is seasonally cutting service from Honolulu to Boise, Eugene, Phoenix, Spokane, Fresno, Stockton, and Santa Maria, and has not yet indicated the markets where service will resume.

Despite the challenges in Hawaii, Allegiant also turned a solid 1Q2013 performance, recording a nearly 15% increase in top-line revenues to USD273 million and a 44% rise in operating income to USD52 million.

The first quarter is one of Allegiant’s strongest as reflected in its 12% traffic growth and 13% rise in capacity. Some of the traffic increase is attributable to Allegiant entering 10 markets shed by AirTran as Southwest has been integrating the two networks. Some of those markets included Asheville, North Carolina; Newport News, Virginia; Bloomington, Indiana; and Moline, Illinois.

Allegiant reasons that its cost structure versus more traditional carriers allows it to “light up small cities” to access numerous leisure destinations, carrier CFO Scott Sheldon recently stated. He concluded it is not out of the question for Allegiant to introduce eight to 10 markets a year.

Both Spirit and Allegiant have somewhat shrewdly targeted passengers that legacy carriers no longer care about, leveraging a cost base that allows them to charge lower fares while for the moment remaining profitable. But non-ticket revenue is a meaningful strategy for both companies.

Spirit’s bare-bones, unbundled approach is based on its belief that passengers should only pay for what they really want or need during travel. It was the first carrier to charge for checked baggage and has further unbundled the product during the last five years, charging for carry-on luggage, printed boarding passes at the airport and for water and soft drinks. Spirit’s numerous non-ticket revenue elements also include up-sells to its “big front seat”, a co-branded credit card, subscriptions to its USD9 fare club and its Spirit Vacations business.

The carrier estimates that between 2007 and 1Q2013 its non-ticket unit revenue per passenger segment grew from USD10 to USD54.75, recently chief marketing officer Barry Biffle remarked that Spirit’s near-term goal was to achieve USD60 in non-ticket revenue. 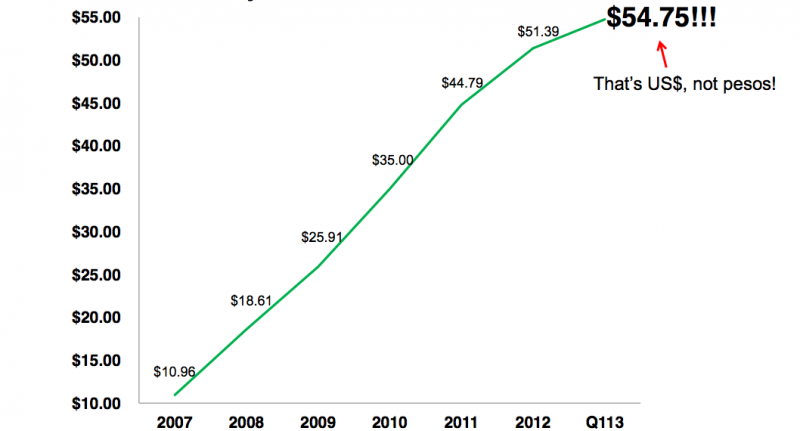 Mr Biffle admitted reaching that point would be more difficult as “we’ve done a lot of easy things”. However, he believes Spirit is improving in revenue managing its current slate of non-ticket revenue offerings, noting during the last year the carrier introduced advance purchase for bags. Baggage fees are cheaper for passengers opting to pay online at the time of booking rather than at the airport. The topic of revenue managing ancillaries is surfacing more in discourse as the big ticket items – baggage, change fees, extra legroom, expedited security and buy-on-board food – have largely been exhausted by full-service hybrids and low-cost carriers alike.

Allegiant's unique niche and cleverly crafted website allow it to exploit two aspects of the leisure break, the air and the ground. It starts with a default of "2" persons rather than the one traveller in most airline booking pages and it is hard to purchase a ticket without being accosted - in the nicest way - by a host of attractive hotel offers for the period of the visit before moving on to pay for the ticket.

The carrier thus breaks its ancillary revenue down by air related revenues (baggage fees, etc.) and third party products that include bundled vacations, as well as hotel and car rentals. Similar to Spirit, the carrier has been making strides in each area during the last four years, growing ancillary revenue per passenger from USD29 in 2009 to nearly USD42 during 1Q2013.

Allegiant's Mr Sheldon believes the carrier still has a “lot of runway” in its third party line of business, noting it has a captive consumer for enriched hotel and car rental offerings. During 2H2013 Allegiant plans to introduce a co-branded credit card (a strategy used by both hybrids and full-service carriers) and a loyalty programme. The latter is an interesting move given a lot of Allegiant’s customers fall into the infrequent leisure traveller category, but obviously the carrier has determined there is enough scale to launch a frequent flyer scheme. It will be interesting to watch the programme’s structure unfold at Allegiant, and if the carrier opts to adopt the popular trend of basing rewards on money spent rather than miles accumulated.

Spirit and Allegiant’s aggressive product unbundling coupled with their foresight to target niche customer spaces that are largely untouched by competitors has resulted in both carriers recording some of the best financial results among all US carriers. While there might be some stumbles along the way in miscalculating ways to replicate those strategies (Allegiant’s next test will come in Mexico), the business plans appear solid as long as the ever-looming macroeconomic uncertainty does not spook discretionary spend among US leisure travellers.

Provided the appetite for travel remains strong among that passenger base, Spirit and Allegiant should continue to produce favourable margins. Based on calculations from Allegiant, the pre-tax margins produced by Spirit and Allegiant during 1Q2013 were triple that of Southwest – the carrier which has ceded the lower-yielding market to the two ultra low-cost carriers. As Spirit and Allegiant enjoy their evolving strength in that market place, Southwest is still trying to determine its place in the new world order of a mature US market. 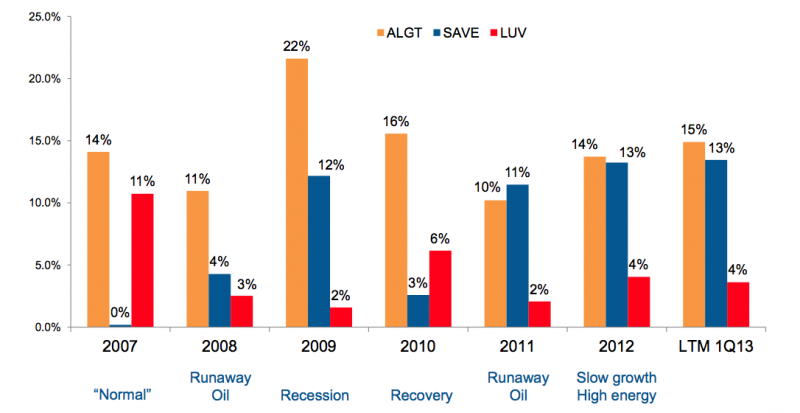 Note: This is the first report in a two part series examining the ultra low-cost carrier and hybrid business models in the US market place