Spirit Airlines’ rapid growth during the last couple of years has not compromised the carrier’s profitability. During a time when it is not uncommon for the carrier to introduce 20 new route pairs during a half-year period, Spirit has maintained and grown its profits while undergoing a fundamental shift in its business.

As it continues to turn its attention to the US domestic market, Spirit seems unfazed by JetBlue’s moves into some of Spirit’s Latin American markets, as JetBlue by YE2013 will compete with Spirit on all its markets from Fort Lauderdale to Latin America. But Spirit’s US domestic growth remains unabated, and will account for the bulk of the roughly 22% capacity increase Spirit plans during 2013.

Spirit also declares that it has one of the most enviable cash positions in the industry, which at YE2012 was nearly 32% of the last trailing 12 months revenue. But the carrier’s relatively young status in some ways diminishes the prospect of cash dispersion or other shareholder reward, as Spirit continues work to prove its business model has staying power.

It will be interesting to see how long it is before other airlines feel the need to head off Spirit's growth.

US domestic growth continues from Dallas/Fort Worth and Houston

Spirit between Jan-2013 and Jun-2013 will introduce roughly 18 new routes, with nearly half of the new pairings originating in Dallas/Forth Worth (DFW). In just two short years DFW has risen to become the carrier’s second largest base in terms of seats deployed. 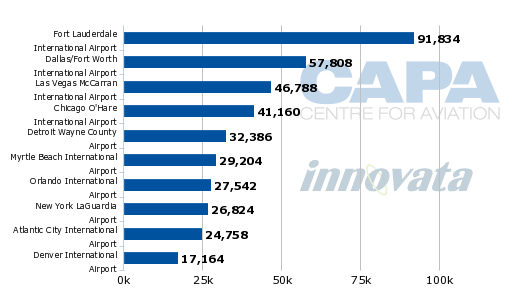 Other markets where Spirit has significantly built a presence include Las Vegas, Chicago O’Hare and most recently Houston. The growth outside of its base and headquarters of Fort Lauderdale is consistent with Spirit’s calculus that there are numerous markets where it can stimulate traffic with its low base fares and co-exist peacefully with US network carriers, which are trying to shun the lower-yielding passengers Spirit targets.

Spirit’s tactics for the moment are continuing to pay off as the airline’s profits grew 30% year-over-year during 1Q2013 to USD31 million on a nearly 21% increase in capacity. Top-line revenues grew 23% to USD370 million, and outpaced the 21% rise in expenses to USD320 million.

That helped drive 33% growth in operating income to USD50 million. Since Spirit launched its protracted US domestic expansion in the 2010 time frame its profits increased 54% from 2010 to 2012 on a corresponding capacity increase of nearly 40%. 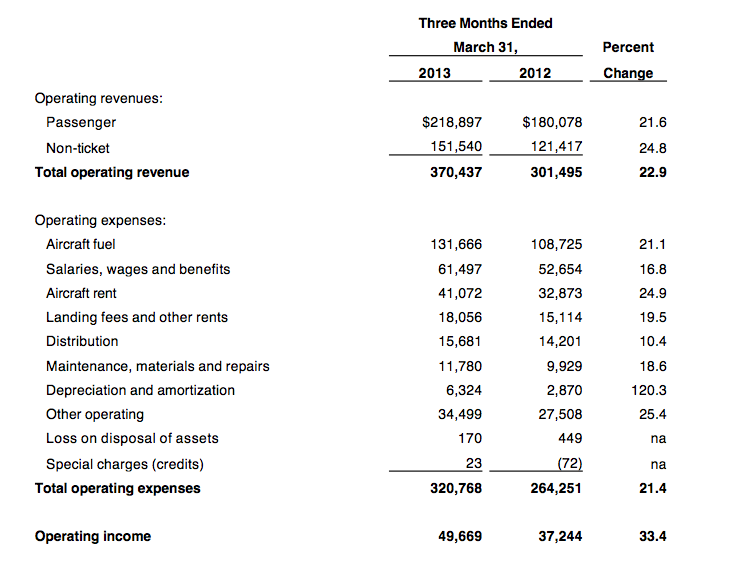 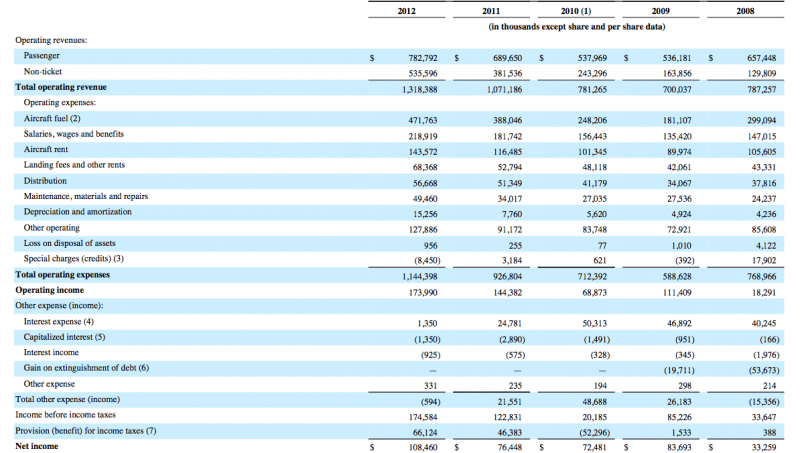 Carrier chief marketing officer Barry Biffle recently remarked to analysts and investors that roughly 20%-25% of Spirit’s capacity at any given time is deployed to new markets, which would appear to suggest that the time to maturity for those routes is short.

The airline has previously remarked that if a new market does not perform well its lower frequency pattern allows it to quickly deploy aircraft elsewhere.

While Spirit has opted for pursuits outside of Fort Lauderdale, JetBlue believes opportunities exist to mine the South Florida airport, especially on services to Central and South America and the Caribbean. JetBlue continues its expansion southward from Fort Lauderdale in Nov-2013 when it introduces service from Peru. Spirit and JetBlue presently compete on international routes from Fort Lauderdale to Bogota, Colombia; Cancun, Mexico; Santo Domingo, Dominican Republic; Kingston, Jamaica; and its focus city of San Juan, Puerto Rico.

This applies even as JetBlue has slightly surpassed Spirit as Fort Lauderdale’s largest carrier in terms of seats on offer, with JetBlue holding a 21% share (for the week of 25-Apr-2013 to 5-May-2013) compared to 19% for Spirit. But Spirit holds a lead over JetBlue in terms of international capacity deployment from Fort Lauderdale, as its 35% share its 9ppts higher than JetBlue’s 19%.

Mr Biffle noted that American is already a high-cost airline serving the South Florida market, which is also served by Spirit, which Biffle described as a high quality, low-cost, low-fare airline. “So they’re [JetBlue] kind of the third one to the party.” He reiterated that growth in the US domestic market is generating better margins, which in turn is allowing for improvements on return on invested capital (ROIC). Consolidation among US majors has helped in that regard as their focus on more higher-margin passengers has created opportunities for the new breed of ultra low-cost carriers (ULCC) and wannabe-ULCCs to capitalise on the low hanging fruit in the US domestic space.

While ROIC has been an important benchmark for Alaska Air Group for many years, it has only recently risen to a higher level of importance for most carriers. The result is several different methods are emerging to calculate on ROIC. 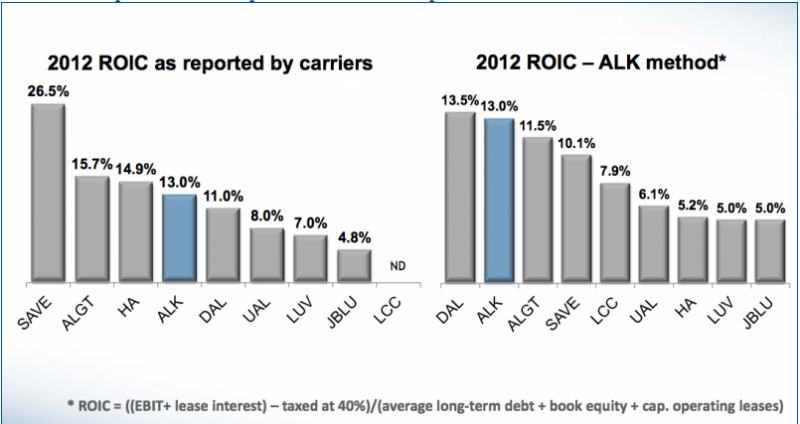 Spirit is conserving cash as it remains in high growth mode

Spirit is conserving cash as it remains in high growth mode

Carrier CFO Ted Christie explained that as a high growth company Spirit needs to maintain a higher cash balance in lieu of returning it to shareholders in the form of a dividend or a share buyback. He explained Spirit has financing in place with respect to its aircraft deliveries through YE2013 with operating leases.

The carrier has a steady stream of Airbus narrowbodies between the end of 2013 and 2015, when it plans to grow its fleet from 54 to 71.

Presently Spirit appears to be hitting those targets even as it adds new routes rapidly and has double-digit capacity expansion. Underlying the rapid growth is the carrier's still relatively low penetration in the US market place.

How long before other airlines feel constrained to respond to Spirit's growth?

The carrier is not even ranked in the top 10 US carriers in terms of revenue passenger miles from Feb-2012 to Jan-2013. Coupled with the low hanging fruit produced from US consolidation, Spirit could continue to be a first mover in the new ultra low-cost sector.

With all of the other US airlines looking over their shoulders at the potential impact of the ULCCs, it will be interesting to see how long it is before they feel the need to cap Spirit's growth – or whether they will be able to. JetBlue CEO Dave Barger argues that his airline's product quality and lower cost operation allows it to compete effectively head-to-head with Spirit. But the same cannot be said of many others.