JetBlue plans to introduce its first destination south of the equator in Nov-2013 with new daily service from Fort Lauderdale in South Florida to Lima in Peru. The move is consistent with the carrier’s plan to use Fort Lauderdale as a springboard into Latin America as JetBlue indicates more international service from the airport is in the pipeline.

JetBlue is also seizing a prime opportunity to introduce low-cost competition in market where the only LCC presence is a single weekly flight operated by Spirit Airlines. Other carriers operating in the South Florida-Lima market are oneworld partners American Airlines and LAN and Star Alliance member TACA Peru.

Services JetBlue has launched from Fort Lauderdale to Latin America appear to have a short maturation time, which results in the carrier looking to harvest more of those opportunities to balance out new market introductions that take longer to mature. JetBlue has identified about 20 potential new markets in Central America, South America and the Caribbean that are viable from Fort Lauderdale. 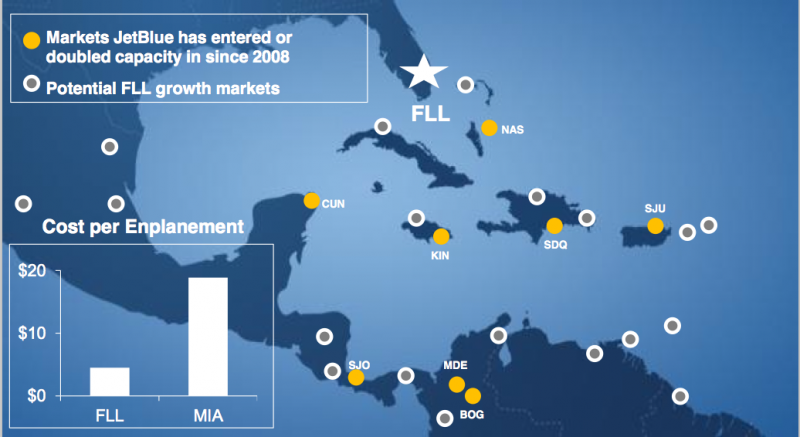 Based on data from the Pew Research Hispanic centre, roughly 4.4 million Hispanics reside in Florida, and many are concentrated in South Florida, creating an attractive air travel market into Central and South America and the Caribbean. Outlining South Florida’s attractiveness, JetBlue chief commercial officer Robin Hayes remarked the region has “a lot of communities from many countries all over the Caribbean and South America that travel frequently. There is a lot of business travel. It’s a very rich demographic for us.”

JetBlue is also benefitting from a strategy shift in Fort Lauderdale by Spirit Airlines, who during the last two to three years has turned its attention away from building out international service from Fort Lauderdale to launching domestic routes outside Florida.

Spirit has mainly been targeting routes connecting large US cities, hoping to net lower-yielding passengers that US majors have abandoned. Spirit is based in Fort Lauderdale, but based on current schedules in Innovata (29-Apr-2013 to 5-May-2013) JetBlue has eclipsed Spirit as the leading carrier from the airport in terms of total seat share. 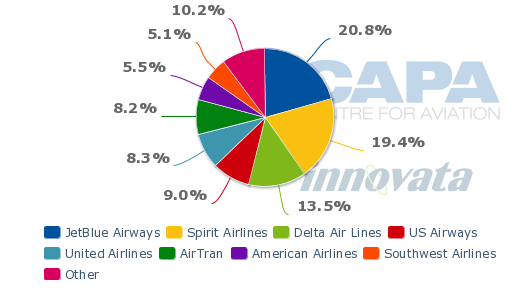 In the international market from Fort Lauderdale, Spirit is still significantly larger than JetBlue. Spirit currently serves about 25 destinations in Latin America and the Caribbean from Fort Lauderdale (although most routes are served with limited frequencies as is the case with Lima). 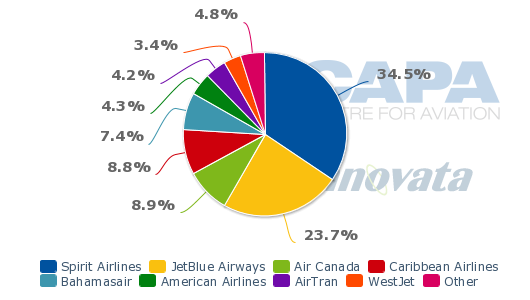 Of the 15 domestic destinations in the mainland US that JetBlue currently serves from Fort Lauderdale, five are in the New York City area and 14 are in the northeast. Pew research shows New York is home to 3.5 million Hispanics.

Mr Hayes remarked that presently JetBlue operates roughly 50-plus daily flights from Fort Lauderdale, which could possibly grow to 100. However, he offered the caveat that doubling daily flights would require investment in airport infrastructure.

Joining Mr Hayes to tout Fort Lauderdale’s growing importance in JetBlue’s international expansion strategy, JetBlue VP of network planning Scott Laurence explained that the airline was profitable during the first month of operations from Fort Lauderdale to Bogota. “It is one of our top markets,” he stated, adding that the carrier has the same expectations for Medellin’s performance.

Lima offers some similar market characteristics from South Florida to Bogota and Medellin. American, LAN and Avianca all operate between Miami and Bogota while American and Avianca offer service from Miami to Medellin. From Fort Lauderdale, JetBlue competes with Spirit on service to Bogota and will also break Spirit’s monopoly status on service from Fort Lauderdale to Medellin and Lima.

A potential key to JetBlue’s success in Fort Lauderdale-Bogota, which it expects will carry over into Fort Lauderdale-Medellin and Fort Lauderdale-Lima, is a product offering that is more attractive than Spirit’s no frills model. JetBlue's combination of complimentary snacks and one free checked bag are likely worth a higher fare than those advertised by Spirit (who charges for everything beyond a seat, including overhead bin space and water), but lower than fares charged by legacy carriers.

JetBlue stands to achieve success in new service to Lima

JetBlue’s prospects between Fort Lauderdale and Lima are perhaps even more promising given Spirit’s miniscule presence in the market.

Data from Peru’s DGAC show that Miami was the third largest international market served from Lima in Jan-2013 and Feb-2013 based on origin and destination travellers combined, representing roughly 9% of the total combined 1.2 million international passengers at Lima during those two months. The top markets were the large South American cities of Santiago and Buenos Aires.

Presently three full-service carriers, American, LAN and TACA, serve the Miami-Lima route. This creates an opportunity for JetBlue to target both leisure and visiting friends and relatives (VFR) traffic from South Florida with its lower fares, and perhaps an easier US customs processing experience.

Mr Laurence remarked that Fort Lauderdale is not only a cheaper airport, but also a better point of entry into the US. “We don’t want our customers to have a Miami-like experience where they’re in a customs line for 90 minutes,” he stated.

JetBlue’s apparent effectiveness in competing with Spirit from Fort Lauderdale to Colombia should be easily replicated in Lima. Peruvian DGAC data show that for the first two months of 2013 Spirit transported just 1,983 passengers between Fort Lauderdale and Lima, which was less than 0.2% of the total 1.2 million international passengers travelling to and from Peru through the first two months of the year.

In 2012 Spirit transported only 26,724 passengers to and from Peru, according to Peruvian DGAC data. This gave Spirit a 0.4% share of Peru’s international market. As Spirit has been the only low-cost carrier serving Peru since Gol dropped service to Lima in 2009, the LCC penetration rate in the Peruvian international market was only 0.4% in 2012. Peru also does not have a local LCC, although it is a potential market for a third franchise from Irelandia-backed LCC group Viva.

Pew’s examination of data collected from the 2010 American Community Survey shows that Florida is home to 17% of individuals of Peruvian descent living in the US, which provides a bit more incentive for JetBlue to usher in low fares on a larger scale in the South Florida-Lima market.

It should also be easy to challenge the status quo carriers in the Lima market. Peruvian DGAC data indicate that LAN (including LAN Peru and other LAN affiliates) represented 46% of the 1.2 million international passengers travelling to and from Peru in Jan and Feb-2013. While LAN parent LATAM Airlines Group has indicated that it intends to leverage more north-south connection opportunities through Lima, JetBlue is mostly operating an origin and destination service, which means the carrier should be able to co-exist with the larger airlines in the South Florida-Lima market.

LATAM rival Avianca-TACA is also building up Lima as a north-south hub, focusing on connections throughout Latin America. The group's subsidiaries, including TACA Peru, accounted for 23% of international passenger traffic to and from Peru in the first two months of 2013.

TACA Peru currently only operates one daily flight on the Lima-Miami route using A320s. But the carrier is expected to up-gauge this flight at some point to A330s, which it began operating at the end of 2012.

See related report: TACA continues expansion in Peru with A330s ahead of rebranding as Avianca

TACA currently accounts for only 13% of seat capacity between Lima and Miami, compared to 35% for American and 52% for LAN, according to CAPA and Innovata data. 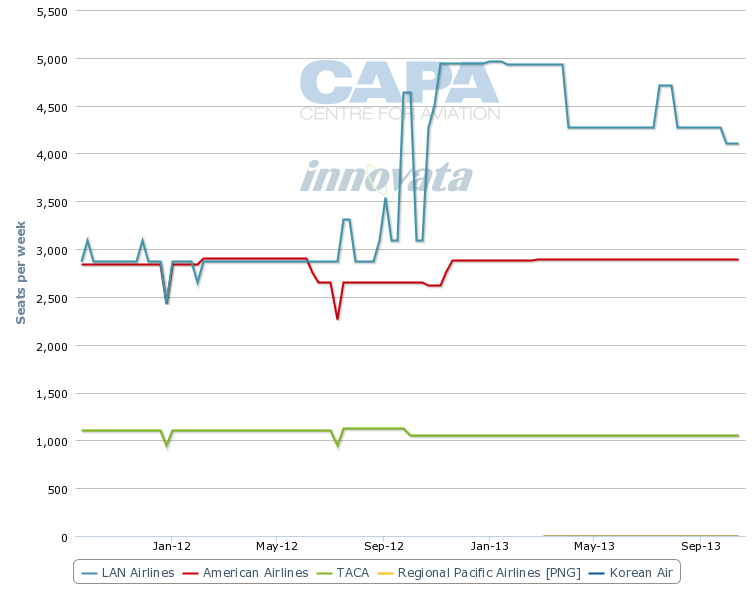 JetBlue has managed to turn a positive performance from Fort Lauderdale-Colombia even as it competes with Colombian flag carrier Avianca on Fort Lauderdale-Bogota service. Avianca also operates from Miami to Bogota.

JetBlue’s planned Airbus A320-operated service to Lima falls into the carrier’s often-stated strategy to penetrate deeper into South America. The Colombian markets have served as a good test case to prove JetBlue’s calculation that service from South Florida to South America spools to profitability quickly. All the pieces appear to be in place for the carrier to replicate its Colombian success in Peru and possibly beyond.