Despite some backlash from consumers of its no-frills business model that entails selling all add-on items in the travel experience, Spirit Airlines has recorded a strong financial performance since its transition to an ultra low-cost carrier in 2007. The cost base it maintains by skewing customer behaviour in the purchasing cycle allows it to exploit a passenger base the legacy carriers and Southwest Airlines have abandoned, allowing Spirit to operate under the radar of the larger carriers who are squarely focused on expanding their share of high-yielding corporate customers.

The airline concludes that the shifting dynamics of the US market place and its relative low 2% penetration of that space support capacity growth of nearly 22% during 2013.

Recently, analysts at Raymond James recorded that US legacy carriers and Southwest Airlines have exhibited capacity constraint for roughly three years, concluding they would not sell seats which did not cover the cost of fuel, the largest expense for any airline. The company estimates that Southwest’s fares have risen approximately 25% during that time.

Spirit makes no apologies for its business model that essentially offers a base price for travelling between two destinations with all other aspects of travel for sale including checked and carry-on luggage, water, food and even printed boarding passes. 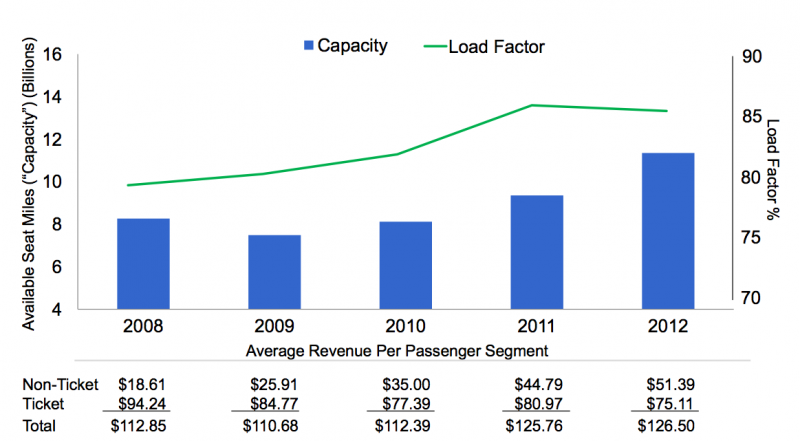 Carrier CFO Ted Christie recently outlined the rationale behind Spirit’s business model to investors, noting that the airline prices its products to influence customer behaviour as a means to lower costs. At times the sole purpose for the introduction of an unbundled product is to lower costs, Mr Christie explained.

He cited the example of feed for checked and carry on bags that result in passengers checking fewer bags, which pulls weight off the aircraft and lowers fuel burn. By charging for printed boarding passes, Spirit cuts down on the resources needed at the airport to process passengers. 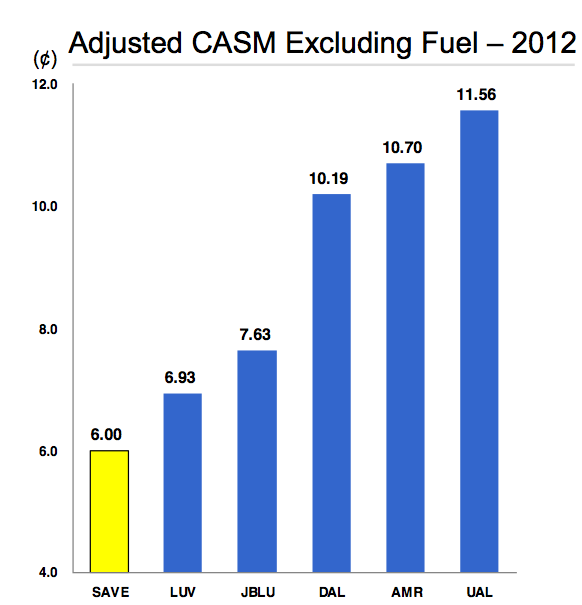 Even as stories in the consumer press frequently surface about passengers frustrated by what they perceive as nickel and diming by Spirit, the carrier’s traffic has jumped 45% since 2010, and Mr Christie touted the fact that Spirit has been consistently profitable since the ultra low-cost transition in 2007. From 2008 to 2012 Spirit’s net income rose more than 200% to USD108 million. During the last couple of years Spirit shifted its network strategy from serving populated markets in the US north east through Florida and into the Caribbean and Latin America to a push into the central and western regions of the US.

Mr Christie noted that Spirit believes there are numerous markets in the US that could be exploited at Spirit’s price points. The carrier has entered legacy stronghold markets with the largest push occurring from Dallas/Fort Worth, which is now Spirit’s second largest base in terms of seats on offer. Other legacy fortresses where Spirit has made a push include Denver, Detroit, Houston, Minneapolis and Philadelphia. 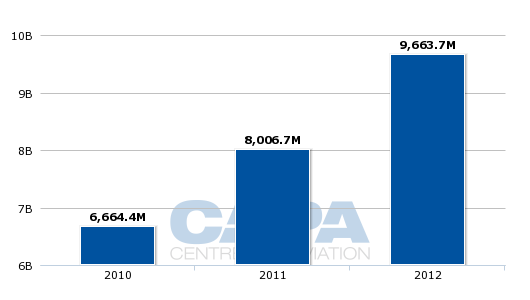 Spirit enters those markets with one to two flights per day, which the carrier reasons is just enough to stimulate the low-yielding passengers now abandoned by legacy carriers. Spirit’s ultra low-cost structure gives the carrier an ability to target those passengers through lower fares and still attain profitability. Aside from some pricing action from Delta in targeted markets, the legacy carriers have left Spirit alone as it works to capture more budget conscious travellers in large metropolitan markets.

Putting Spirit’s planned 21.5% capacity growth for 2013 into context, Mr Christie stated that overall the carrier only accounts for about 1.5% to 2% of the US domestic market. Moreover, some of the capacity growth is stemming from larger-gauge Airbus A320 narrowbodies, which are configured with 174 seats compared with 145 seats on its Airbus A319s.

Of the nine aircraft Spirit is taking delivery of in 2013, seven are the larger-configuration A320s and the remaining two jets are A319s. 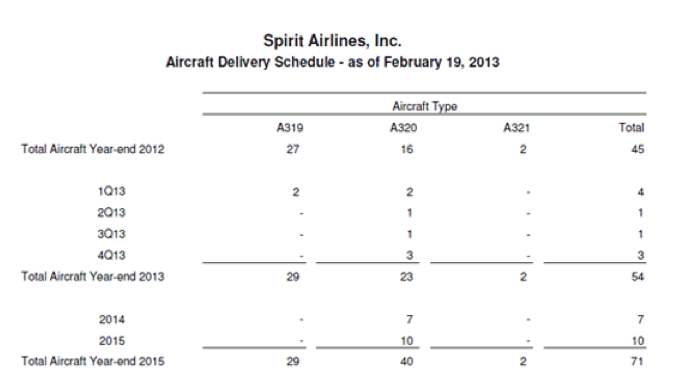 The network growth driving the capacity increase is from adding new connections from existing markets Spirit has added during the last few years. Mr Christie stated that will allow Spirit to fully utilise its airport assets.

Mr Christie also noted that there are more than 400 markets Spirit does not serve today that meet its market criteria – more than 200 passengers per day each way, high average fares and a price level Spirit can achieve that allows it to stimulate enough demand to record a 14% margin or higher. He stated it would take more than 140 aircraft to serve those untapped markets, which is more than Spirit has on order for delivery through the current decade. Spirit believes there are enough markets where it can execute its strategy to support annual capacity growth of 18% to 22% through 2015.

Spirit is obviously presenting a positive scenario about its growth prospects to assure investors its business plan is viable for the long term. While its ultra low-cost focus appears to be robust enough to withstand macroeconomic uncertainty, its calculus has not always proven to be accurate. Some new markets that have been cut include Dallas-Fort Worth-Boston, Chicago-Los Angeles and Phoenix-Mesa-Los Angeles.

As the performance in some markets fails to meet internal targets, Spirit assures that it has no emotional attachment to markets and attaches no value to attaining a certain level of market share. With one or two flights a day representing a low service footprint in those markets, Spirit reasons its can cut its losses quickly in underperforming markets and easily redeploy assets elsewhere.

Product unbundling is a huge pillar in Spirit’s ability to offer the lowest fares amongst US carriers. But as the ancillary wave in the airline industry potentially reaches its crest, questions are arising as to how ancillary revenue can evolve. Mr Christie remarked that the airline business has done a good job at managing ticket price revenue with respect to charging the appropriate fare based on desired travel date or other customer desires. But carriers generally don’t apply the same reasoning to managing ancillary revenue streams.

He cites the example of charging the same bag fee for travel on 23-Sep versus 23-Dec, “which doesn’t make a heck of a lot of sense”, said Mr Christie. In September there could be as little as two bags in an aircraft belly while on 23-Dec an airline leaves bags on the ground. “We have a supply-demand problem,” Mr Christie declared. “So we believe there are opportunities...to price that product that will drive incremental revenue.”

As ancillaries have proven to be a steady source of revenue that is more inelastic than pure ticket revenues, the number of elements that are eligible for unbundling is becoming limited.

Spirit Airlines has crafted and exploited a new and somewhat unique low-fare, low-cost base in the US that has emerged in the country due to legacy carrier consolidations. Its cost base so far has allowed the airline to profitably benefit from carrying passengers that network carriers no longer find lucrative. Spirit’s calculations show that its growth opportunities are somewhat boundless.

Even if the carrier’s prospects might not be as robust as it estimates, Spirit’s financial performance for the moment appears to support its ambitious capacity growth. As an ultra low-cost operator it is apparently in a niche which is currently nicely vacant. 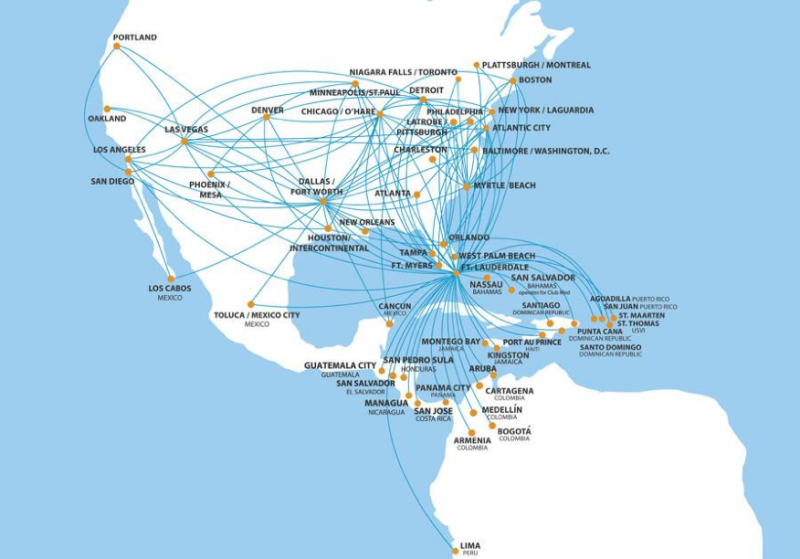