Executives at Spirit Airlines believe the airline’s favourable financial performance during 4Q2012 and full year 2012 demonstrates the soundness of the carrier’s business model built on offering a comparatively lower base fare and garnering a large portion of ancillary revenue from various add-on products. At the moment the carrier holds a solid outlook for 2013, reflected by its planned supply expansion of roughly 22%. The carrier continues to move into legacy and low-cost stronghold markets in the continental US as part of its larger strategy to diversify from the lower-yielding south Florida market. Beginning in Feb-2013 and continuing over the year Spirit is introducing additional flights from Baltimore, Detroit, Denver, Houston, Minneapolis and Philadelphia.

A USD25 million hit to its revenue, resulting from operational disruptions from “superstorm” Sandy that struck the US east coast in Oct-2012, triggered an 18% drop in Spirit’s 4Q2012 profits year-over-year to USD20 million. Spirit has a large presence in Atlantic City, New Jersey, which chief marketing officer Barry Biffle stated was the epicentre of the storm. Spirit is the only carrier serving the airport, and presently (18-Feb-2013 to 24-Feb-2013) operates flights to Fort Lauderdale, Fort Myers, West Palm Beach, Orlando and Tampa, Florida and to Myrtle Beach, South Carolina.

Spirit CEO Ben Baldanza explained to analysts during a 19-Feb-2013 earnings discussion that Spirit cancelled 136 flights as a result of the storm. In addition to dampening demand for travel to New York and Atlantic City (Sprit serves Chicago O’Hare, Fort Lauderdale, Dallas/Fort Worth, Detroit and Myrtle Beach from LaGuardia) in the storm’s wake, Spirit Mr Baldanza explained the effects spread beyond direct flights to those regions because New York and Atlantic City are large flow markets to Spirit’s largest base Fort Lauderdale, which serves as the company’s headquarters and gateway to the Caribbean and Latin America.

Despite the negative effects from storm Sandy, Spirit grew its 4Q2012 top-line revenues by nearly 20% year-over-year to USD328 million and full year revenues 23% to USD1.3 billion. Its full year 2012 profits increased by 42% to USD108 million.

Spirit’s previous warnings of a drop in unit revenues during 4Q2012 of 7% to 8% materialised as unit revenues fell 6.6% year-over-year as the fallout from Sandy dampened demand. Unit revenues for full year 2012 only increased by 1.5%. 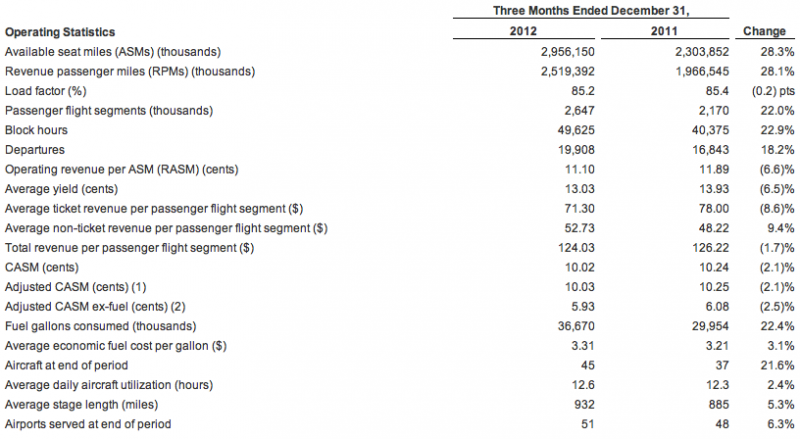 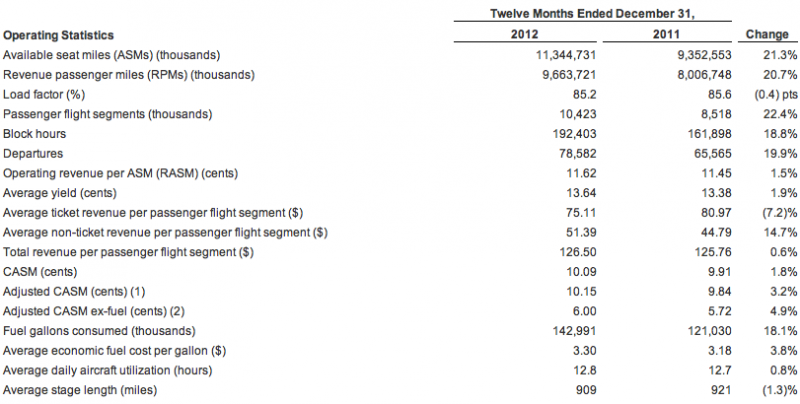 Spirit is one of the most extreme carriers with respect to product unbundling, charging for extra carry-on bags, checked bags, water and snacks and even a fee for printing boarding passes at the airport. The carrier reasons its bare bones approach allows a customer segment normally priced out of air travel affordability, and gives passengers the option to only purchase items they wish to use.

While the approach has triggered highly publicised consumer backlash, Spirit recorded strong margins of nearly 10% for 4Q2012 and 12.6% for the full year 2012.

Mr Baldanza explained Spirit’s customers have the ability to choose only the add-ons they find valuable, and if those passengers are not interested in certain items, “they don’t pay subsidies to somebody else’s choice”. He concludes that Spirit’s solid results, including load factors that were 85% for the full year 2012, show “there is an ever increasing acceptance and awareness of the business model”.

Even as Fort Lauderdale represents Spirit’s largest base in terms of seats on offer, the carrier has had little expansion from South Florida during the last three years, opting to introduce service into legacy-dominated markets including Chicago, Dallas/Fort Worth, Denver and Houston.

Spirit re-launched service from Dallas in 2011 and also introduced flights from Chicago O’Hare that same year. Since that time those two airports have become the carrier’s second and third largest bases, respectively, in terms of seats on offer. The airline offers nonstop service to 16 markets from Dallas and flights to 12 markets from Chicago. 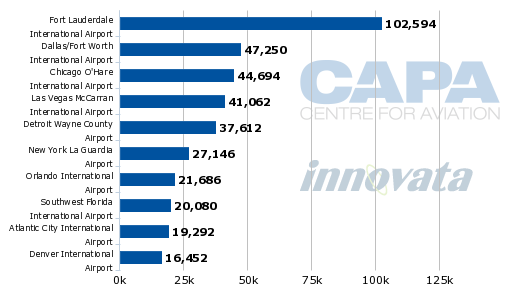 Spirit's push from Dallas is continuing in 2013 as new service to Delta’s hub in Minneapolis and US Airways’ hub in Philadelphia begins on 04-Apr-2013.

Those markets are typical of Spirit’s new route footprint during the last couple of years – major markets from a legacy carrier’s hub where the carrier determines it can stimulate a certain level of traffic that has been abandoned by legacy airlines with an average of one or two flights per day. Delta in 2012 experimented with matching some of Spirit’s fares in Florida markets; but the major carriers have largely left Spirit alone as it has rapidly expanded into mainstream routes.

Schedules in Innovata show that around the time Spirit launches the flights to Minneapolis a total of roughly 8,547 one-way weekly seats will be available with American holding a majority share, followed by Sun Country with 13% of the seats, 12% for Spirit and Delta with a 9% share.
During that same time period approximately 11,560 seats will be on offer between Dallas and Philadelphia with American holding a 50% share, US Airways accounting for a 42% and Spirit representing 8% of the seats.

Available seat capacity from Dallas/Fort Worth to Minneapolis and Philadelphia: 14-Apr-2012 to 20-Apr-2013

Spirit’s expansion from Dallas continues on 25-Apr-2013 when the carrier introduces service to three additional new markets – Los Angeles, Oakland and Cancun – followed by new flights in Jun-2013 to Los Cabos, Mexico and Latrobe, Pennsylvania, which is located 64km from Pittsburgh.

Spirit appears unfazed that Dallas-Los Angeles is already a well-served market, with roughly 28,200 seats on offer once it launches flights in the market. Spirit will hold just a 4% share of the seats once its service begins, similar to the 4% stake held by United. American is the market leader with an 81% seat share and Virgin America accounts for 10% of the seat share. 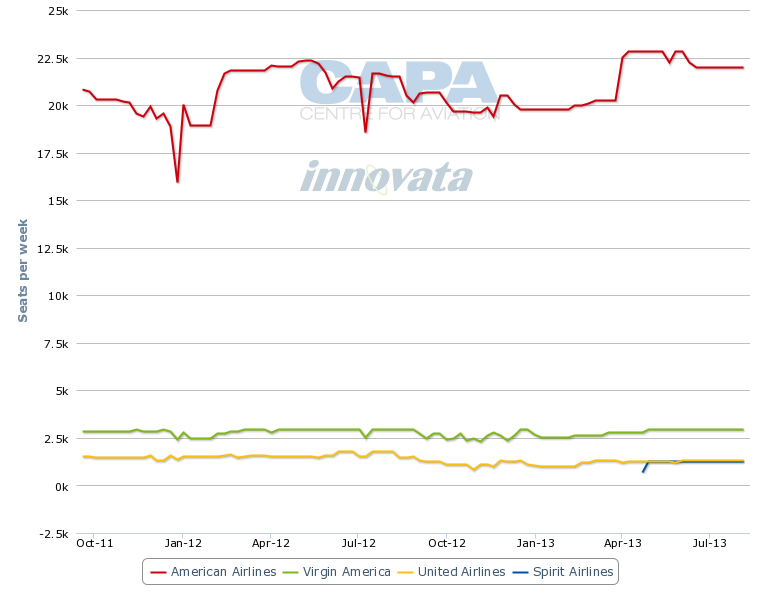 Spirit faces the same competition in the Oakland market. While it will become the only carrier operating service from Dallas to Oakland in Apr-2013, American, United and Virgin America serve San Francisco, which is located 18km from Oakland. Schedules for 28-Apr-2013 to 04-Mar-2013 show that roughly 16,900 seats will be available between Dallas and San Francisco, with American accounting for a 76% share, United representing 9% of the seats and Virgin America holding a 15% share.

Spirit is also launching service from Dallas to the leisure destinations of Cancun on 25-April-2013 and Los Cabos on 13-Jun-2013. Spirit around the time it launches Cancun will represent roughly 15% of the approximately 8,128 seats on offer from Dallas, with Sun Country accounting for a 10% stake and American representing a 75% share. During Jun-2013 when its new flights begin in the Dallas-Los Cabos market, Spirit will account for about 18% of the roughly 3,581 seats on offer and American will represent the majority 86% share.

During mid-2012 Spirit inaugurated its first international market outside of Fort Lauderdale with the launch of Dallas-Toluca (72km from Mexico City) as part of an effort to replicate its strategy of targeting visiting friends and relatives (VFR) traffic from Fort Lauderdale to the Caribbean and Latin America to VFR passengers in the US southwest to Mexico. The carrier also operates flights from San Diego to Los Cabos. Outside of the US southwest and its Fort Lauderdale base Spirit also operates service from Detroit to Cancun.

Even as Spirit seeks to offer dramatically lower fares than its competitors, part of the calculus in making a push from Dallas during the last couple of years is the more favourable returns produced by its service from Dallas versus Fort Lauderdale. Mr Biffle explained the strong energy industry results in a robust economy for the state of Texas. The more robust incomes of the state’s residents result in stronger demand and yields, he explained. “So when you think strategically about where you are deploying your assets, it is not a coincidence that we are going after the better parts of the economy rather than chasing some of the more average like South Florida,” Mr Biffle stated.

Spirit continues to spread its wings in Denver and Houston

Spirit is also entering other mainstream legacy markets during 2013 with the Feb-2013 launch of service from Denver to Detroit and from Houston to Orlando. Now that Spirit has entered the Detroit-Denver market, five carriers are offering roughly 8,601 seats in the market. Delta holds a 37% share followed by Southwest representing 22% of the seats. Frontier accounts for a 19% share, followed by United at 11% and Spirit with a 10% share. 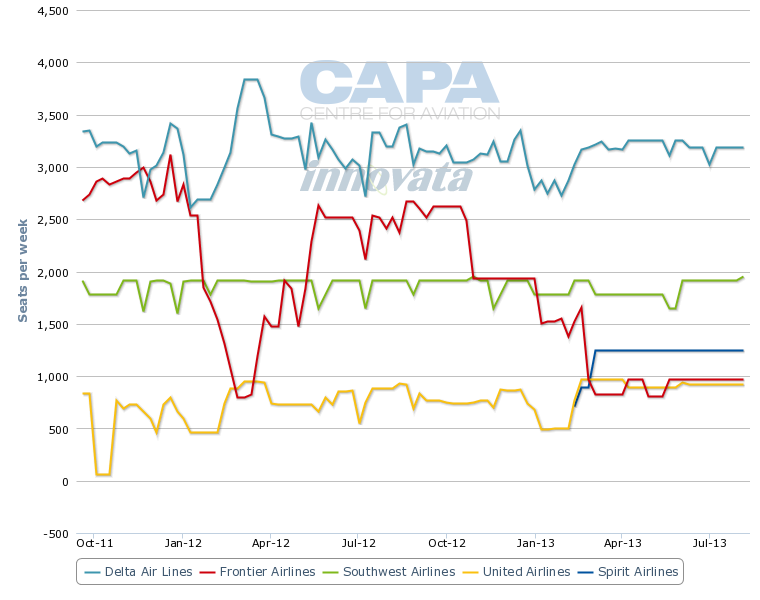 The carrier also launched new service from Houston to Orlando in Feb-2013 as part of a Dallas-Houston-Orlando routing. United and Spirit currently offer 8,247 seats in the market with United representing an 88% share and Spirit accounting for 12% of the seats. Southwest also offers 4,384 seats between Houston Hobby and Orlando. Schedules in Innovata show that its subsidiary AirTran will add approximately 819 seats to the market in Mar-2013.

During Apr-2013 Spirit is introducing service from Baltimore and Philadelphia to its fourth largest base Las Vegas. Shortly after Spirit introduces service between Baltimore and Las Vegas, roughly 6,400 seats will be available in the market with Southwest holding a 66% share, its subsidiary AirTran representing 15% of the seats and Spirit holding a 19% share. Spirit will also compete with Southwest on its service from Philadelphia to Las Vegas. Of the nearly 8,000 seats on offer when Spirit debuts its flights, Southwest will hold a 15% share compared with a 16% share held by Spirit. US Airways accounts for the majority of seats on offer with a 69% share. 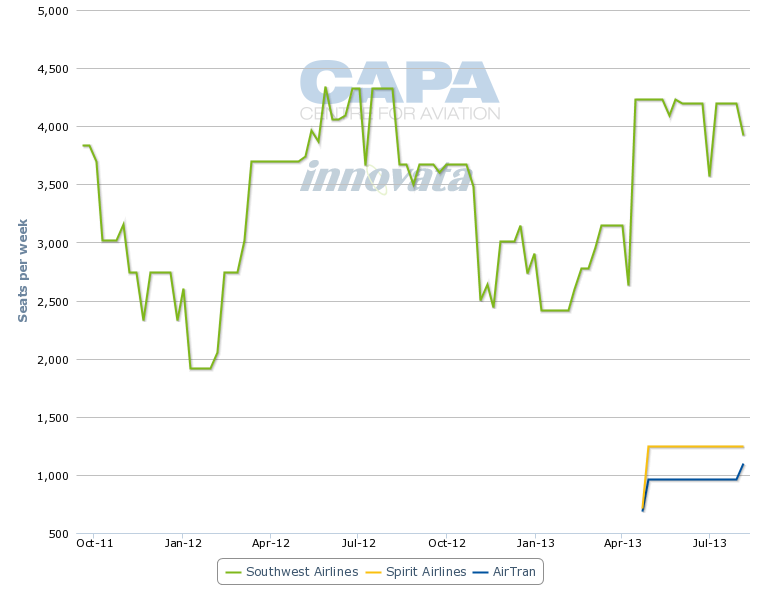 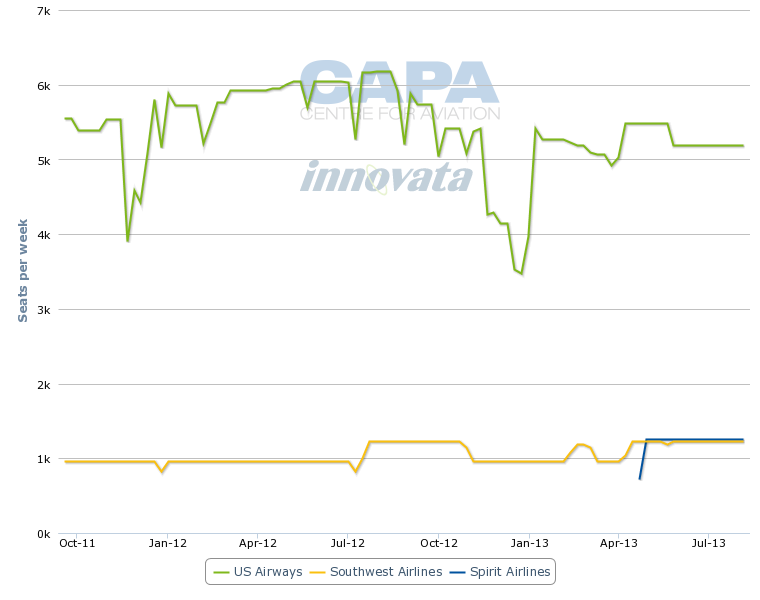 Among the seasonal flights Spirit is introducing in Apr-2013 is new service between Minneapolis and Denver, which is already served by Delta, Frontier, Southwest and United. Spirit’s service in the market runs through Nov-2012. Other seasonal service Spirit is launching in Apr-2013 includes flights from the golfing and leisure destination Myrtle Beach to Baltimore and Philadelphia.

Connecting the dots in 2013

Spirit during 2012 added 29 new markets, and during 2013 expects the bulk of its growth to stem from adding new routes between existing destinations to increase cost efficiencies by more fully utilising network assets, said Mr Baldanza. With the exception of cancellations from Dallas to Boston and Chicago to Los Angeles, Spirit’s business strategy seems to be running along smoothly as it is being left alone to chase the low-hanging fruit in legacy carrier markets.

As the US market matures and shakes out with the latest round of consolidation producing three major carriers chasing high-yielding customers, more opportunities could arise for Spirit and other low-cost carriers looking to capitalise on consolidation in the market place.