The opportunities were negotiated in connection with the US-Japan Open Skies agreement concluded in Dec-2009. They permit US carriers to introduce a total of four daily round-trip services at Haneda. If the proposed decision is made final, the selected carriers would be required to commence Haneda operations by 29-Jan-2011. Objections to the show-cause order are due in ten days and answers to objections are due seven days later. After the comment period ends, the department will issue a final decision.

The following route applications were made:

Shares in Australian Infrastructure Fund (AIX) fell 7.6% on the completion of the airport operator’s placement of approximately 44 million new securities at an issue price of AUD1.82 per new security, raising approximately AUD80 million. The placement was well supported with demand from both existing and new institutional investors. As previously announced, the funds raised will be used to acquire an additional 2.21% stake in Australia Pacific Airports Corporation (APAC). The balance of the capital raising will be used for transaction costs and general purposes. The new securities are expected to settle on 13-May-2010 with quotation on 14-May-2010.

These strategic airport news updates are featured in today’s edition of Airport Business Daily. Subscribe today for the latest news briefs on Today Haneda Airport and Japan Airport Terminal, Australian Infrastructure Fund and European airports and suppliers and much more. 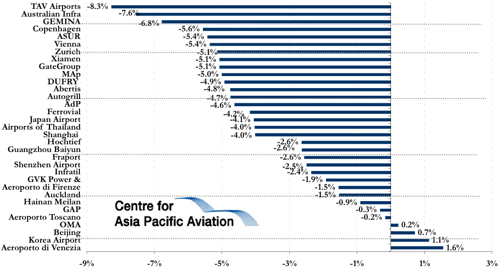