US carriers are biggest earners as ancillary revenues top USD21bn

US mainline carriers are leading the effort to transform the airline business model with ancillary revenues, according to the 2010 Amadeus/IdeaWorks study which shows United/Continental, Delta and American as the top ancillary revenue earners in 2010. They were joined by only one international carrier as number four – Qantas – while US Airways was number five.

Worldwide, the industry earned USD21.46 billion, cementing the creation of an airline business profitability which will ultimately be built more on fees than on tickets. This is likely only the tip of the iceberg as airlines gain sophistication and roll out new products. Key to this strategy is wresting control of passengers from global distribution systems as is being tried by American and US Airways in their lawsuits against GDSs. The end game could come as the US Department of Justice investigates GDSs for alleged antitrust violations. 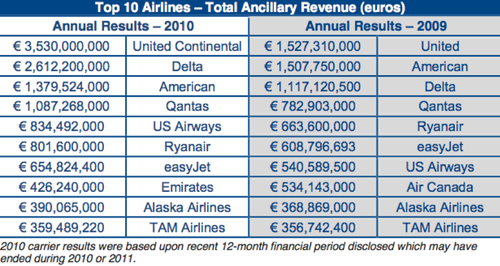 Source: Amadeus/Ideaworks  Continental didn’t even make it to the 2009 rankings while US Airways jumped from
seventh to fifth in ancillary revenues. Air Canada, number eight in 2009, dropped off the list in 2010. Interestingly,
emirates made it into the top 10 last year.

Perhaps the most interesting news released by Amadeus/Ideaworks is Amadeus’ Airline Ancillary Services inking contracts with 16 airlines, nine of which will use it for online and travel-agency channels.

“Ancillary revenue has become an enduring part of airline income statements, as revealed by this study,” says Amadeus VP Marketing and Distribution Ian Wheeler. “True financial success for airlines is boosted when these services are available through online, travel agency, and corporate travel distribution channels. That’s why we are seeing growing momentum behind Amadeus Ancillary Services solution, which helps carriers sell à la carte ancillary services on their website, call centre and via travel agencies. We are continuing to evolve the product functionality.”

IdeaWorks president Jay Sorensen weighed in on the Amadeus ancillary programme. “As you can tell from the number of carriers signed up by Amadeus, this is an evolving activity,” Mr Sorenson said of the Amadeus effort. “Much ground has been covered and much is left to cover.  The crucial part is this – airlines are realising they need to distribute services to all audiences – not just consumers visiting carrier websites.”

Amadeus developed a unique interactive catalogue which clearly displays the range of additional airline services available allowing travel agencies to view, book and sell ancillary services quickly and efficiently, according to the company. The catalogue has been launched in cryptic so that travel agents who prefer to use the long-standing GDS interface can also sell ancillary services on behalf of airlines.

“At Amadeus, we are committed to helping airlines adapt and evolve their ancillary services strategy so that they can move their focus from pure revenue to delivering profitability,” said Amadeus VP Airline IT Julia Sattel. “Whilst the sale of ancillary services may have become standard, the processes are not, and non-standard processes can be costly. Our goal is, therefore, to deliver end-to-end, fully integrated and automated solutions across all airline operations and processes; as the benefits are clear.”

The news came after the annual Amadeus Review of Ancillary Revenue Results and comes as the industry continues to wait for the long-delayed 2010 statistics from the US Department of Transportation’s Bureau of Transportation Statistics. Queries to the department indicate they are ready but haven’t been cleared for release. They are usually issued during the first week of May. Even so, BTS only captures a handful of fees compared with the Amadeus/IdeaWorks study.

Meanwhile, the Amadeus/IdeaWorks study shows the number of airlines dipping into the ancillary revenue arena rose from 23 in 2007 when the industry made USD2.45 billion or EUR1.72 billion, to 104 in 2010. However, only 47 disclosed ancillary revenues of USD21.46 billion or EUR15.11 billion or a 38% growth from 2007. The EUR15 billion was shy of the EUR18.4 billion projected by IdeaWorks last autumn.

“These numbers only represent the revenue actually disclosed by 47 airlines, billions more likely lie within the revenue statements of dozens of other carriers,” said Mr Sorenson, who authored the Amadeus study.

The survey revealed that airlines are deploying more products as they become increasingly savvy retailers. Branding has been emphasised, pricing is more sophisticated and an increasing number of features are presented during the booking process, according to the study.

Just as interesting is the fact that United/Continental ranked 10th in the list of aggressive carriers where the percentage of revenues from ancillaries is higher. Some 14.7% of its revenues came from ancillaries last year with the rest of the top-10 made up of low-cost carriers around the world.

Ancillaries as a percent of revenues 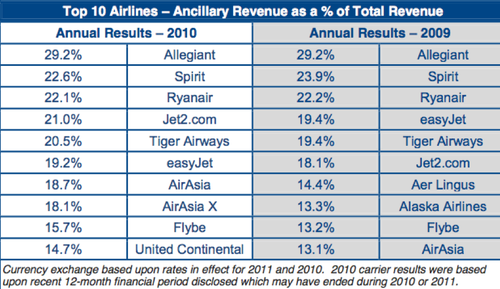 Source: Amadeus/IdeaWorks  Ancillary revenue as a percentage of total revenue provides a better measure of ancillary
aggressiveness and marketing acumen. This method of measurement allows low-cost carriers to dominate the top-10 list for 2009 and 2010.

Once the realm of low-cost carriers, ancillary revenues took off in 2008 on the oil spikes but have grown 778% since 2007, according to the study. Not surprisingly, Ryanair, easyJet and Aer Lingus dominated the 2007 list but Aer Lingus did not make the top 10 in 2010.

The Amadeus/Ideaworks study recalled Ryanair CEO Michael O’Leary’s forecast that ancillaries will eventually replace fares. That is highly unlikely but airlines could join other businesses run on ancillaries such as cinemas and movie studios, where popcorn and DVDs pay much of the freight.

“The results suggest this objective may top out at 30%; the best performers achieve rates of 20 to 29%,” said the study. “Ancillary revenue certainly helps the bottom line and definitely reduces the pain of high fuel prices. But its ability to eliminate air fares remains elusive for Ryanair and the airline industry.” 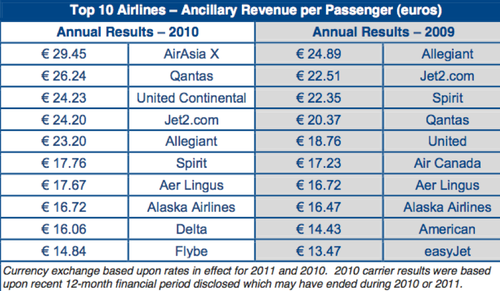 “Consumers have embraced the long-haul - à la carte concept; the carrier’s continued growth and planned share offering are signs of this success,” the study concluded, adding that harmonising the two programmes will likely see United’s revenues grow this year. “The strong showing by a merged United and Continental is a significant development for 2010. United has been hard at work for years perfecting its à la carte product offer under the Travel Options by United brand name. Continental has been innovating, too and added fare lock and extra legroom seating options during 2010. IdeaWorks estimates the combined revenue from the sale of United Mileage Plus and Continental OnePass miles was approximately USD3 billion (EURO2.1 billion) for 2010.”

Delta, United/Continental, Qantas and Alaska are the traditional airlines that make the most from each passenger, according to the study, although AirAsiaX, the low-fare, long-haul carrier, tops the list at EUR29.45 compared with EUR26.24 for Qantas and EUR24.23 for United/Continental. American and Air Canada dropped off the top 10 list between 2009 and 2010. The study, citing AirAsia X’s increase from EUR17.08 in 2009, confirmed the common sense conclusion that passengers spend more on long-haul flights.

“Large carriers have learned how to generate large ancillary revenue numbers,” said the study. “Continental disclosed its ancillary revenue results for the first time when it merged with United. The combination has created an ancillary revenue giant with annual results in excess of nearly USD5 billion or EUR3.5 billion.”

Delta has led the metrics measured by BTS in the past but its second place to United/Continental in overall ancillary revenues is not surprising given the fact the latter has surpassed it in size. Delta expanded baggage fee to the international arena across the Atlantic and added Wi-Fi, on-demand movies, on-board meals and SkyClub passes.

The study indicated that Delta’s increase to USD3.7 billion in 2010 was largely attributed to increased financial transparency at the airline as well as USD1.5 billion from its SkyMiles programme including the sale of miles to partners.

“Qantas disclosed ancillary revenue of AUD334 million (EUR252 million) from traditional à la carte sources,” the study said. “However, it is the Qantas Frequent Flyer Programme that really piles on the profits. Revenue posted by the programme was AUD1.108 billion (EUR835 million) for 2010. Points in the programme have seemingly gained the status of official currency through partnerships with major Australian retailers and banks. With 7.2 million members, that’s a stunning AUD154 (EUR116) for every programme member.”

During recent earnings calls, one analyst asked if airlines had maxed out their ancillary revenue capability. The answer is clearly no given the fact that few have adopted Virgin America’s programme of linking retailers to the holy grail – captive airline passengers – with buy-on-board programmes. It is, in fact, a major part of its in-flight entertainment offering. In addition, airlines seem to be only at the beginning of their creativity when it comes to ancillary products.