US Airways (-0.3%) announced plans to realign its operations to focus on the airline's core network strengths, which include hubs in Charlotte, Philadelphia and Phoenix, and a focus city at Washington's National Airport. The carrier will make the following changes to facilitate the realignment strategy:

American Airlines (-7.8%) also announced plans to cut jobs, stating it plans to cut up to 700 positions from its maintenance and engineering operations, in line with its smaller fleet. In line with the job cut plans, American Airlines plans to wind down operations at its Kansas City Maintenance Base in 2010, after closing the base in Sep-2009. Operations at other locations, including in St Louis, will also be downsized. The carrier stated it will offer “voluntary separation offers” for unionised staff.

The carrier also revealed during trading it has hired Rothschild to assist in acquiring a small stake in Japan Airlines, following similar moves by Delta Air Lines (-5.9%).

The US Bureau of Transportation Statistics (BTS) reported average domestic fares in 2Q2009 fell to their lowest second quarter level since 1998, dropping 13% year-on-year in the largest year-to-year decline on record.

TAM and GOL take a dive 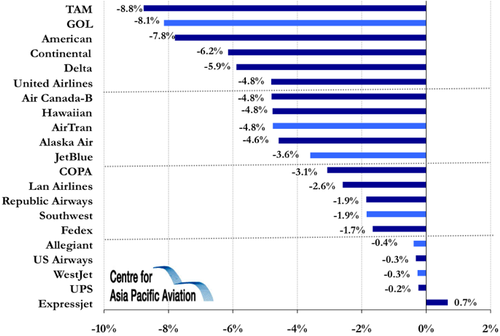