Just as the magnet of airline profitability is attracting investors, the same magnetic fields are proving to be irresistible forces for labour. As a consequence, some major US airlines remain bogged down in contentious labour negotiations that have resulted in a swarm of negative publicity for those companies. The management teams of airlines such as Southwest Airlines and Delta are attempting to navigate the conclusion of labour deals that offer fair compensation and benefits to employees, while at the same time making declarations to shareholders and investors about a transformed industry delivering consistent and record profits.

The continuing labour turbulence for Delta, Southwest and Hawaiian reflects the impatience of employees, anxious not to be left behind as airline profits grow. Those airlines face the challenge of negotiating contracts that reward labour for its contribution to stable profitability, while also ensuring that the productivity in those agreements creates a minimum level of cost inflation.

Stakes are high for both management and labour in the current round of contract negotiations, which means that collective bargaining could drag on for many months. As airline executives continue to reiterate their desire to reach new contracts, labour’s rhetoric for market rate pay is growing stronger.

(Note: this report was compiled prior Southwest Airlines reaching a tentative agreement with management on 29-Aug-2016)

Delta's latest contract negotiations markedly different from those of recent past

Delta reached a historic milestone in 2008 when the pilots of Delta and Northwest reached an integrated seniority agreement prior to the closing of the merger between the two airlines. In another unprecedented move, the company also reached a joint contract with the combined pilot group before the merger’s closure. In 2012 Delta pilots ratified a contract ahead of the agreement’s expiration date that allowed Delta to incorporate into its fleet the 88 Boeing 717s that Southwest was looking to shed after it acquired AirTran Airways.

As profitability grew, negotiations between management and Delta to forge a new contract during 2015 were very different. Pilots rejected a tentative deal that altered the airline’s profit sharing formula. The rejected agreement included a 20% profit share above a pre-tax profit of USD6 billion and a 10% share for profits below that level. The current structure is 10% of pre-tax income up to USD2.5 billion and a 20% payout for profits above that amount. Delta’s pre-tax profit in 2015 was USD7.2 billion.

The agreement rejected by Delta’s pilots featured a 21% pay increase over three years.

Now, after a change in union leadership the airline’s pilots – represented by the Air Line Pilots Association (ALPA) – are seeking a 37.25% pay increase over a three-year period versus a proposal by management of 27.3% over the course of four years. Delta’s ALPA unit recently declared that the union and management remain apart on scope, vacation and other work rules.

There is no shortage of data available that management and labour can manipulate in order to support their given position. From a top-line expense standpoint, Delta’s salaries and benefits grew 10% year-on-year in 1H2016 to USD4.7 billion, and that line item will certainly grow once a new agreement is in place.

Delta’s pilots have stressed that their salary proposal would restore compensation to pre-Chapter 11 levels (both Delta and Northwest entered bankruptcy protection on the same day in 2005). Employees of airlines that underwent Chapter 11 reorganisation have not forgotten the concessions they made to allow their respective companies to emerge from bankruptcy.

Memories of earlier sacrifices still run deep, and those waters risk being stirred up, with emotive results. Some employees feel that they need to recapture in full what was lost in order to enter a new phase of labour-management relations.

Rises in one airline  are inevitably infectious. Pilot discontent at Hawaiian Airlines reflects the frustration of labour groups across the US industry over a lack of compensation on par with the industry average. The airline’s pilot contract became amendable in Sep-2015, and the two sides have jointly sought mediated negotiations.

Earlier in 2016 Hawaiian’s pilots carried out picketing, and voted in favour of a strike if negotiations were to fail. The pilot group, also represented by ALPA, recently outlined plans to establish a strike operations centre in Sep-2016 – a signal of their continued frustration over what they conclude is inadequate pay. ALPA has previously declared: “Both the company and public should know that there’s no reason why Hawaiian pilots should earn 35% to 45% less than our fellow airline pilots”.

Pilots at Hawaiian have proposed a 52% raise during the first year of a new contract, and the airline’s management has admitted that it is not surprised by the ask, given some of the new contracts recently concluded by larger network US network airlines.

Offering admirable candour, Hawaiian executives have acknowledged a unit cost increase of some magnitude associated with a new pilot contract. But company management has stressed that is not a reason to delay concluding a new deal.

Although Southwest continually stresses the importance of reaching labour contracts with its work groups, the airline has garnered unprecedented publicity in its pilot and flight attendant negotiations, which have dragged on for years. During the last year pilots have sued the airline, contending that Southwest cannot operate the Boeing 737 Max without a new contract. They have conducted numerous picketing sessions and, along with other labour groups, have suggested that CEO Gary Kelly and COO Mike Van de Ven step down.

See related report: Southwest Airlines: Where is the LUV? Rivals have advantages as labour relations crumble

After rejecting a tentative agreement in 2015 that included a 17.6% pay raise over four years, in 2016 Southwest pilots have proposed a 33% compounded raise over seven years to Oct-2019, and an 18% hike in pay rates upon contract ratification to cover the negotiation period during which they did not receive pay increases.

Their request is against a backdrop of Southwest having issued USD5.5 billion in shareholder rewards between 2013 and 2016, and grown net profits by 79%, 51% and 92% annually from 2013 to 2015. Southwest’s pilots have acknowledged the necessity of sharing profits with shareholders, but believe the equation is out of balance.

During the past few years Southwest management has continually highlighted the necessity for cost containment as large network airlines have become more cost-competitive after their bankruptcy, and ULCCs themselves have a cost base far below that of Southwest. “We can’t have lower overall operating costs if our labour costs aren’t lower. We can’t have lower labour costs if we aren’t more productive”, Southwest CEO Gary Kelly has warned.

CAPA’s airline unit cost index for 2015 shows that Southwest’s unit cost versus average trip length was USD6.94 cents – higher than those of the ULCCs Allegiant and Spirit, and higher than those of the more hybrid LCCs such as jetBlue and Virgin America. Southwest’s costs were below the full service airline trend line, but above the low cost carrier average. (The calculations include fuel costs and are based on an airline’s average trip length. CASK is calculated from operating costs before exceptional or non-recurring items. As most of the world's airlines report in cost per available seat kilometre, this measure is used instead of miles. All currencies are converted into USD.)

CASK versus average trip length for selected US airlines: 2015 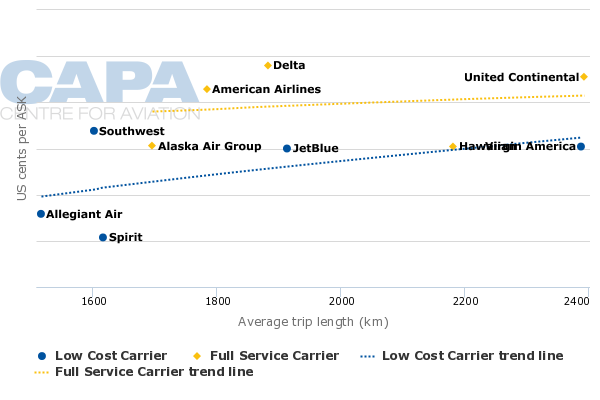 Source: CAPA - Centre for Aviation
Disclaimer: The CASK Relativity Index has been prepared by CAPA – Centre for Aviation (“CAPA”). The CASK Relativity Index has been prepared for general information only and while every effort has been made to ensure the quality and accuracy of the data, CAPA assumes no responsibility for errors and omissions related to the data, calculations or the analysis contained therein and in no event will CAPA, its associates or subsidiaries, directors or employees be liable for direct, special, incidental or consequential damages (including, without limitation, damages for loss of business profits, business interruption, loss of business information) arising directly or indirectly from the use of this data.

Southwest always maintains that on a stage length-adjusted basis its unit costs are in line with those of US low cost airlines; but the reality is that its cost inflation could be significant, even with a pilot deal that encompasses a compromise on pay rates.

The concern of some Southwest investors appears to be a lack of revenue generating initiatives to offset the inevitable rise in labour costs. Southwest has decided not to participate in unbundling or product segmentation. It has recently expressed an interest in forging codeshares, but gaining labour approval for those industry-standard tie-ups will be a tough battle for the airline’s management.

The pay raise proposals by pilots of Delta, Hawaiian and Southwest are the baseline for negotiations; obviously the final agreement will reflect a compromise between management and labour, but the claims show that the industry bar on pilot pay is moving higher.

Delta, Southwest and Hawaiian pilots are no doubt studying the work rules and benefits associated with those increases to ensure that they remain on par with industry pay rates that are increasing. During the next cycle – which for United comes in two years and American in four – those airlines will face their own individual demands for increased employee compensation.

The latest collective bargaining puts management-labour relationships to the test

Contract negotiations are among the most emotional and complex elements of the airline business.

The current round of US airlines negotiations seems particularly full of rhetoric as employee groups aim to ensure that they are compensated fairly for their roles as stakeholders in the airline business, along with shareholders and customers.

Pilot negotiations at Delta, Hawaiian and Southwest are at various phases, but the common thread is that pilots at those airlines aim to capture what they deem to be market-based pay. Each side must be willing to compromise in order to maintain or rebuild positive labour relations.