After battling integration challenges that derailed its operations during the northern hemisphere summer of 2012, United Airlines faces the difficult task of attempting to recapture corporate customers lost during that time. Meanwhile the carrier is attempting to control its climbing costs, which increased 11% on a unit basis during 1Q2013.

As its legacy peers Delta and US Airways recorded profits during 1Q2013, United bled USD325 million during the quarter. Factoring in special charges the carriers recorded a USD417 million loss for the first three months of 2013. 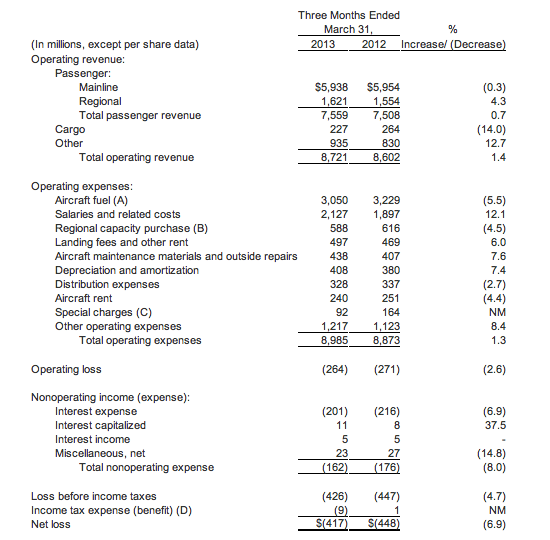 United assures its unit costs during 2Q2013 should increase in the 6.7% to 7.7% range, and attributes a large part of the double-digit unit costs increase for 1Q2013 to a 4.9% decline in consolidated capacity year-over-year. Similar to Delta, United has also been investing in product improvements including the installation of lie-flat seats and WiFi connectivity. Other technological investments include a new mobile phone application, enhancements to its front-end passenger service system used by gate and check-in agents, and anew winglets for its next-generation Boeing narrowbodies that will cut fuel burn by 1.8%.

At the same time to allay investor concern about creeping costs United has previously announced cost cutting initiatives that include slashing two-thirds of the airline’s administrative and management positions. However, despite the resumption of Boeing 787 service on 10-Jun-2013 with the launch of service from Denver to Tokyo Narita, United CFO John Rainey cautioned that United needed to cut its costs to cover the additional capacity decline triggered by the grounding of the aircraft. United estimates that during 1Q2013 it incurred USD11 million in special charges from the aircraft’s time out of service.

Even as United’s top-line results were relatively weak, the carrier recorded a significant improvement in passenger unit revenue during 1Q2013, growing that metric by nearly 6% year-over-year after lagging markedly behind its peers during 2012. For full-year 2012 United’s unit passenger revenue growth was flat, compared with 7% growth at Delta, a nearly 6% rise at American and 4% growth for US Airways.

See related article: United pledges it is on the road to revenue recovery as yields improve

On a regional basis United’s best performance was on the trans-Atlantic, where unit revenues and yields grew 11% and 7%, respectively, on a 10% decline in capacity. United chief revenue officer Jim Compton remarked that the carrier reduced capacity on the trans-Atlantic in response to the continued economic weakness it sees in Europe. Delta has also been reducing its trans-Atlantic capacity during times of slower demand, and during 1Q2013 it also trimmed capacity by nearly 11%, which helped the carrier grow unit revenue 8% year-over-year and yields 9%.

United turned a solid performance in the Pacific during 1Q2013 despite continued pressure from the depreciation of the yen. Its unit revenues grew 7% year-over-year in the Pacific while yields were basically flat. Most of the momentum United enjoyed during the quarter was from its Chinese markets, where unit revenues grew 13% year-over-year during 1Q2013.

Mr Compton remarked that the falling value of China’s currency reduced United’s 1Q2013 passenger revenues by USD20 million. As the largest carrier between the US and Japan in terms of seats on offer, Delta has also faced pressure from the yen’s decline, and has hedges in place worth USD240 million to dull the effect’s of the Japanese currency decline. The carrier recently remarked that even with the hedges in place, Japan point of sale remains under pressure, especially in leisure beach markets.

New pressure from Virgin America on US transcontinental routes from Newark

United cut its US domestic capacity 4.5% during 1Q2013, which helped lift unit revenues by 3.6% while yields inched up 1%. However, the carrier moving forward is seeing some competitive domestic pressure as Mr Compton specifically highlighted pressure from Virgin America on its new thrice daily flights from United’s Newark hub to San Francisco and Los Angeles.

Virgin America’s entry into those markets has lowered fares by more than 20%, said Mr Compton, which he warned would negatively impact United’s second quarter unit revenue performance, which was just starting to gain traction.

As Virgin America has lowered fares in those markets, demand has increased, said Mr Compton. To seize on the added demand he explained United has shifted its capacity from elsewhere in its network to those markets in order to maintain its leading position in those markets. United currently accounts for 83% of the seats on offer between Newark and San Francisco and 76% from Newark to Los Angeles, a market where it competes with both Virgin America and American. 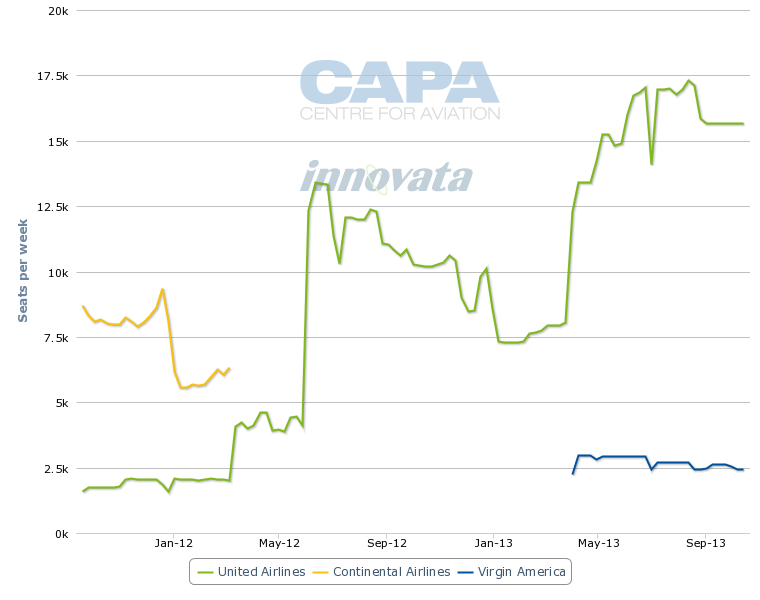 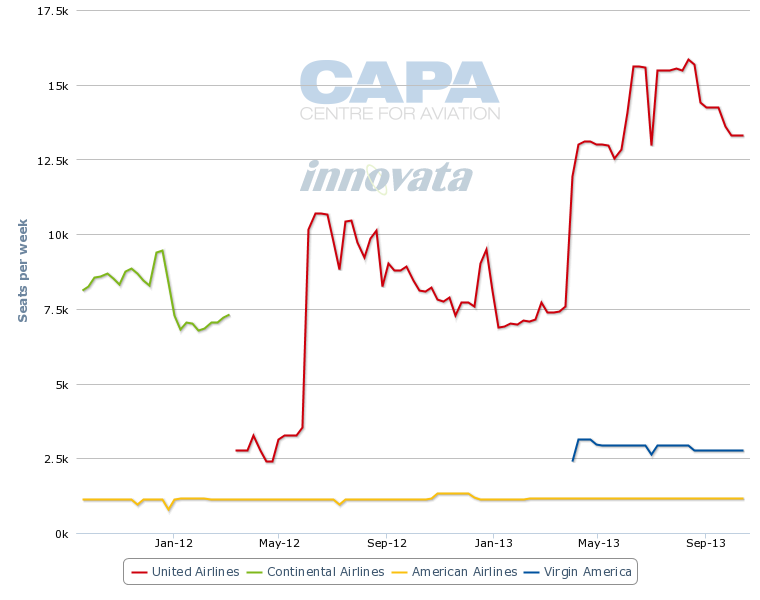 United no doubt has been forced to lower fares in those markets due to the heightened competition from Virgin America. As it adds on frequencies in those transcontinental markets it appears willing to endure revenue degradation until Virgin America raises fares or pulls back in some of the markets.

Neither scenario is likely for a while as Virgin America’s financial results show it is willing to stick it out in certain markets even as losses mount. Those two markets are important transcontinental routes in Virgin America’s network portfolio and the carrier has worked for years to gain slots at Newark. The result is while both United and Virgin America will continue to see revenue pressure in those markets.

Pressure from sequestration lingers into 2Q2013

The operational disruptions triggered by cross-fleeting of United and Continental aircraft during 2012 summer high season sent many of the airline’s high yielding business travellers scurrying to other carriers, and since that time United has been working to win back those passengers.
United’s attempt to recover corporate revenue occurs as overall demand is softening in the sector driven somewhat by US Government budget cuts known as the sequester.

Mr Compton estimated that corporate revenues increased by about 4% during 1Q2013. But in speaking to analysts to discuss the carrier's 1Q2013 results he warned that certain economic indicators – including the US GDP outlook – have weakened since the beginning of 2013, which has affected the mix of business travellers in the carrier's markets during Apr-2013.

Outlining the effects of the sequester on demand, Mr Compton remarked that United’s government-contract travel declined about 25% during 1Q2013, “and we expect this to persist in the near term”. He estimated that government travel represents about 2% of United’s overall revenue.

That compares with conclusions by Delta that government sector travel accounts for about 3% of its corporate revenue base. Recently, Delta estimated its ticketed revenue in that space was down about 15% to 20% during the last month.

Sequestration cuts are likely to pressure demand in the foreseeable future, and, coupled with other threats of increased taxation from the federal government, could hamper the fragile profitability US carriers have enjoyed during the last couple of years. United CEO Jeff Smisek warned that the federal government recently proposed a budget that could cost the US airline industry more than USD5.5 billion in taxes in addition to the USD19 billion those airlines already pay. The proposed increase is more than the total profits recorded by US airlines during 2012.

United in particular faces the daunting task of recapturing lucrative corporate share as overall macro-economic indicators are neutral at best. Taken together with its efforts to contain costs, 2013 could prove to be just as or even more challenging for the airline than 2012 – when integration headaches pressured its profitability throughout the year.