US budget cuts, increased payroll taxes, currency fluctuations general uneconomic uneasiness would have crippled the country’s aviation business just a few short years ago. But Delta withstood all of those menaces during 1Q2013 to eke out a small profit even as high-yielding close-in bookings dropped near the end of the quarter and leisure travel demand softened.

Despite those headwinds lingering somewhat into 2Q2013 with predictions that its system unit revenues will be flat to down for the quarter, Delta remains bullish about recording an annual profit. Key to the carrier’s continuing positive outlook is its conclusion that fundamental shift has occurred in the business – tight capacity management has resulted in a stronger correlation between revenue and fuel prices. In the current operating environment, “the same economic factors that cause passenger revenue softness also pushed down oil prices,” declared carrier CEO Richard Anderson as he assessed Delta’s 1Q2013 performance.

Excluding special items the carrier recorded net income of USD85 million, a USD124 million improvement from the year prior. Even after the special charges Delta turned its first profitable quarter in more than a decade. 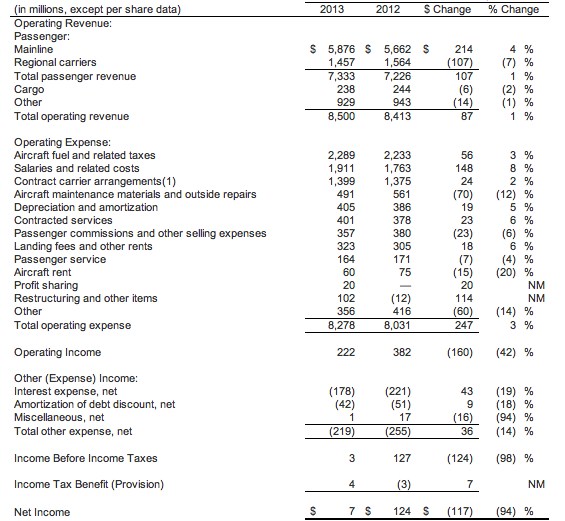 Delta’s system passenger unit revenues increased 4% year-over-year with yields growing 2% on a 1.6% decline in capacity. A strong Jan-2013 and Feb-2013 helped drive the unit revenue growth but the spending cuts ushered in by the US Government, known as the sequester, began pressuring close-in bookings in mid Mar-2013 while leisure demand also softened.

Delta president Ed Bastian estimated the US defence business accounts for about 3% of Delta’s corporate base, and that ticket revenues during that space in the last few weeks were down 15% to 20%. Mr Bastian explained that Delta’s revenue management during 1Q2013 was predicated on strong demand at the beginning of the year, which resulted in a bias towards pushing for yield, which exacerbated the effects of the drop-off in demand. Even with demand weakening at quarter’s end, Delta still recorded a 6% increase in corporate revenues during 1Q2013.

Some of the softening demand was likely offset by continuing improvement in Delta’s trans-Atlantic markets, where unit revenues increased 8% year-over-year during 1Q2013, driving yield growth of 4% in the region. Delta’s Pacific markets continued to be dragged down by the weak yen, as the carrier accounts for the largest presence in terms of seats between the US and Japan.

Delta’s Pacific unit revenues grew 3.7% year-over-year but yields were relatively flat at 0.4%. The carrier has instituted some hedges against the weak Japanese currency but the declining yen has also affected Delta’s Japanese point-of-sale, particularly in the beach markets, Delta explained.

Mr Bastian estimated the total impact to Delta’s performance from the weak yen and the resulting softness in demand impacted system unit revenues by 1ppt in the quarter and expects those effects to continue into 2Q2013. “We are looking at an overall system impact of up to two points for April and the rest of the second quarter,” Mr Bastian explained. As a result Delta is examining options for reducing capacity in beach markets during off-peak periods. 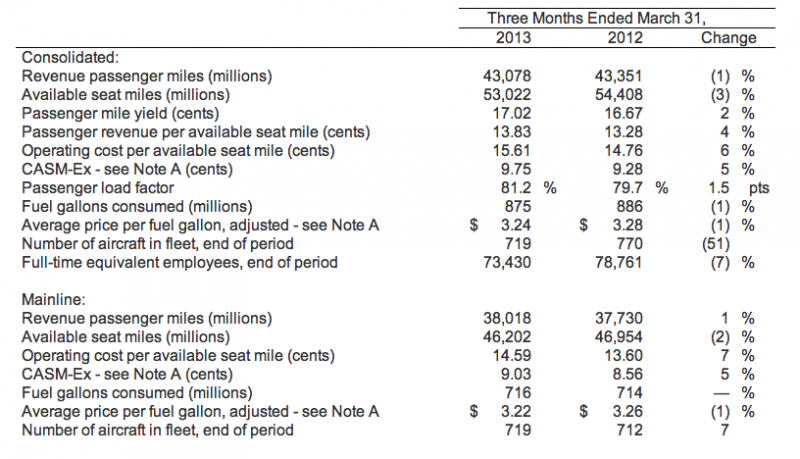 Any one of the factors that affected Delta’s revenue during the end of 1Q2013 – government spending cuts, general macroeconomic uncertainty and currency challenges – would normally derail any chance of profitability for a large US carrier. But Mr Bastian assured Delta moved quickly to shift its revenue management strategy, which means most of the detrimental effects of managing towards higher yields should be isolated to Mar-2013 and Apr-2013.

Delta's CEO Richard Anderson explained that demand trends at the end of 2012 and heading into 2013 were quite strong, which led Delta to manage its inventory with a bias towards yield instead of load factor. When close-in demand began showing weakness, Delta opted to backfill the inventory with more lower-yielding traffic. But that likely went so far as the carrier also saw weakness in leisure demand heading into the end of 1Q2013.

Mr Anderson stated the carrier is always fine-tuning its revenue management to ensure it is adequately capturing fuel prices, which underpins his statements of a tighter correlation between those two elements. Noting capacity is the “fulcrum” point, Mr Anderson believes Delta in particular has an advantage since the carrier has a large number of owned aircraft that carry no fixed costs, and coupling that with a 30 day bid period of its crews allows Delta to adjust its capacity quickly.

Delta is coupling its professed nimbleness in managing capacity with a run rate during 2013 of USD600 million towards a USD1 billion cost improvement programme the carrier launched in 2012 as some of its network and product investments began to spike unit costs. The pillars of its cost reduction programme include a domestic fleet revamp that entails the retirement of older Boeing 757s and the remaining legacy Northwest DC-9 aircraft as well as Delta’s highly publicised shedding of more than 300 50-seat regional jets between 2009 and 2015. 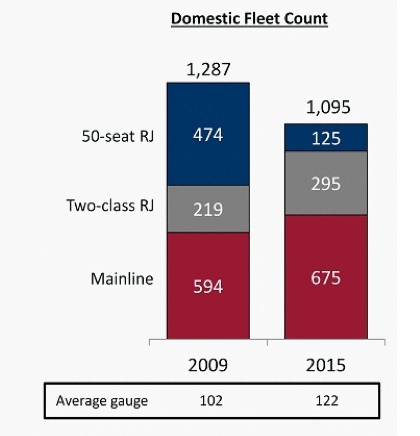 Delta's CFO Paul Jacobsen remarked that beginning in the Sep-2013 time period Delta would begin taking delivery of eight to 10 aircraft per month, which will allow for the retirement of 40 older mainline aircraft. The first of 88 Boeing 717s that Southwest is offloading onto Delta are scheduled to be incorporated in the carrier’s fleet during 2013. It is also scheduled to take delivery of the first of 100 737-900ER jets the carrier ordered in 2011. At the same time Mr Jacobsen estimated more than 40 of the carrier’s 50-seat regional jets would exit the airline’s fleet by year-end.

Previously Delta has estimated that the overhaul of its domestic fleet would represent a significant portion – USD300 million – of its cost cutting scheme. Roughly USD325 million was pegged to improved staffing efficiency, while the remaining USD375 million in cost improvement would stem from maintenance improvements, network efficiencies and other cost reductions.

High hopes for its refinery have yet to materialise

Losses during 1Q2013 from Delta’s Trainer refinery it purchased in 2012 reached USD22 million after a USD63 million loss during 4Q2012. Superstorm Sandy that struck the US east coast in late 2012 threw a kink into Delta’s professions that the purchase would produce a USD300 million benefit for the carrier during 2013.

The 1Q2013 loss was attributed to supply disruptions from an outage in gasoline production which affected Trainer’s output. Mr Jacobson expects a modest profit from Trainer during 2Q2013.

Delta is declining to offer guidance on full-year profit guidance from Trainer, Mr Bastian said, due to the current volatility of crack spreads, noting “it is hard to reconcile movements and crack spread to guidance”. His remarks are somewhat puzzling given a main driver in Delta’s purchase of Trainer was the ability it lent the carrier to better manage the swings of refining crude oil into jet fuel.

See related article: Delta’s unconventional fuel hedging strategy to be put to the test as its refinery opens

Some demand weakness lingers into 2Q2013

Delta expects unit revenues to remain flat year-over-year for 2Q2013 driven by continuing pockets of weakness in Apr-2013 before signs of modest improvement emerge in May-2013 and Jun-2013. Its system capacity for 2Q2013 should fall between remaining flat to rising 1ppt year-over-year.

The ability of Delta to record a profit in the typically difficult first quarter in the face of external challenges pressuring its revenue is commendable. But the factors that pressured revenues reflect a continuing challenge for US carriers that are trying to prove to investors that they are on the road to becoming investment grade – the inability of those carriers to predict when significant outside factors will crop up to significantly affect demand.

While Delta seems to have a handle on managing the fluctuations in demand triggered by currency pressure and government stalemate, its decision to purchase an oil refinery still remains under scrutiny as the likelihood of Trainer making a positive financial contribution to its finances diminishes.