Scrutiny over Delta’s controversial decision earlier in 2012 to purchase an oil refinery located south of Philadelphia, Pennsylvania will be revived in the coming days as the idle facility prepares to restart production at the end of Sep-2012. With the rapid run-up in jet fuel prices during the last 60 days Delta’s latest efforts to combat fuel price volatility will be closely watched by its competitors and the greater energy industry at large to determine if the carrier’s carefully constructed gamble to control fuel costs pays off.

As the start of full-scale production approaches, Delta’s enthusiasm for the project continues to grow as it aims to seek to alleviate the alarmingly rising rate of crack spreads, which during 2011 accounted for roughly 18% or USD2.2 billion of the carrier’s total USD12 billion fuel costs.

With its 2008 merger with Northwest Airlines firmly complete, and showing strong returns (evidenced by USD554 million pre-tax profit during 1H2012), Delta’s logic is to use the leverage created by the merger to strike out and pursue what it deems as game-changing initiatives to build a more durable business model. The carrier believes the refinery purchase is one of those ground-breaking pursuits that will distance it from its competitors.

But the move is not without its critics, who highlight that Delta could be underestimating the costs of running an oil refining operation and maintain the carrier is stepping beyond its traditional scope. Delta has attempted to create an arm’s length arrangement in running the Trainer refinery by creating a wholly-owned subsidiary, Monroe Energy, to handle the new business.

Delta’s aversion to engaging in high-risk capital expenditure is a significant factor in the carrier’s calculus in purchasing the refinery. Overall the combined purchase and investment in the Trainer facility represents a USD250 million investment for Delta, who calculates a USD300 million annual fuel cost reduction by acquiring the refinery, which will support about 80% of its US domestic jet fuel needs.

The carrier estimates to achieve the equivalent USD300 million fuel cost reduction through more traditional means would require a USD2.5 billion capital investment for 60 new generation narrowbody aircraft. Deliveries of the jets would take a number of years while Delta believes it should begin to see cost savings from the oil refinery purchase during 4Q2012.

Delta during the last few years has purposely shied away from placing huge aircraft orders in lieu of buying used aircraft that carry much lower ownership costs. In some ways the refinery purchase could be an extension of that strategy since the investment is relatively small compared to the outlay required for aircraft that could provide improved fuel efficiency, but ultimately require in some cases hard to manage capital costs.

After an unprecedented run-up in fuel costs in 2008, airlines during the last four years have been trying to wrestle volatile swings in the price of fuel that can even wreak havoc when the prices fall as fuel hedges, put in place to guard against rising prices, collapse. But even as fuel prices have fluctuated, they have remained at historic highs. Delta estimates its fuel prices during 1H2009 were USD2.16 per gallon compared with USD3.33 during 1H2012 – a rise of 54%. 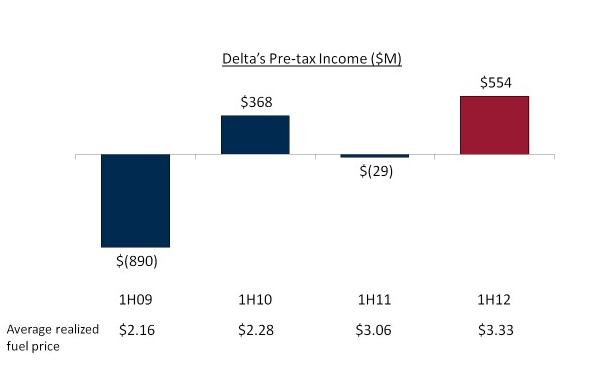 But a more sinister element in fuel costs is the crack spread, or the costs of refining crude into jet fuel. Delta calculates the cost of crude per available seat mile has risen roughly 10% since FY2009 while the crack spread has rocketed 73%.

Delta president Ed Bastian recently told investors the real enemy in managing fuel costs is the crack spread, and he does not see the wild increases in the compounded annual growth rates in those spreads abating anytime soon. At the time Delta revealed its plans to purchase the refinery, the carrier concluded that jet fuel crack spreads cannot be hedged in a cost effective manner. 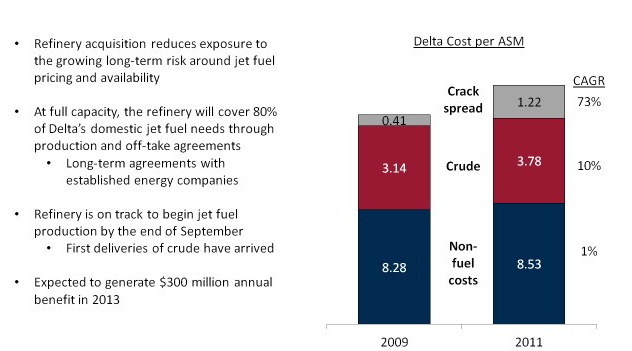 Some of the rapidly rising increases in crack spreads result from shrinking refining capacity, particularly in the US northeast. Mr Bastian remarked there is no question refineries in that region have been under duress during the last couple of years and many have shuttered their operations.

In its evaluation of the Trainer acquisition Delta determined that high gasoline prices and various conservation policies are driving a decline in gasoline demand, while demand for jet and diesel fuel is rising. The demand shift has driven an increase in jet fuel crack spreads and a converse decrease in gasoline spreads.

The tight supply that the remaining refineries are maintaining in order to improve pricing has driven crack spreads higher, Mr Bastian concluded. As Delta brings on more capacity, those costs should decrease. Delta’s subsidiary Monroe Energy plans to increase jet fuel production from 14% prior to Trainer becoming idle to 32%. Roughly USD100 million of Delta’s overall USD250 million investment in the refinery is dedicated to converting existing infrastructure at the facility to support jet fuel production.

Breakdown of production at Trainer refinery by fuel type 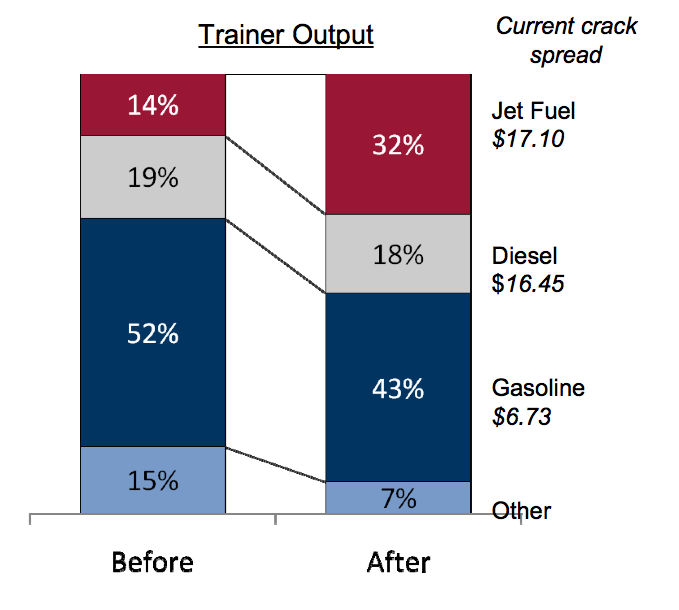 Mr Bastian remarked that Delta is likely the only owner of a refinery that prefers refining costs to decrease. But that preference supports Delta’s overall goal in its acquisition of the Trainer refinery, which is to better control pricing on its single largest expense.

Delta also sees opportunity to reap further rewards from its refinery investment through an exploration of potentially cheaper sources of crude oil from the Dakotas (the states of North and South Dakota) instead of typically higher priced crude Trainer receives from foreign suppliers across the Atlantic. Bastian said it was too early to draw on conclusions, but offered a bullish view that souring cheaper crude could offer even larger savings for the carrier than the estimated USD300 million in savings from using Trainer to control its domestic fuel supply.

Crude sourced from the Bakken rock formation has a price aligned with West Texas Intermediate (WTI) , which has fetched a lower cost than the Brent crude sourced offshore. Bloomberg on 11-Sep-2012 reported a price per barrel of USD97 for WTI compared with nearly USD115 for Brent.

Mr Bastian stated that looking out in the market place during the next several years there are no indications that prices of WTI and Brent will converge. But he acknowledged the price advantage of WTI diminishing is something being studied as the company examines sourcing Bakken crude.

Delta also stands ready to defend its acquisition under a scenario where gasoline crack spreads rise, noting that it would benefit from lower jet fuel prices given the converse relationship between crack spreads of gas and jet fuel.

While Mr Bastian attempts to shore up enthusiasm for Delta’s atypical strategy to take management of fuel costs into its own hands, the reality is the carrier is stepping into unchartered and unproven territory. But the USD250 million investment is small compared to the all-in USD12 billion it spent on fuel in 2011. Whenever companies decide to chart a new course to structurally change their business, doubters inevitably line up to poke holes in the logic for attempting something new. Whatever the outcome, Delta should receive some credit for taking a proactive step in attempting to manage fuel costs rather than staying stuck beating the same drum that fuel essentially remains the bane of its existence.