US airlines appear closer than ever to be taken seriously by an increasing number of investors as discourse over how to reward patient shareholders becomes commonplace. Years of capacity discipline, de-leveraging and prudent investment in product have garnered the attention of would-be investors that have historically been dismissive of an industry that seemed unable to manage the peaks and troughs well enough to create a business model that weathered inevitable economic downturns.

But since oil prices reached historical highs in 2008 and have remained near those levels during the last five years, US airlines have managed to turn profits during the last three years even despite this.

Against that backdrop executive teams at the country’s largest carriers have continually beaten the drum on capacity discipline and the paring down of debt, which allowed them to give serious consideration to shareholder returns. But investors remain understandably skittish about the longevity of the new-found discipline - and whether long-term lessons have really been learned from past mistakes. And significant challenges remain in achieving the sustainability investors seek. Prominent among these is the heavy hand of government in taxing and regulating the aviation industry. So says US trade group Airlines For America (A4A).

Delta CEO Richard Anderson told investors during late 2012 that the recent positive cash flows generated by the industry must be sustained. The continued de-risking of the business gives investors a level of confidence that “quarter in, quarter out, year-to-year we can continue to produce the kinds of returns that our capital owners deserve”.

US airlines enjoy a stock price rally in 2013, as profitability is promised

During the last 15 months, Delta has been at the forefront of a surge in US airline valuations, recording a 105% rise in its stock price valuation from 31-Dec-2011 to 29-Mar-2013, second only to US Airways, whose rise was fuelled by the impending merger with American Airlines. The average rise in the stock valuations of the nine largest US carriers during that same period grew at a faster rate than the S&P 500, according to a recent analysis by US trade group Airlines For America (A4A).

In its latest revision to global airline profitability, IATA estimates the mature North American market should record USD3.4 billion in profit for 2013. Based on IATA’s calculations the North American market will attain the second highest profit behind the USD4.2 billion expected by Asia-Pacific airlines, which operate in the more rapidly expanding emerging markets.

The association also highlighted a trend of a yield upturn for US carriers, underpinned by continuing capacity discipline and consolidation. Calculations show a steady recovery in yields by US carriers from a trough recorded during the economic crisis of 2009, as they trend notably higher than global averages. 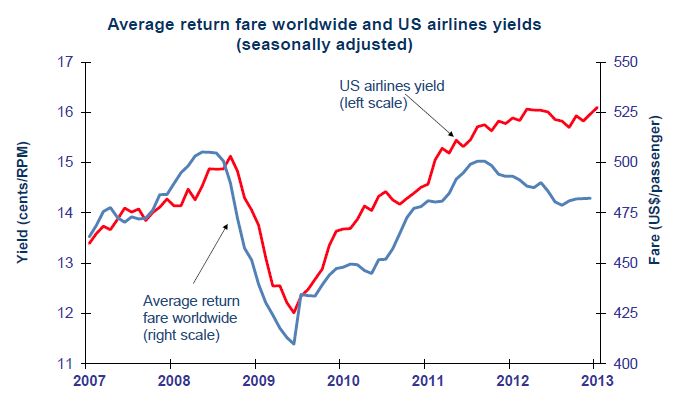 Some of the improvement can be attributed to improvements in US disposable income per capita since the downturn of 2009. While the levels haven’t returned to pre-downturn highs, they’ve been rising steadily since the beginning of 2012.

The recovery is made more remarkable as the yield recovery by US carriers has occurred against a background of stubbornly high oil prices (and crack refining spreads) as A4A estimates that from 2000 to 2012 fuel costs per gallon for US carriers increased by 286%.

At the same time those companies have undertaken an overhaul of their balance sheets as Delta is closing in on its USD10 billion debt target, having reduced its net debt by USD7 billion since 2009.

United Airlines change in debt and interest expense: 2010 to 2013 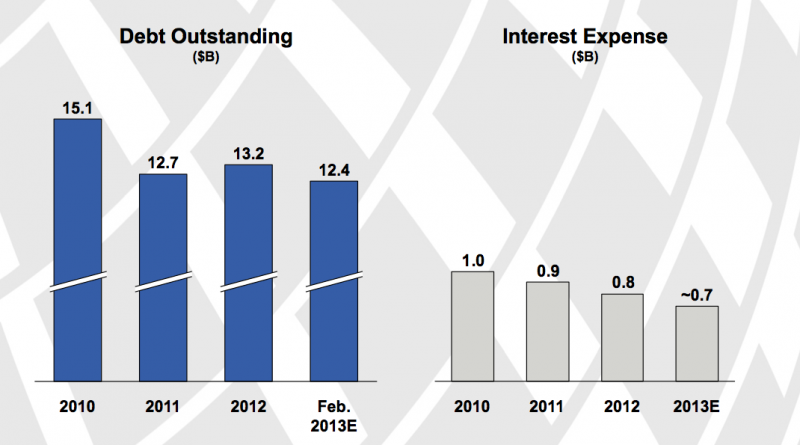 Delta has also achieved equilibrium between its capital expenditures and free cash flow, reversing a historical trend of capex outpacing cash generation. Delta during the last few years has kept its capital spend between USD1 billion and USD2 billion, compared with nearly USD5 billion in 2000.

The roots of change began in 2007, and now during 2013 Delta’s board is taking a decision on how exactly to return some of that cash to shareholders, which is almost unheard of in the airline industry. 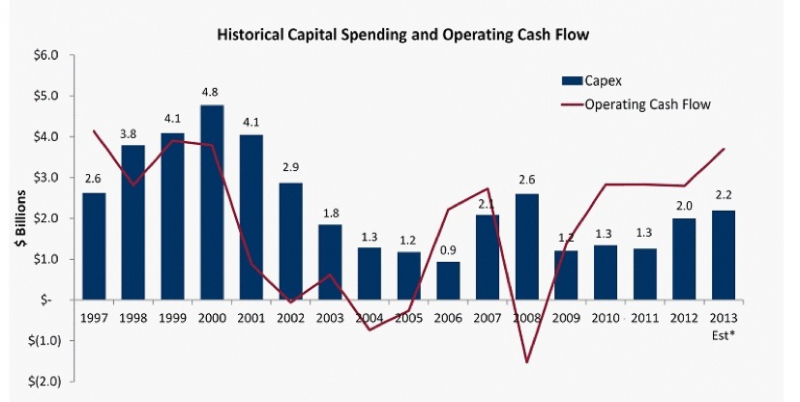 All of the positive movement results from a mindset change among management teams at the large US airlines, who firmly believe continued capacity rationalisation and prudent capital expenditure and debt management are the keys to convincing investors the US airline industry is an entirely different entity from 10 years ago.

“This is an industry that has been very fragmented, or put another way, there have been too many business plans chasing too few customers and that’s been unhealthy for everybody,” declared United CEO Jeff Smisek in Mar-2013. “The days of larger-than-life market-share driven managements are over in this business...we are focussed on providing appropriate returns for our shareholders.”

Mr Smisek’s remarks are part of a cohesive message that executives are continually stressing to investors. Doug Parker, current CEO of US Airways and the soon-to-be chief of the “new” American Airlines remarked his hope is that now when airlines are asked how they intend to deploy free cash flow the answer is not to purchase more aircraft. The previous effects from that mentality was that “all of a sudden...you have too many airplanes and you’re not making money anymore”.

Mr Parker believes the US industry is reaching a level of maturity where there is a lot of cash “left over for investment”.

And government still sees the industry as a tax milk-cow

As with fuel prices, the biggest risks to airlines are the ones over which there can be no control.  Fuel is not the only one. Despite continued rational behaviour by carriers in the US market place, and their ability to turn profits even as fuel remains stubbornly high, another significant uncontrollable variable threatens to derail the progress airlines have made in creating a viable business – government intervention.

A4A estimates that the percentage of airfares allotted for government taxes has jumped from 7% in 1972 to 20% in 2013.

The tax burden could likely increase as the US Senate recently passed a budget resolution that doubles the Transportation Security Administration (TSA) tax to USD5 per trip (a proposal previously floated by the administration of President Obama during 2011) and USD7.50 per one-way trip by 2017. The US House of Representatives has introduced a similar proposal.

If the US Congress approves the change, it would add to the nearly USD19 billion that the US Federal Government collected from airlines and taxpayers during 2012.

A4A estimates the Senate’s proposal would cost airlines and travellers roughly USD2.5 billion annually during the next 10 years. This is a theme that the lobby has pushed for some years, to little effect; sadly, the new-found profitability of the industry only seems to increase the appetite to tax.

A4A has been lobbying intensely for a national airline policy during the last couple of years, but the US Government apparently considers the aviation industry is a well it can tap to smooth out deficits in other areas. A big challenge US airlines (and their European counterparts) face is the competition from emerging markets, particularly the Middle East, where government support of airlines and airports is often more robust. Airlines in both the US and Europe have been constantly attempting to educate their respective governments about these competitive threats during the last few years, but so far governments have been unconvinced, as evidenced by Germany’s air passenger tax and the UK’s air passenger duty fees.

Meanwhile too, those same governments have allowed infrastructure adequacy to decline in ways that only add further costs to the industry - notably in under-investment in airport and airways facilities, leading to massive congestion costs.

Challenges remain for US airlines to reach investment grade status

As fuel prices continue to hover around USD100 per barrel and government taxation remains a constant, US carriers still face some hurdles in attaining true investment grade status even as their turnaround during the last few years has been impressive.

US airline net income and margins versus Ford, Starbucks and Apple: 2012

While US airlines have restored their businesses to a level of health unimaginable in the early 2000s, the reality is the airline business still produces paltry margins compared to the industries – evidenced by 0.1% margin recorded by US carriers during 2012 compared with a 10.5% margin recorded by Starbucks, Ford’s 4.22% margin and Apple’s net margin of 25.35%

The capital intensive nature of the airline business may never lend itself to reaching the margins of Apple, but the relatively short trajectory during the last few years to finally arriving at a point where US carriers can meaningfully assess how to reward shareholders is impressive.

That this is long overdue is obvious, but it is hard to escape the conclusion that these same airlines have in many cases achieved their low levels of profitability largely thanks to their own inept management. Some investors have long memories, causing a level of wariness when they now see the pumpkin apparently turning into a gilded coach.

While current and would-be investors are right to strike a cautious tone with respect to a new paradigm of discipline within the US airline business; this time, carriers seem to have forged a clear path to break the boom-and-bust cycle that has plagued the industry for decades. At least for a couple of years.

Hopefully they are more concentrated on keeping their own businesses in order than relying on government to reduce, or even maintain current levels of taxation and regulation - because history suggests there will be little relief to be had there.