IATA recently raised its 2013 net profit forecast from USD8.4 billion to USD10.6 billion. Although the outlook for fuel prices has increased since its previous forecast in Dec-2012, so have its passenger and cargo traffic and yield forecasts. IATA’s forecast 2013 EBIT margin of 3.3% would be above mid-cycle, but below historic peaks. IATA releases contain other data with some interesting home truths.

Since the last aggregate net loss in 2009, the industry tightly controlled non-fuel costs, but fuel cost increases have eroded almost all the gains. Moreover, in spite of greater consolidation, real pricing power is still elusive. 2012’s net profit is equivalent to the price of an espresso coffee for each passenger, a pittance compared with the capital invested in the industry and its future investment needs. The ongoing failure of this economically vital sector to cover its cost of capital is a conundrum that cannot continue indefinitely.

Only full global liberalisation of controls on market access and ownership are likely to resolve it and that might require a lot more espressos.

IATA recently raised its profit forecasts for the world airline industry in 2013 from a net profit of USD8.4 billion (forecast in Dec-2012) to USD10.6 billion. Its operating margin forecast is up by 0.4ppts to 3.3% of revenues. Although fuel costs are now forecast to be higher, this is more than offset by a higher revenue forecast driven by a modestly better global economic outlook.

Risks remain, not least the stability of the eurozone, as illustrated by the banking crisis in Cyprus, and forecast margins remain below historic peaks, but IATA’s forecasts suggest the industry is above mid-cycle.

Both passenger and cargo traffic and yield forecasts increased, based on improving global GDP growth outlook

The key changes to the revenue drivers in IATA’s Mar-2013 forecast compared with its Dec-2012 forecast are shown in the table below. A slightly higher global GDP growth forecast helps to drive higher growth in both passenger and cargo traffic and ongoing capacity discipline nudges up the load factor forecast. Passenger yields are also forecast a little higher than previously, a result of higher demand, capacity constraint and better cabin mix (see below).

Changes in the key revenue drivers in the forecast for 2013

Recent traffic trends for January were distorted by the timing of the Chinese New Year holiday, which fell in Feb-2013, but in Jan-2012. After seasonal adjustments, passenger traffic volumes remain on an upward path, while cargo traffic is on a plateau. However, business confidence indicators suggest that the outlook for air cargo may be more positive in the months ahead.

Air freight volumes are closely linked to international trade in goods, which has risen by 15% since 2008 in emerging economies, but fallen by 5% in advanced economies and the former will remain key to the cargo traffic recovery. IATA’s forecast improvements for cargo traffic and yield are greater than for passenger traffic and yield, but cargo still has a lot of catching up to do. 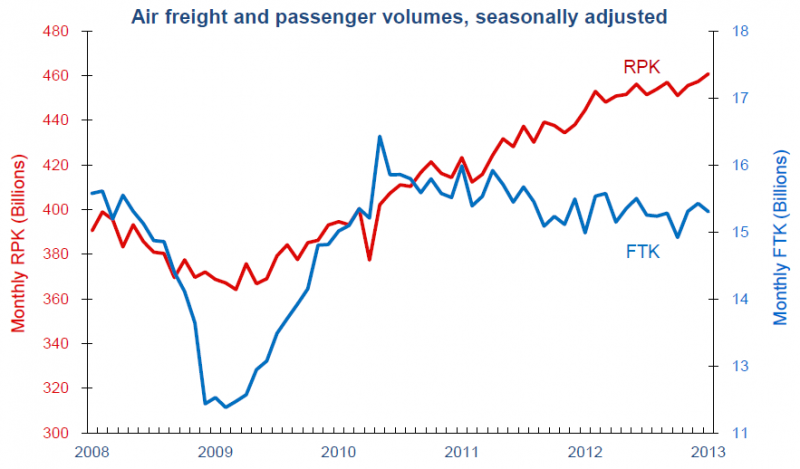 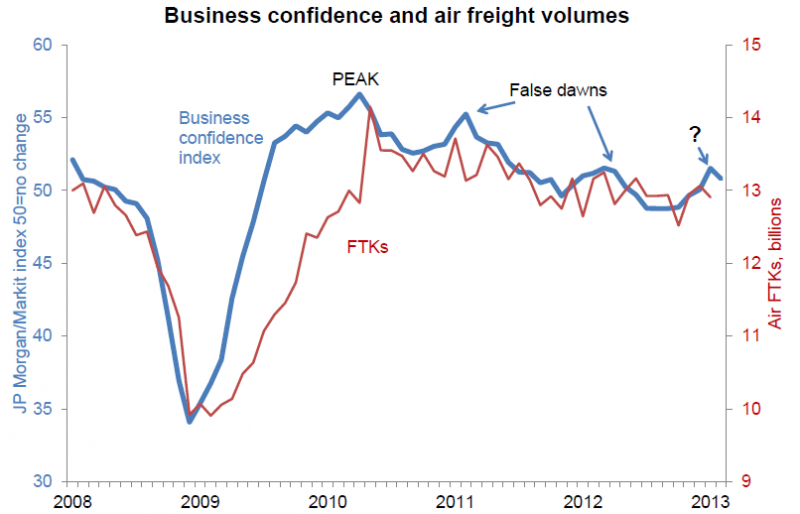 Recent IATA data support its optimism on the yield outlook, as yields for US carriers have started to track upwards in recent months, the result of consolidation and capacity discipline. Worldwide airfares have been increasing in local currency terms. 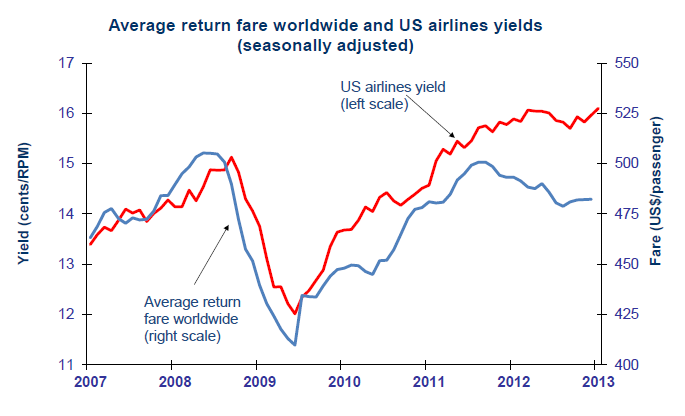 IATA financial forecasts as of Mar-2013

IATA’s 2013 forecast published in Mar-2013 sees revenues higher by USD12 billion (1.7%) than its Dec-2012 forecast, driven by higher traffic volumes and yields as noted above. It also forecasts operating costs higher by USD9 billion (1.4%), with fuel accounting for USD6 billion of the increase due to higher crude oil and jet fuel prices. Non-fuel costs are forecast only USD3 billion higher than in the previous forecast, reflecting the industry’s current focus on controlling these costs.

IATA’s latest forecast of net profit is 26% higher than its previous forecast, but the increase represents only 0.3% of industry revenues and the forecast net profit margin is still only 1.6%. When margins are so slim, it only takes small changes in revenues and/or costs to drive high percentage changes in profits.

Changes in the IATA financial forecasts for 2013

Cargo asset utilisation continues to under-perform. What future for freighters?

The divergence between the passenger and cargo businesses is further highlighted by comparing load factors and daily utilisation rates. Cargo load factor was 41.9% in Jan-2013 and 45.0% for the whole of 2012, while the corresponding passenger figures were 77.1% and 79.1% respectively. 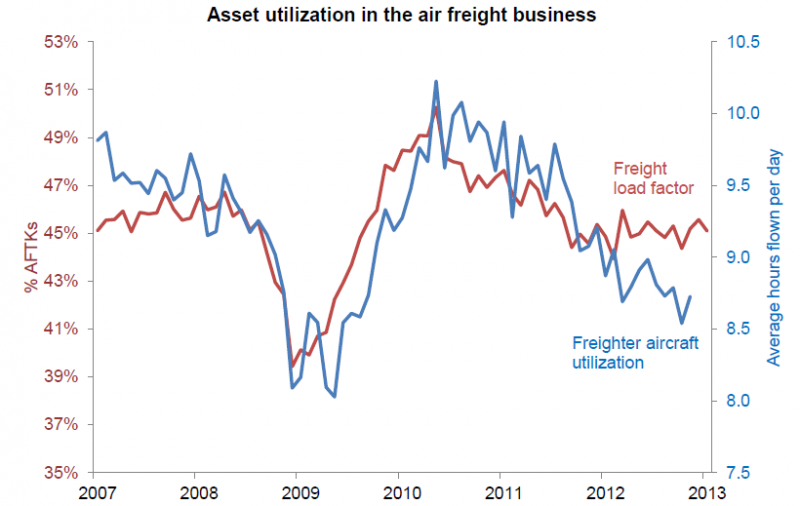 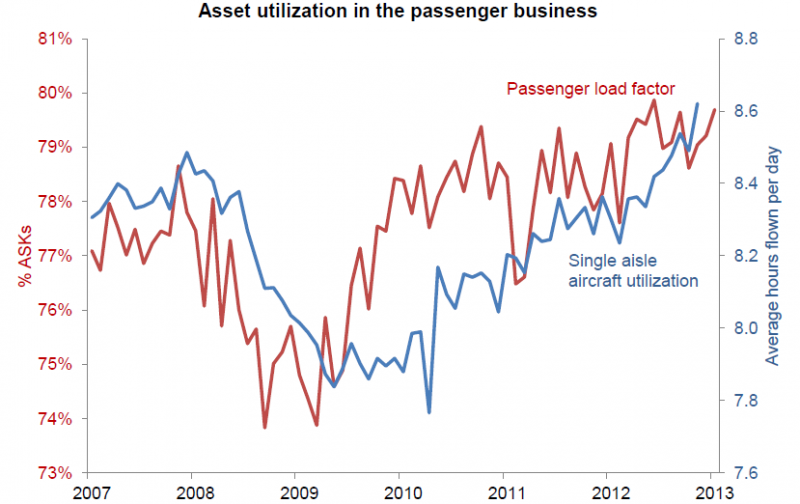 Strong control over non-fuel costs, but fuel cost increases take back the gains

According to IATA’s forecast, non-fuel costs will account for just below 65% of revenues in 2013. This has fallen from more than 73% in 2009, the last year in which the industry posted a collective net loss and reflects an impressive focus on cost control.

Unfortunately, fuel costs have grown by 73% to eat up 32% of revenues (up from 26% of revenues in 2009). This has meant that total costs are up by 37% over the period, leaving only a small profit margin as a reward for the airlines’ good work on revenues and non-fuel costs.

The industry has made progress on fuel efficiency too, limiting the fuel cost increase to 73% in spite of an 83% increase in jet fuel prices from 2009 to 2013F.

Fuel efficiency remains a long term theme for the airline industry, having improved steadily over many years. In addition to the obvious cost benefits, this brings environmental and public perception-related benefits. Indeed, the airline industry has improved its offer in a number of ways, as the chart below illustrates. Not only is it more fuel efficient, but also it is safer and air fares are lower in real terms than in 1990. The decline in real air fares has levelled out since the mid 2000s, but it remains a tough industry in which to gain real traction on pricing power improvements.

Perhaps the trends towards consolidation, both in terms of full mergers and of deepening alliances between airlines, is having a positive impact as seen in the more stable air fares curve. 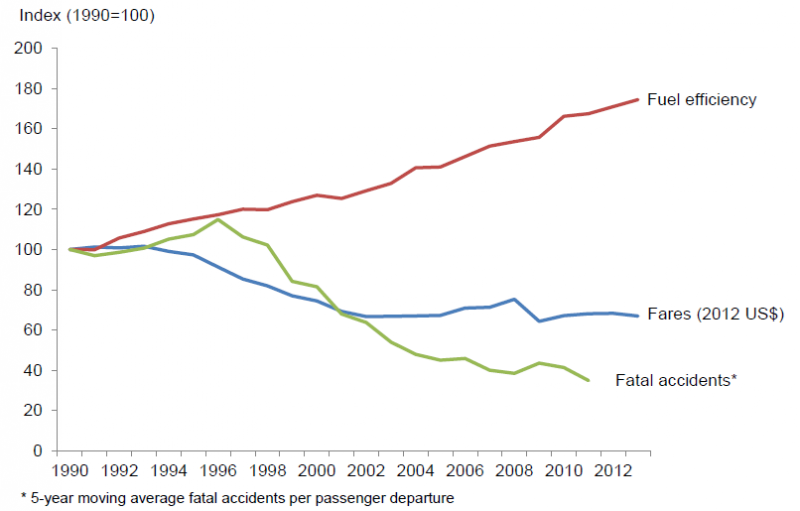 As noted earlier, margins remain very thin for the global airline industry. In 2012, the average revenue per departing passenger was USD214.64 and the average cost (including interest costs) was USD212.04, leaving airlines with an average net profit per passenger of only USD2.56, roughly the price of an espresso coffee.

And this was one of the better years. 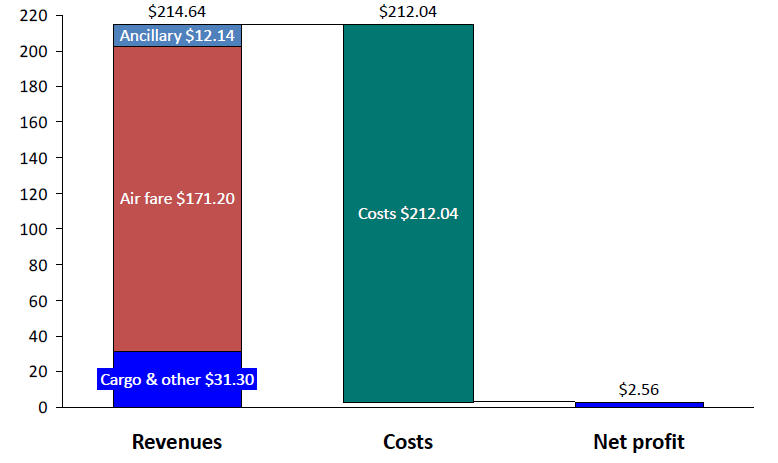 2013F EBIT margin above mid-cycle, but below historic peaks

Even at cyclical peaks, these margins remain insufficient for the world’s airlines in aggregate to generate a sufficient return on capital to cover their average cost of capital. 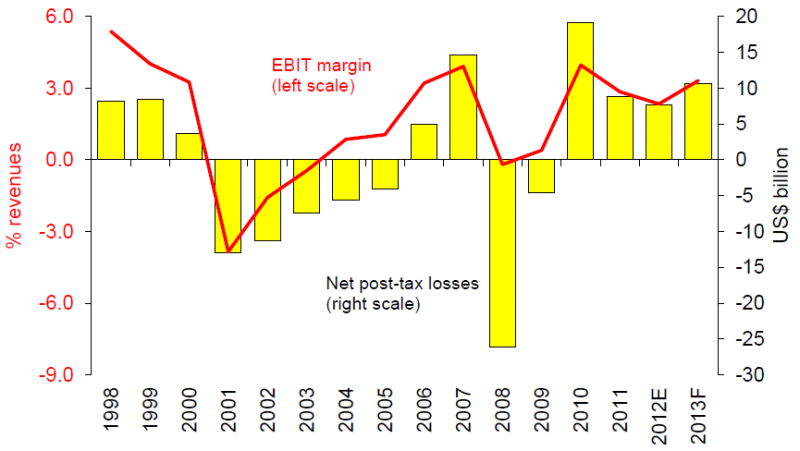 IATA puts the cost of capital at around 7% and calculates the industry’s return on capital is below 5% in 2013, the gap representing a destruction of value for those investing in airlines.

Indeed, the industry has almost never generated a return on capital of 7% and averages somewhere around 3%.

Therein lies a conundrum. If the cost of capital is defined as the return required by investors, surely the ongoing existence of the airline industry and the fact that it attracts new investment every year is de facto evidence that its investors are receiving the return they require. If this were not the case, investors would have long ago abandoned the sector. 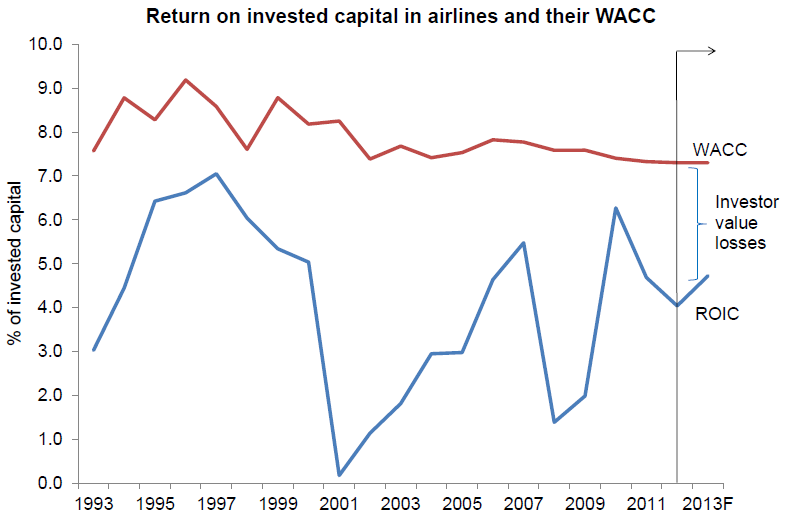 Not all investors require the same return, for now

The apparent contradiction is partly resolved by noting that there are different types of investor with different aims and required returns. Those investing for purely financial/commercial reasons demand a return in line with market benchmarks – somewhere in the 7% region suggested by IATA.

However, governments and other public sector investors in airlines may be prepared to accept a low financial return as they believe that airlines are a public good, bring wider economic and social benefits. Indeed, it is difficult to imagine any modern economy functioning, or any other industry sector managing to cover its cost of capital, without air travel.

There are also private airline owners with wider business interests for whom the airline may bring benefits in terms of branding, prestige or other benefits that are not purely financial on a stand-alone basis.

However, in a world where economic austerity looks likely to remain a feature for some time, governments and other non-financial investors cannot afford to accept low returns forever.

The pressure for all airlines to generate an economic return is bound to increase. Of course this means even greater efforts to control costs and capacity, but it will also require further liberalisation of restrictions on ownership and market access in the global airline industry.

Only full liberalisation in these areas can lead to a truly global market in which the more efficient operators can enter new markets and drive consolidation through cross-border mergers.