A beleaguered United Airlines has outlined ambitious goals for its investors that entails an annual cost cutting scheme of USD2 billion and a pledge to begin returning cash to shareholders by 2015.

After battling operational, revenue and cost challenges during the last couple of years, United has no choice but to crystallise a plan to improve its performance in the medium term. Its target of rewarding shareholders is likely to be a competitive response to Delta Air Lines, who recently outlined plans to return USD1 billion to its shareholders during the next three years.

Additionally, United believes it can increase pre-tax earnings by two to four times during the next four years. Taken together it is tall order for a company that is still trying to deliver on its merger synergy targets. Now that United has declared those goals, the challenge is to deliver a successful execution, something that sceptics might have a right to be weary of.

In order to reach its goals of up to a four times increase in pre-tax earnings by 2017, United will continue to practice what it deems as industry leading capacity discipline, network optimisation with an underlying goal to further leverage connecting traffic and improving its management of ancillary revenues to meet another ambitious target of boosting non-ticket revenue by USD700 million in order to produce USD3.5 billion in annual ancillary revenues by 2017.

United during the past few years had worked toward keeping its capacity below USD GDP growth to sustain an adequate supply-demand balance. During the next four years it plans to continue that strategy, keeping its growth at a 1% to 2% annual clip.

The carrier plans to achieve its capacity growth through 2014 even as its overall fleet (mainline and regional) remains flat at 1,250 to 1,300 aircraft. The addition of more seating on existing aircraft and the upgauging of its regional aircraft fleet are the drivers in allowing United to slightly increase its supply while sustaining current fleeting levels. During the next two years, United will add higher-gauge 75-seat Embraer 175s as it works to reduce its exposure to the unpopular 50-seat jets. A collective bargaining agreement United reached with its pilots during 2012 allows for a maximum of 255 70-plus seat jets (including Bombardier Q400 turboprops). Once the 70 Embraer 175s are added to its fleet, United will reach that threshold.

Despite numerous developmental delays and in-service challenges, United has remained one of the most ardent supporters of the Boeing 787 and the aircraft’s potential in mining new revenue opportunities.

Carrier chief revenue officer Jim Compton recently told investors the new Denver-Tokyo route that debuted in Jun-2013 has been profitable since launch, and deploying the new widebody between Houston and Lagos (which had to be launched with the 777 due to delivery delays) has allowed the carrier to right size the aircraft for that market. Mr Compton also stressed that markets like Tokyo-Denver would not be viable except for the 787.

The focus on hub connections is reflected in United's decision to axe Seattle-Tokyo service and add a second daily Houston-Tokyo flight. Similar to Delta, United seems to be de-emphasising stop-over service in Tokyo as it plans to downgauge Tokyo-Seoul and cut flights from Tokyo to Bangkok. The elimination of Seattle-Tokyo is no great shock given Delta’s quick build-up of Seattle as an Asian gateway that includes service to both Narita and Haneda. Since Seattle is not a hub for United, connection opportunities for long-haul flights are minimal, with Delta and Alaska capturing the lion’s share of connecting passengers for trans-Pacific service.

United believes it can rely more heavily on its trans-Pacific joint venture partner ANA to preserve connectivity through Tokyo and redeploy the aircraft exiting the intra-Asia markets connecting through Tokyo elsewhere. It plans to introduce new seasonal service from Houston to Munich (a hub of its trans-Atlantic joint venture partner Lufthansa), between Washington Dulles and Madrid and Chicago to Edinburgh.

United plans to leverage technology to generate USD700 million in additional ancillary revenue through a recently updated mobile platform and a website refresh to basically sell the right products as the right time. A prime opportunity lies within United’s mobile application as it estimates 94% of users revisit the application after download, versus a 90% average of users who delete most apps within two uses.

The technology upgrades should allow United to execute the next phase of ancillary revenue management in the airline business – pricing to high and low periods of demand rather than keeping prices static. Adding some nuance to its revenue management of its Premium Economy offering allows the carrier to set price points by specific seats and rows. For example, a middle seat has a lower price that a more attractive window or aisle seat.

There are four tiers to United’s goal of achieving an annual USD2 billion cost reduction – a USD1 billion reduction in fuel consumption through the introduction of younger aircraft and winglet installations, USD100 million in maintenance improvements, the slashing of USD150 million in sourcing costs and a USD100 million decrease in distribution costs.

United CFO John Rainey remarked that since the United-Continental merger in 2010 productivity has declined each successive year, but that should begin to improve in 4Q2013 and reach a 15% to 20% improvement by 2017. Interestingly, no mention was made of joint collective bargaining agreements contributing to improved productivity, but it is hoped there are some opportunities for productivity improvements within the contracts the carrier has forged with its pilots, storekeepers and passenger and fleet service employees.

The savings associated with United’s targeted cost reductions goals are also coinciding with an attempt by the carrier to flatten out its capital expenditures as Mr Rainey explained that “inconsistent” capex can create challenges in managing debt levels. United’s mainline fleet plan during the next few years is to add on average 25 replacement aircraft per year, with higher than average additions in 2014 and 2015.

Mr Rainey also highlighted that United has opted to make upgrades to its 152 Airbus A319 and A320 narrowbodies (slimline seats, larger bins), which should defer USD3 billion in capital expenditures versus a modest investment for the upgrades of a couple of hundred million.

United is embarking on a shift in its cash flow strategy, as Mr Rainey explained the carrier has been using its cash flow to pay down high coupon debt and product investment as the merged airline had to catch up after a long period of underinvestment. Now the carrier is working toward returning cash to its shareholders beginning in 2015 with an eventual aspirational goal a 50% return of free cash flow to shareholders, said Mr Rainey. That target, of course, if far off on the horizon, as Mr Rainey remarked United clearly needed to walk before it can run to shareholder rewards.

United also has a targeted outstanding debt level of USD15 billion (including aircraft rent) by 2017. But it believes it can maintain that debt load, which includes aircraft financing, and begin to return cash to shareholders in the next two years.

Mr Rainey concluded that P/E ratios of the airline industry, and also United, as compared with other industries do not reflect the stabilisation that has occurred during the past few years as carriers have worked to de-lever their balance sheets (United estimates debt payments of USD2.3 billion in 2013), maintain capacity discipline and shore-up liquidity.

United's P/E ratios versus other industries 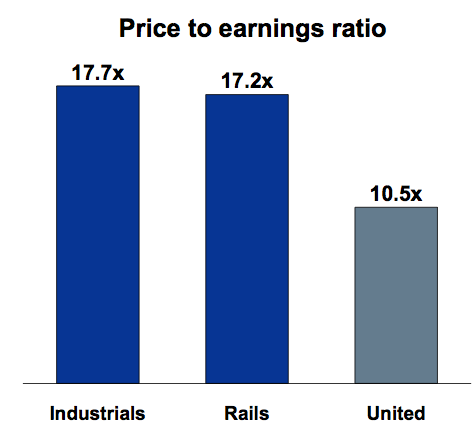 United is undertaking formidable cost-cutting and revenue generating challenges as it still continues to battle a weaker unit revenue performance relative to the industry and works to reach merger synergies three years after the close of the deal. Given the tough times United has encountered during the past couple of years, it would be wise to view its latest declaration of goals with some caution. If the carrier fails to meet any of the goals within the set timeframe – especially the return to shareholders – investor and passenger confidence will continue to diminish.