In this third and final part on the growth of Taiwan’s TransAsia, the carrier sees great potential for cross-Strait traffic once restrictions are loosened: governments have opened more cities that can be linked, but these are smaller and difficult to maintain a sustainable service. Even if greater access at primary cities were offered, obtaining slots is a challenge.

Once ETOPS is secured around 2015, this may pave the way for TransAsia’s A330s to launch intercontinental services, but before then the carrier is considering how it can grow outside its Taipei hub by using liberal traffic rights in Macau, Japan or Thailand, possibly in conjunction with its growing branch offices. TransAsia would be open to gaining overseas scale by working with local airlines – but airlines around Asia have not shown themselves to be eager to enter into strategic partnerships.

And meanwhile the invasion of low-cost operators is quietly growing, largely under the noses of the incumbent Taiwanese airlines.

The opening in 2008 of regular cross-Strait flights between Taiwan and mainland China has proved a bonanza for airlines, TransAsia included: one-third of its revenue (and a higher proportion of profits) is derived from cross-Strait services, a market that did not exist five years ago.

But the market has reached a point where carriers want to see more focused growth. Flights are still heavily regulated – exact city-pairs are awarded to airlines – so growth potential remains. But Taiwanese carriers especially want to grow on trunk routes, such as from Taipei to Beijing, Guangzhou and Shanghai but the lack of daytime slots makes that prohibitive (although handfuls of slots at the airports are opened up, they primarily go to domestic operators).

In the latest cross-Strait expansion agreement that boosted weekly flights on each side from 558 to 616, eight mainland Chinese cities and one Taiwanese were opened. But this is not piquing the interest of TransAsia as demand at many of these cities is currently weak and presents overhead costs of opening a new city rather than gaining scale by expanding an existing destination.

Some cities TransAsia may only serve from secondary Taiwanese cities. Its regional network is served exclusively from Taipei, with the exception of two daily Macau services from Kaohsiung and a daily from Taichung. Macau is served three times daily from Taipei. Cross-Strait flights are served from many Taiwanese airports. While there is some demand for mainland visitors to fly into other parts of Taiwan besides Taipei, the routes outside Taipei are largely a result of what TransAsia is allocated. 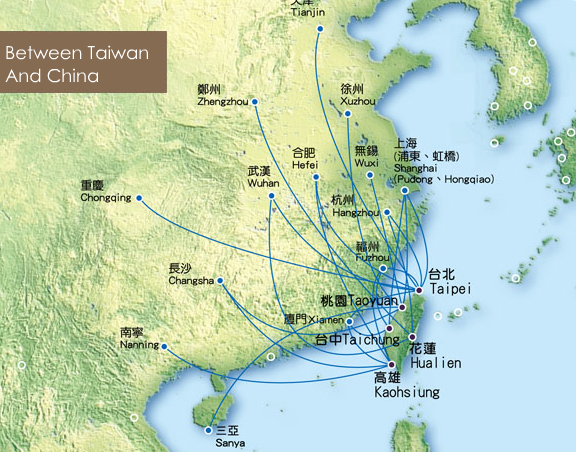 “Unless we’re able to get more routes or frequencies into existing cities that we operate, for us to be picking new cities to expand that ‘network’, sometimes I think it’s unnecessary,” TransAsia chairman Vincent Lin said. TransAsia serves Shanghai from Taipei six times a week, but with a disjointed schedule because those six services are between Taipei’s two airports and Shanghai’s two airports. Tianjin (somewhat of an alternative to Beijing, which TransAsia does not serve) is limited to two flights a week.

Slots are also hard to obtain at Hangzhou and TransAsia serves the city four times a week (Hangzhou has its own catchment area but has a fast high speed rail link to Shanghai which can also be something of an alternative). TransAsia's presence at other mainland Chinese cities can be sparse: Chongqing and Hefei are served twice a week, and Nanning just once a week.

TransAsia’s lukewarm attitude to operating the smaller markets is largely echoed by domestic peers China Airlines and EVA Air. While Chinese carriers pushed for greater cross-Strait liberalisation, the Taiwanese government side is understood to be holding back. This is a result of the lack of slots but also a fear of being over-run by much larger, and more numerous, Chinese carriers, even though Taiwanese carriers accounted for 55% of seat capacity and mainland Chinese carriers the remaining 45% in Dec-2012 (a reflection of China Airlines and EVA Air using more and bigger widebodies than mainland Chinese peers). TransAsia has publicly bemoaned how it receives secondary route allocations compared to government-owned China Airlines and the more established EVA Air, part of the influential Evergreen Group. As it works on this organic growth, it will also face challenges in strategic growth following a cooperation agreement in early 2013 between the SkyTeam members in mainland China and Taiwan (China Airlines, China Eastern, China Southern and Xiamen Airlines). Those carriers account for about 43% of the cross-Strait market and seek to deliver greater scale by cooperating with each other. This is scarcely the sort of cooperation that would be permitted in a tougher regime of competition law, but that is a reality of life for the outsider airlines.

TransAsia' Mr Lin is usually talkative and open, but is quick to decline to say how TransAsia might respond to this nascent but important alliance.

Although the cross-Strait market has much potential and carriers have re-directed capacity, and added aircraft, to support growth, TransAsia is mindful of not putting all its eggs in one basket as the market remains highly political and has expanded largely as a result of Taiwan’s government favouring ties with Beijing to reap economic benefits – even if there are disagreements about each claiming to be “China”. The re-election in 2012 of the pro-Beijing Taiwanese government ensures continued growth in the short-term, but TransAsia is mindful of long-term scenarios.

“Geopolitical transitions can have a huge impact on how this entire market looks like. That’s part of the reason we have been expanding more on international routes. You never know if one day China decides it will shut down to Taiwan or Taiwan decides it will shutdown to China,” observed Mr Lin.

Further liberalisation and opportunity for TransAsia will present itself when Taiwanese carriers are able to carry sixth freedom traffic out of China, allowing TransAsia to place mainland passengers on connecting flights to Northeast and Southeast Asia. This is however something about which Beijing is very mindful and route grants are made with one eye on preventing this sort of traffic leakage.

A330s could be used on intercontinental services around 2015

TransAsia’s two A330s, the first delivered in Nov-2012, are being deployed on regional routes as much a function of opportunity as necessity. TransAsia expects to receive basic ETOPS for the aircraft in 2014 and an extension in 2015 that will enable the carrier to consider intercontinental services.

According to local press, TransAsia has mooted a number of potential markets including Australia, New Zealand and the Middle East, but clarifies that while it is too early for it to think about details, Australia and New Zealand are now ruled out. Services could be from Taipei or another country depending on air traffic rights (Taiwanese carriers hold fifth freedom rights from Thailand) as well as the development of TransAsia’s branch company strategy.

Intercontinental deployment would make better use of the A330’s premium configuration of personal TV screens at every seat and angled lie-flat seats in business class. While the product may be overly generous for the A330’s current regional deployment, eventual expansion to intercontinental markets would avoid costly retrofits. TransAsia would likely add A330s or A350s, and the carrier has not ruled out the A380, but notes its prospects are some years away for the carrier’s needs.

TransAsia is considering a number of growth opportunities outside its Taiwan home, particularly keen on securing additional traffic rights from Macau that would enable the Special Administrative Region to act as a mini hub for TransAsia’s mainland China presence the way Hong Kong has for other carriers. Flag carrier Air Macau however has a (largely unexploited) local monopoly for the medium-term, which has resulted in stagnating growth, although there are signs of expansion strategy there.

TransAsia would deploy additional capacity into Macau and with a bigger offering if TransAsia could secure fifth freedom rights. Growth could also occur from branch companies. Initially TransAsia is establishing branch companies to hire locally and avoid sending Taipei head office staff to foreign locations on expat contracts, but Mr Lin is eager to see the strategy evolve. Ultimately TransAsia envisions securing local air traffic rights, but in the absence of permission under the bilateral with Taiwan, TransAsia would have to convert a branch office into a JV partnership in order to achieve a local AOC – a convoluted process TransAsia is unlikely to undertake; it would favour liberalisation as well as partnerships with local airlines.

Mr Lin singles out Singapore Airlines and Thai Airways as potential partners, but both Star Alliance carriers have a relatively independent approach to partnerships, and Singapore Airlines especially tends not to partner with carriers that have (competing) capacity into its home hub. TransAsia’s point of differentiation from unsuccessful partner pitches is to be “friendlier” towards local incumbents, a nicety that is unlikely to curry great favour in the short term.

Growth is occurring with modest profits

TransAsia is profitable but the carrier’s profits declined in 2011 and 2012 despite expansion and revenue increases. TransAsia expects 2013 revenue and profits to be higher.

Mr Lin, 39, is the oldest son of the family that owns the Goldsun Group and was brought in to TransAsia in 2010 when the family decided they wanted greater day-to-day influence; previously management had effectively been outsourced.

Mr Lin admits he never thought about running an airline and that he is “still on the learning curve”. He brings a strong business background and is focused on the need for TransAsia to be agile and respond to changing conditions, a consistent theme for him.

These next few years promise unprecedented change in Asia and Taiwan specifically. Mr Lin has surrounded himself with managers who are versed in airline operations, but they come from legacy backgrounds. There may be contention if the fast-moving Mr Lin outpaces the comfort zones of his managers.

The airline finds itself faced with a series of difficult decisions. Like it or not, the sleepy northeast corner of Asia (in terms of competitive new entry) is about to be invaded by low-cost airline operations. A recently concluded open skies agreement with Japan promises great opportunities for new entry, particularly between regional gateways – which can only be effectively serviced with a much lower cost and lower priced airline model. Jetstar, AirAsia and others are increasingly exploiting these prospects. And the array of regional airports available for operations in China will be a tempting proposition for would-be LCCs to operate, able to stimulate new business with the attraction of low fares. There are still some hurdles here; for example China still limits frequencies, preventing daily operations often needed for commercial viability. But that is changing too.

Meanwhile, the Taiwanese airlines are mostly sitting comfortably on higher yields more suited to their higher cost and mainly legacy attitudes, in a steady growth market. To risk undermining this relatively safe position is perceived as a danger in the first place; but being able to adapt to finding an appropriate model to compete in a new market environment is an even greater challenge. Low-cost airline thinking is still not on the radar for the three main Taiwanese airlines.

The outcome will be to concede most of these new entry opportunities to foreign LCCs. That will not be so painful for the incumbents if they are able to maintain a barrier between these new entrants and the protected main city pairs, but it does mean that when the established airlines finally come to the recognition of the market potential in this emerging sector they will be starting from a position of weakness, rather than being able to leverage their existing power.