Azul Linhas Aereas SA confirmed that US fund, Texas Pacific Group (TPG) had acquired a 10% stake in the LCC. According to reports in Valor Economico, TPG will pay approximately USD20 million for the stake, but will not inject additional funds into the carrier (the TPG investment was reportedly facilitated as Pequot Capital and Wexford Capital sold shares in the carrier. Pequot still remains a shareholder in the LCC).

Azul, which launched with start-up capital of USD200 million, carried more than 2 million passengers in its first 12 months of operations (to Dec-2009). In an interview with CNBC on 22-Jan-2010, Azul founder and Chairman, David Neeleman, stated the carrier has “plenty of money” and is cashflow positive. The carrier expects to become profitable in 2010.

Also in the Americas, WestJet’s VP Operations, Gregg Saretsky, stated that while the carrier is encouraged by early signs of an economic recovery and “buoyancy” of traffic, caution remains a key component to the Canadian LCC’s strategy.

In the Asia Pacific, shares in AirAsia slipped 2.2% on Friday. On Saturday, CEO of the carrier’s low-cost long-haul arm, AirAsia X, stated its unit cost for 2009 was USD 2.7 cents per ASK including fuel. The CEO added the carrier expects to report a “modest profit” in 2009 despite a “very difficult year”.

This contrasts with comments by Singapore Airlines CEO, Chew Choon Seng, made a day earlier, in which the CEO questioned the long term viability of LCCs operating on long-haul routes. Mr Chew stated it is unlikely the carriers will be able to remain competitive on a unit-cost basis compared to full service carriers, adding Singapore Airlines is able to produce better economies of scale through its mix of traffic and cargo. 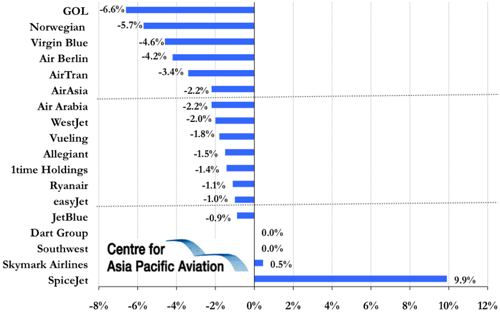 Tiger Airways shares were listed on 22-Jan-2010. Daily share price movements will be available from 23-Jan-2010.