NB: This is an extract from a detailed article on Tiger's IPO to be published in this week's edition of Peanuts! Weekly - the only report dedicated to global LCC analysis.

Most of the capital raised in the IPO (SGD166 million) will be allocated to funding new aircraft for subsidiaries, Tiger Airways and Tiger Airways Australia. A further SGD50 million will go to pay down short term loans. According to the IPO Prospectus, “our net proceeds from the Offering (will go) to fund the equity portion of our planned acquisition of Airbus A320 aircraft and the associated aircraft pre-delivery payments.” In effect, SGD1.38 of the share issue price will go to bolster the company’s balance sheet. The IPO outcome places Tiger in a much healthier credit position, with plans for a fleet of 68 aircraft in all by Dec-2015.

Aiming for a slice of the fast expanding southeast Asian market and to expand market share in the (low growth) Australian market, Tiger last week announced it is stepping up the challenge by bringing forward the delivery of five A320s for this year and next. The delivery dates were previously planned for 2016.

Of the offering, just under 153 million shares were directed to international and institutional investors, with only 12.4 million for the domestic Singapore market. The Singapore allocation was oversubscribed by a factor of 21 times, while the international shares attracted an oversubscription of 4.5 times. A total of 943.7 million share applications were made.

The result has to be considered a success in the face of considerable industry doubt about the wisdom of going to the market at this time. It will undoubtedly interest others who have been considering issuances or an IPO.

But it is not insignificant in Tiger’s case that it has the backing of the Singapore government, which, through a subsidiary of its investment arm, Temasek and Singapore Airlines, will retain a large majority of the shareholding in the LCC. That family feeling will necessarily offer comfort for other shareholders, rightly or wrongly.

Getting the timing right; of luck and judgment

Timing in aviation, like most things in life, is the key to success. A lot of that is down to luck. Matters within the control of management do not so much concern luck as good judgment; the corporate concept has to be well formulated in the first place and its implementation has to be immaculate.

For the IPO, like the airline’s startup, the timing was not ideal (although the outcome was a lot better than it might have been). It was certainly a lot better than this time last year. But probably not as good as it will in Jan-2011. That is what most of its investors will be betting on, the hope of an upside.

Tiger has not been blessed with a lot of luck so far, but it is a fairly hardy animal on the other scores. And establishing a healthier balance sheet now will undoubtedly reduce the future exposure to chance. It now has to deliver.

The beginnings: capital has been needed, but now in front in Singapore

The golden age for LCC startups in Asia Pacific was between 2000 and 2004: there were plenty of cheap aircraft, pilots and other skilled resources, fuel was cheap, credit was easy and there were soft new markets to plunder. Tiger arrived late on the scene in those terms, after others had established their positions and as cost pressures were heading upwards. In its target markets, Virgin Blue, AirAsia and Jetstar were already well along the track in their respective spheres.

So its initial timing was not ideal, but it did make it onto the scene before the hurdles to entry got higher. That in itself was a help, as the new hurdles limited other new competition. Singapore Airlines had not been keen to enter the low cost market with its own subsidiary – it already had SilkAir, which continues to operate successfully, covering much of the discretionary market and feeding SIA. Eventually, the flag carrier made the move, apparently tentatively and arguably from its own point of view, sub-optimally. And the Singapore market was already crowded; Jetstar Asia and Valuair, subsequently combined, were challenging a space that Tiger needed to be in.

As the IPO Prospectus notes, Tiger however turned positive, more slowly than most, a reflection of the airline’s late arrival on the scene: “We launched Tiger Airways Singapore in September 2004, and it achieved profitability in its third full year of operations (fiscal year 2008) and has reported annual profits since. We launched Tiger Airways Australia in November 2007 and it has grown rapidly to establish itself as a major domestic airline in Australia, flying to every state and territory in the country.”

Profitability is not yet imminent for Tiger Australia in the Australian market though.

Tiger’s strongest argument in support of its relatively bullish outlook is the Boeing forecast of compound annual growth at 8.1% between 2008 and 2028 in southeast Asia (following a rate of 6.7% annually between 1985 and 2008). Partial justification for the accelerated growth rate is the progressive liberalisation of international markets, especially within the Association of South East Asian Nations (ASEAN), where the goal is for open skies by 2015.

One example of the impact of deregulation is the Kuala Lumpur-Singapore city pair, where frequencies grew by 72.5% in Sep-2009, as compared with the Sep-2008, after regulatory constraints were removed.

The same high growth rates are not expected in the relatively mature Australian market however – and here Tiger is planning to make most of its short term capacity increase, as it establishes itself more solidly there. Tiger considers itself “well positioned to increase market share in Australia as a result of (its) lower cost base and attractive fares.” After a modest beginning in Australia, Tiger  now has a 10% domestic market share (capacity) at each of its main bases in Melbourne and Adelaide and a 4% share at more recently established Sydney. Addition of new aircraft planned for this year will increase those levels.

As can be seen from the carrier’s route network, Australian routes have become a substantial part of its activity. 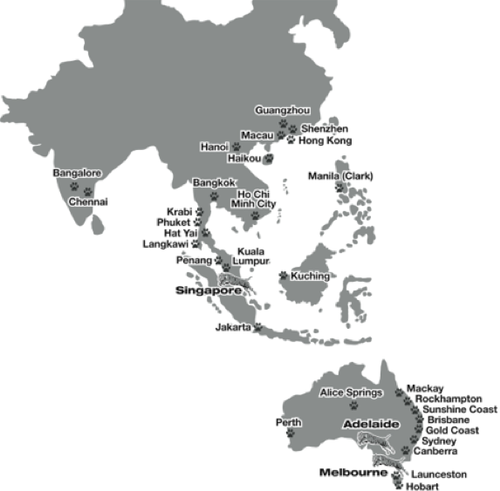 Getting a bigger foothold in the Australian market is Tiger’s express short term goal (and the Prospectus specifically talks of “Australasia”, which also includes New Zealand, although nothing further is elaborated). This has defied other less qualified operations in the past. There is tenacious competition from the established players and only limited market growth prospects.

So the battle will be to gain market share, with a view to achieving profitability as its market power increases. That will only come at a cost. Tiger is not profitable in that market yet and it will have to buy market share for some time to come. A stronger balance sheet is a good step in that direction and it will be nice to savour the temporary euphoria of the IPO result.

However, 2010 will present both major challenges and opportunities. On its new Sydney-Melbourne route Tiger is uncharacteristically chasing corporate business. That is a change of tack and one whose success depends at least partly on broader market presence.

It is also a sensitive spot for Qantas and Virgin Blue, each of whom relies on that sector for a yield margin. But if Tiger can genuinely maintain a lower cost base, as well as picking up a share of this lucrative premium traffic, its expansion strategy may well underpin a profitable future. And then… on to Asia.

For a full analysis of the IPO result and Tiger Airways’ outlook, see this week’s issue of Peanuts! Weekly