Tiger Airways Australia CEO Rob Sharp today, 3-Jul-2013, unveiled the rebranding of what had previously been a much less than warm and loving image in Australia's "purest" LCC model. The sometimes abrasive and unfriendly profile often shown - and even gloried in under Tiger Group CEO Tony Davis - had already softened since the airline returned to the skies after its 2011 grounding.

But now, in readiness for its future partnership with 60% owner Virgin Australia, that brand is to become a cuddly tigerair, "warm, passionate and genuine". The leaping tiger is no more.

A precursor to Virgin Australia's establishment of an across the board competitor for the Qantas-Jetstar (and regional) operating model, Tigerair needs to position as a real alternative to the more upmarket and near-seamless brand that Jetstar now occupies in the Qantas group. That allows easier connectivity between the brands. CEO Rob Sharp described the new style as "the start of our revival of our airline here in Australia". The rebranding also applies to the other Tiger entities.

There is to be a lot more to the new name and colours than simply a rebranding and a friendly new website.

According to Mr Sharp, the "look and feel of the new brand will be progressively reflected across the business through every customer touch point and represents a new era for the low cost airline which aims to connect more Australians to more of Australia, whilst making sure their experience is one that keeps them coming back for more." That's not what the old Tiger was about; generally the only reason people came back was the price.

But, while cuddles feel good - and are much more likely to encourage more travellers to repeat - it will be price that is key, especially as Australia's economy quickly cools.

The revived airline has performed reasonably well financially since it recommenced flying after its services were suspended in Jul-2011 by Australia's safety regulatory authority, CASA, on the grounds that "permitting the airline to continue to fly poses a serious and imminent risk to air safety". Its cautious and restricted return to the air a couple of months later meant that restoration has taken precedence over profitability. Under the now-more watchful eye of its new majority owner, Singapore Airlines, the carrier has performed well and displayed a new face, both to the regulator and to the travelling public.

At the time Tiger group's annual financial results to 31-Mar-2013 were announced in May-2013, Mr Sharp said he expected it would take up to two years to make a maiden profit as the airline takes the challenge to Jetstar as new capacity – and as a result low yields – will be added over the next five years. According to Mr Sharp, as the partnership with Virgin Australia is bedded down "It will take the first year to get the various opportunities under way and you'll see results in the second financial year,"

But the carrier's financial performance has been improving. In the Mar-2013 quarter, its operating loss, as reported by its Singapore based parent, narrowed to SGD15 million (USD12 million).

Mr Sharp also said at the time that Tiger Australia would not codeshare with Virgin Australia to avoid “brand contamination”. Qantas and Jetstar have found it convenient to allow hybridisation of the LCC in order to accommodate crossovers in selected situations. For example, Tiger's Singapore entity codeshares onto its part parent Singapore Airlines's flights - although the process does not work in the reverse direction, so Singapore Airlines passengers are never "downgraded" in this way.

As time progresses it is likely that Virgin-Tigerair will adopt many of the practices it sees to have worked successfully for its main competitor.

In doing so, the combination is likely to claw back market share - or at worst hold its own - from Qantas/Jetstar, so that, while the synergies of the new partnership might not result in obvious bottom line profits, they will at least establish a more formidable battlefront.

Domestic fare competition remains strong across the board, so Tigerair joins the Virgin team at the right time

The Australian Bureau of Infrastructure, Transport & Regional Economics (BITRE)'s monthly fare monitoring index indicates that Jun-2013' "best discount" fares in the market were 10% below the level they were in the same month of the previous year. Tiger tends to lead the market in discounts, but is currently only operating a very limited route network - so that its impact on overall prices is greatly diluted in this index. A wider scope of Tigerair services would drag the index down considerably.

But, for example, prices for Sydney-Melbourne travel on 6 August give an indication of some of the comparative pricing strategies. Tigerair has only 4 daily flights on the route, as against Qantas/Jetstar's near-shuttle operation, so has to "try harder".

Tigerair's lowest, best discount, one way price, at AUD44.95 is 50% of the level of Jetstar's, at AUD90, or a third of Qantas' AUD135. These differentials obviously vary but they are not exceptionally different. Virgin Australia's equivalent lowest fares on that day are similar to Jetstar's, at AUD85. 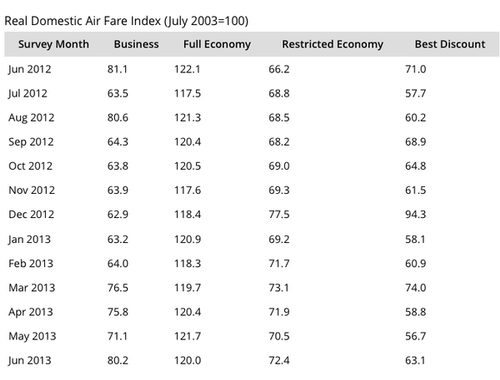 As capacity continues to be added - reinforcing Virgin Australia's battle for a position in the market - and the Australian economy softens, there is little prospect that the fare competition will go away.

Although not good news for anyone (other than consumers!) this makes it good timing for Virgin to be establishing a firm foothold at the low price end of the market. Virgin has no prospect of competing effectively at those levels now its cost base has increased in line with its metamorphosis to a full service airline. Tigerair will at least allow it to have a piece of the highly price sensitive travel segments.

But Mr Sharp recognises it will not all be plain sailing: "we have a long way to go. Our two priorities now are to create a stronger operating platform that can deliver growth and build a sustainable business....(in) the budget carrier market".

The LCC's rebranding and soon-to-be welcome into the Virgin camp could not be arriving a moment too early.