The spread of LCC operations around the world

50 LCCs existed in some form or other before 2000. Not all were LCCs at the time but have since been restructured or redeveloped, sometimes from shell companies, into LCC format. Fourteen of these have since closed, leaving 36 survivors.

This extract is from the ‘Spread of LCC operations around the world’ section of CAPA’s Global LCC Outlook report, available for free download at: centreforaviation.com/lcc/report

In addition, 128 LCC start-ups since 1999 have been identified.  This figure is based on operators that commenced flying and excludes several announced start-ups that never got off the ground.  Of those that did fly, 38 subsequently failed or were withdrawn from service.  Some of the latter were operated as subsidiaries by network airlines. Examples include Air Canada’s Zip and Tango airlines, which operated between 2001 and 2004, Delta’s Song (2003 to 2006) and United Airlines’ Ted (2004 to 2008).  In other cases, mergers or take-overs have absorbed airlines, removing their brands and removing or substantially modifying their services. 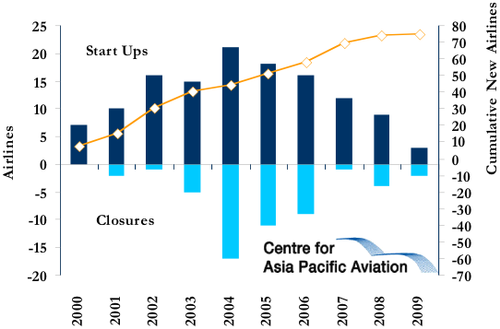 Note: Closures include 14 airlines in existence by 2000; excluding these, net gain 2000-2009 is 90 airlines
Source: Centre for Asia Pacific Aviation

Such a high rate of entry (and exit) is relatively rare in large, established, capital intensive industries.  It is an encouraging sign that deregulation, albeit halting and partial, has opened the sector up to innovation, new capital, and new ideas just when they were needed.  The development was made more remarkable against a background of limited market entry in the previous half century.

Deregulation was a catalyst, then, a necessary condition for overdue change.

There were other drivers of LCC entry during this key period:

But progressively, aircraft prices increased (see Section 10.2), fuel prices rose, the cost of skilled staff (notably pilots) increased, to be followed by the global financial meltdown (where credit dried up).  This deterioration of the ideal conditions caused the entry rush to decelerate rapidly from 2007 onwards.

Deregulation of an industry almost inevitably lowers barriers to entry.  This has been the case even in aviation, where deregulation has been sufficient to encourage competition and put downward pressure on fares.  The resulting introduction of new services to new areas has facilitated growth through market expansion rather than simply by cannibalising existing markets.  Most early LCC activity was based on new routes, emerging markets, and underutilised airports.

The first opportunities were opened up in the US, following airline deregulation in the late 1970s. But, surprisingly in retrospect, most of the openings seized upon in that market were by full service operators, entering new markets and reshaping their operating style – eg from grid systems to developing hub-based operations. As noted earlier, it was not until this century that Southwest Airlines became an admired and much-imitated model.

The model had however already been exported, first to New Zealand in the early 1990s and then to Europe as open skies arrived there from 1993 onwards.

As the low cost concept gained ground in Europe, the newfound – EU-mandated – liberal access regime quickly overcame silent barriers imposed by often-reluctant national governments, still anxious to protect their flag carriers (not to mention widespread skepticism about the validity of the model). The UK and Ireland were first to exploit the possibilities, a probable reason why Ryanair and easyJet are today the largest short haul operators in Europe.

Some of the most spectacular recent growth is today in regions like the Middle East and Eastern Europe.  The newer EU countries to the East have seen rapid expansion, as access restrictions were removed and Russia itself, with rapid growth around it, permitted expansion of airline entry. The result, with many aircraft still flying from a bygone era, has been a little reminiscent of the Chinese expansion of the 1990s, and a shakeout is now occurring.

In the Middle East, where internal liberalisation is still moving slowly, the Gulf states have led the way, with a proliferation of service particularly into nearby India.