Today’s October traffic results from Singapore Airlines are a little improved on recent months, as signs of demand recovery appear. But there is an important underlying trend in the average stage length of SIA’s services.

Two major developments have caused a fundamental rethink of strategy for Asia Pacific airlines. Each of them is directly concerned with yield.

At the lower end of the market, the rise and rise of low cost airlines has shifted the leisure market equilibrium towards a much lower price point on short haul.

Then in the past year, long haul premium traffic, the refuge of network airlines, has slumped, shedding 20-30% of passenger numbers and as much again in average yield.

This sector of the market was invaluable to the large network airlines, because (1) travellers are far more likely to choose to fly (or be permitted to travel on business) in premium seating for long haul; and

(2) for the time being, long haul operations are free from LCC competition.

But, when it collapsed, the premium service airlines were left with a lot of empty seats occupying large amounts of real estate on board and with a legacy of high servicing costs.

Adjusting to this shift is harder for most Asia Pacific airlines than for most others, as their fleets are newer and because the premium market had only quite recently become an even more brutal battleground as they turned more to long haul to escape the

The rise and rise of LCCs

From a negligible level of activity in 2001 – most of it confined to Australia and New Zealand – LCC operations today account for over 15% of all seats in the region. Much of this activity is concentrated in Australia and in southeast Asia. (Northeast Asia, where the really large opportunities for growth exist, once liberalisation occurs, has negligible LCC activity.) 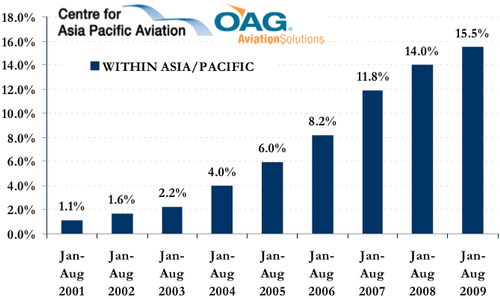 (Read more about the rise of  the low cost airline industry in LCC OUTLOOK REPORT: "The World has Changed")

In many cases low cost airlines have established new city pair routes, either generating new markets or diverting previous traffic flows over hubs. But the full service airlines have had to compete with the LCCs’ lower prices and have often withdrawn capacity on affected routes, or merely not increased it as the overall market grew.

Hence there has been a significant flattening in the capacity growth pattern over the past two years, when measured in seat numbers – perhaps surprising, as 2008, with its high fuel prices, was actually relatively benign for full service airlines, able to impose offsetting fuel surcharges to mostly price-insensitive premium travellers.

Capacity within Asia Pacific by LCCs and full service carriers: Jan-Aug 2001 to Jan-Aug 2009 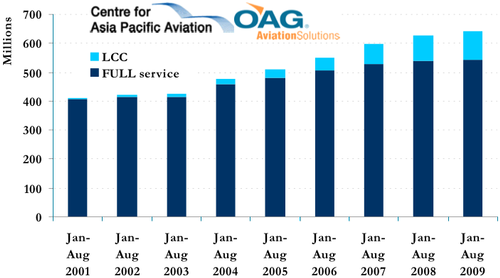 As the LCCs have intruded more onto the scene, full service network airlines have both slowed their expansion and steadily shifted capacity to longer haul markets. In the case of Singapore Airlines, a statistically significant 5.6% increase in average passenger stage length has occurred since 2007. Cathay Pacific’s average, less affected by LCCs and increasingly connected to the Chinese mainland market, has seen a considerably lower increase. 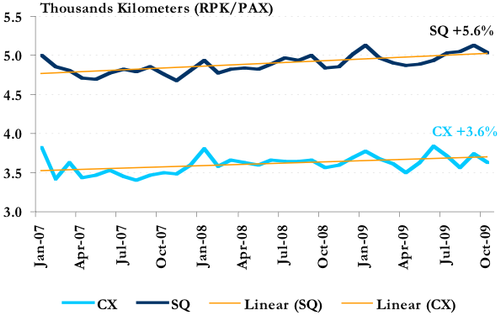 Both Thai and Malaysia Airlines have domestic networks, so for comparison purposes, these have been separated out, so that the following graph covers only the international services of these carriers. 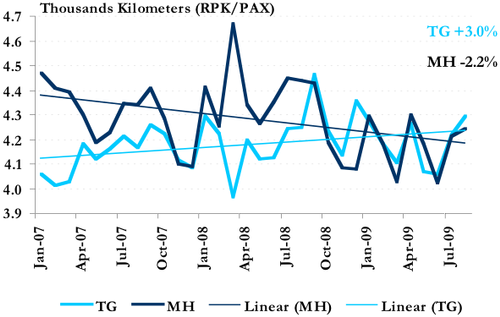 Here again, Thai is steadily increasing its stage length. But by contrast  Malaysia Airlines has actually reduced the average passenger distance flown. This may be due to its competitive position against the largest LCC in the region. But other factors are at play too.

The carrier has been focussing on improving yield and shorter routes normally generate higher average yields. Probably more importantly though, Malaysia Airlines is much less of a hub carrier than the other airlines reviewed here.

These changes may also be attributable to some extent to the aircraft mix in the respective fleets. For example, SIA was the launch customer for the high capacity, long haul A380 and now operates 9 of the type. Cathay has none. Qantas too operates the A380, but it has a very different story to tell. (Another common reason for increasing average stage length is to increase utilisation where markets are slack).

The Qantas graph below combines in one image both the long haul and the LCC phenomena. It also shows the value of the Qantas tow brand strategy. Qantas has steadily been handing over its less valuable routes to Jetstar and this shows markedly in the past year, with Jetstar occupying much more significance on the very busy and highly cutthroat New Zealand route (a stage length of only around three hours). This has pushed the premium service model’s average stage length up a remarkable 19.8%. 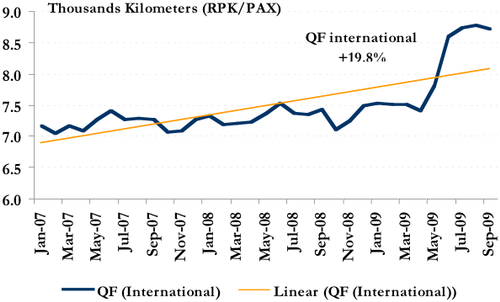 Has Qantas got it right?

But even with this important supporting team effort, Qantas has reached a stage where CEO Alan Joyce has finally succumbed to the expensive option of refitting the long haul fleet to include more lower priced seating. This is not a move that can be made lightly. Interiors are extraordinarily expensive to redo, not to mention the write-down of an already expensive interior.

Earlier this year, IATA talked of a market which “will not return” – the high volume, high value premium traveller. It appears that Mr Joyce has accepted this, presumably based too on forward booking behaviour. He is leaving himself some room for manoeuvre and rightly so, as we still cannot see around the corner to where this apparently brief recession is heading.

For Qantas, the judgment is probably right. Apart from the increased competition on the carrier’s plum premium routes (the US, South Africa and Europe), this may well be a turning point for the premium excesses of the past. With a stronger dollar, the balance of travel is once again outbound, after a 20 year reversal, and the Australian market is relatively mature. Importantly too, given its very long haul profile (on average well over 50% longer than its airline neighbours) Qantas had arranged a rather more generous percentage of up front seating. This looks likely to change now.

And, most pressingly, although Jetstar and the solid gold FFP that generates Qantas Group's cash, Qantas itself is haemorrhaging. Something needs to be done urgently to stem the flow.

But for the Asian airlines watching Qantas’ actions, there might be value in holding back just a little longer before sweeping away too many comfy chairs. The Asian aviation market has yet to express itself. China is a traffic explosion waiting to happen and as millions of millionaires emerge, they mostly won’t be travelling economy.

(Read more about the rise of the low cost airline industry in LCC OUTLOOK REPORT: "The World has Changed")