Thai Airways International is confident of a full recovery within the next few weeks from the Bangkok floods, which caused a big drop in traffic in November and a smaller drop so far this month.

Thai Airways reported a load factor of only 61% for Nov-2011, down 11 ppts from the 72% load factor recorded in Nov-2010. Speaking to CAPA at last week’s Star Alliance event in Ethiopia, Thai Airways president Piyasvasti Amranand called the 61% figure “terrible” but says December will be “a lot better than November” although the carrier will still not be able to meet its pre-floods projection of a 75% load factor for Dec-2011. Mr Piyassvasti expects the carrier to end this month with a load factor of nearly 70%, marking a significant improvement over November but not a full recovery. “January looks better,” he adds.

Mr Piyasvasti says forward bookings for nearly all markets are now healthy, giving Thai Airways confidence that its load factor will be back to normal in January. The carrier typically has a load factor of around 80% in January as it is a peak month for tourism in Thailand. Given forward bookings have now returned to pre-crisis levels, Thai Airways is hoping it can match in Jan-2012 the 78% load factor it posted for Jan-2011.

Mr Piyassvasti says after the floods initially hit Bangkok in late October there was one month of virtually no new bookings. Booking activity resumed by the end of November but that was too late for the end of the year holiday season.

Back in early November, during the peak of the crisis, Mr Piyassvasti warned that Thai’s passenger numbers were “dropping rapidly because no one is coming to Thailand” and that the carrier’s load factor for 4Q2011 would likely come in under 70%. Thai Airways had initially been banking on a load factor of about 80% for the quarter, which would have driven a healthy profit and helped offset the losses the carrier incurred during the first three quarters of 2011. Thai Airways is now expected to report losses for 4Q2011 and the full year.

The biggest impact from the Bangkok floods has been on Asian routes because Asian tourists typically book their holidays not as far in advance as European tourists, as CAPA reported last month. When the floods hit, most Europeans had already booked their end of year holidays and subsequently elected to keep their plans for travelling to Thailand intact because the floods did not affect any major tourist areas. Many Asians, however, had not yet booked their holidays for November and December when the floods hit and subsequently decided against holidaying in Thailand as their governments advised against travelling to the country.

Thai Airways and Thai tourism authorities were highly critical of the advisories because Thailand remained safe during the floods and Bangkok’s international airport remained fully open. The advisories have since been lifted but it was too late to recover lost bookings in several key Asian markets for November and to some extent December.

“For flooding the biggest problem has been the Asian market. The quickest recovery hopefully will be the Asian market as well,” Mr Piyassvasti told CAPA last week. “The Asian market has been very good actually all along until the flood came along and then we suddenly saw an enormous drop. Singapore, for example, we’ve been getting cabin factor of 85% all along. Then with the flood suddenly it goes down to less than 50% cabin factor. Now it’s coming back to over 85% again.”

China, Hong Kong and Japan markets are slowest to recover

While inbound traffic from Singapore has already recovered fully, Mr Piyassvasti acknowledges that some other Asian markets, in particular China, Hong Kong and Japan, are “a bit slower in the recovery”. But he is confident traffic from these markets will return to normal in early 2012, leading to normal load factor figures from January. 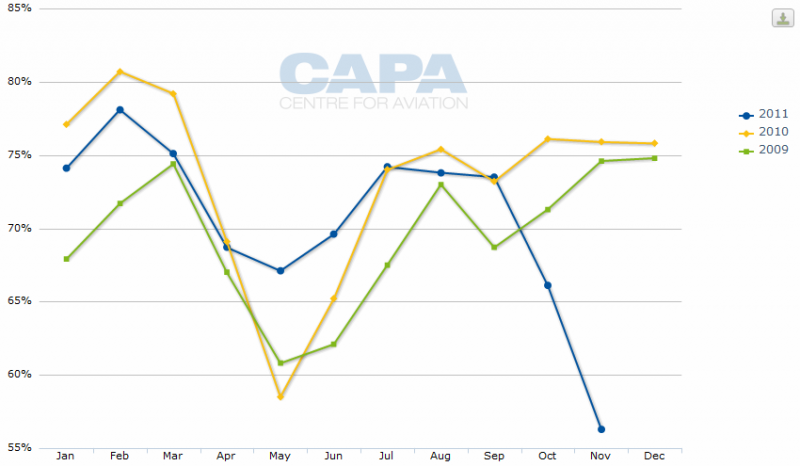 Thai’s European routes had an average load factor of 65% in Nov-2011, compared to 73% in Nov-2010. But Thai’s European load factors have been down all year due to weak demand out of Europe. Thai Airways also had a 65% load factor in Sep-2011 and had an even lower load factor, 64%, in Oct-2011. The recent weakness in the European market, which is likely to continue into 2012 due to the region’s banking crisis, is a huge concern to Thai Airways because Europe accounts for 31% of the carrier’s revenues based on data from the first nine months of 2011. 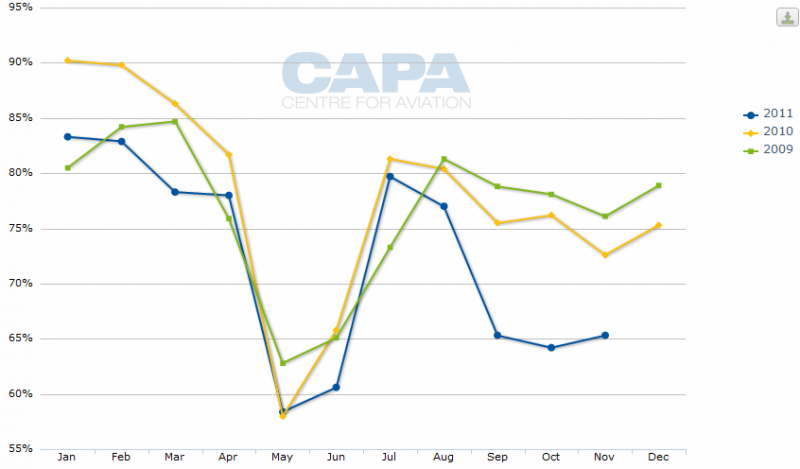 Thai’s domestic load factor was actually higher than normal last month, coming in at 75% compared to 67% in Nov-2010. There was high demand for domestic air travel in Thailand during the floods because road closures made travel by land difficult and in some cases impossible.

Highways have since reopened and nearly all the floodwaters have now receded. However, Bangkok’s closer-in domestic airport, Don Muang, remains closed and is not slated to re-open to commercial flights until April-2012 because the airport’s infrastructure needs to be repaired. The two carriers which serve Don Muang, Thai Airways partially-owned domestic LCC subsidiary Nok Air and Orient Thai, for now continue to operate all flights from Bangkok’s main airport, Suvarnabhumi.

Don Muang also is the site of Thai Airways’ main maintenance base. The carrier has been able to resume MRO operations at Don Muang but has reported that the flooding has resulted in a delay to its ongoing cabin retrofit programme. Thai Airways says work on one Boeing 777-200 and two 747-400s were delayed but the overall cabin retrofit programme is still expected to be wrapped up by the end of 2012. The carrier plans to retrofit a final batch of six 747-400s and seven 777-200s during 2012.

The cabin retrofits, an ambitious fleet renewal programme and a new multi-brand strategy, which includes the launch of new regional hybrid carrier Thai Smile in mid-2012, are major components of Thai’s transformation plan. The floods will result in unexpected losses for 4Q2011 and the full-year 2011 but with forward bookings again looking promising the carrier is confident it will be able to return to profitability in 2012.

For more on Thai Smile, see related article: Thai Airways to use Thai Smile to fight back at AirAsia and rapid LCC growth in Thailand