In the second part of this report, TransAsia weighs how it can expand traffic in Northeast and Southeast Asia but also counter growing foreign LCCs as well as the inevitable local Taiwanese LCC that has yet to form. TransAsia has laid out an undisclosed pathway to guide it depending on what outcomes occur in the Taiwanese market with respect to LCC development.

TransAsia believes it can counter LCCs and competitors in general with the carrier's forthcoming cutover to a new reservation system that will offer it greater agility and be the impetus for the carrier to raise online sales from at least 15% to, perhaps optimistically, over 50% within two years.

TransAsia is also watching the developments with alliances and partnerships and it is interested in having more friends, although the carrier thinks it is early days for it to consider joining a global marketing alliance; this could change if it were invited.

Taiwan has yet to see a home-grown LCC, the result of a lack of liberalisation of air service agreements and prohibitive government regulations, such as requiring new entrants to operate for a few years in the very small domestic market - a de facto protectionist policy. 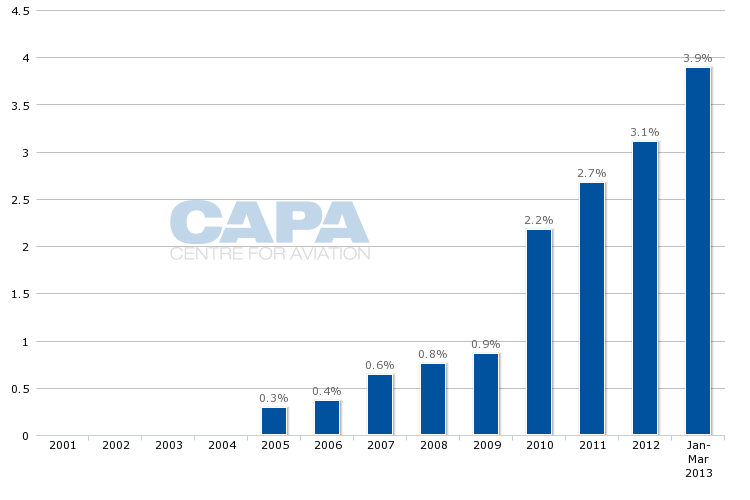 Foreign LCCs number about a dozen, and the launch of Taipei service in 2012 from high-profile LCCs like Peach and Scoot created an unusually public discourse about LCCs in Taiwan, although they represent less than 5% of seat capacity. But as other markets have shown, growth can ramp up rapidly. TransAsia chairman Vincent Lin, pushing a change agenda, even told the local Taiwanese press that he supported establishing a Taiwanese LCC in partnership with competitors China Airlines and EVA Air.

The suggestion was largely impractical: sharing an LCC between two competing airlines in the same market creates conflict of interests, especially as LCCs hybridise and partner with full-service carriers. But Mr Lin succeeded in pushing the LCC topic, and government regulators announced they would accelerate the possible development of a LCC terminal at the capital, as well as review landing charges.

When asked about the remarks, Mr Lin is coy. “Why couldn’t it be a serious thought?” he says semi-playfully. “I said it then and I don’t think I should go back and say I was kidding. I wasn’t.” 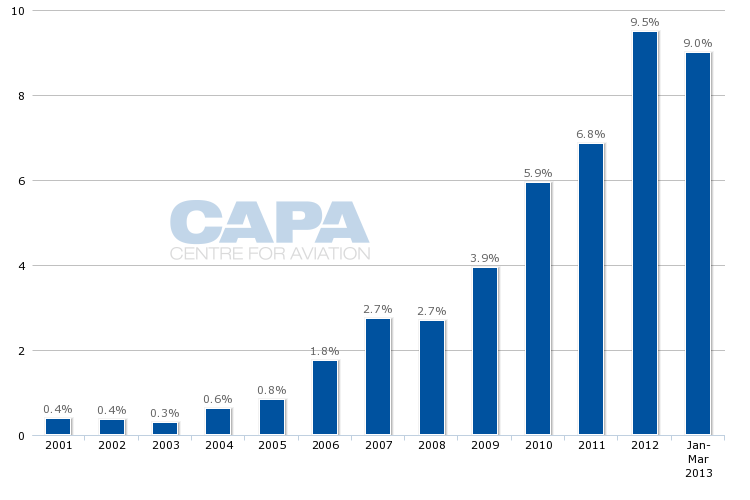 In a stark contrast to China Airlines and EVA Air, which are disconnected from the LCC discussion, TransAsia has at times given the impression its model is in flux and the carrier may revert to a hybrid or LCC model. TransAsia, for now though, is clearly heading on a full-service, premium path.

But yields have yet to catch up. In early 2013, TransAsia offered Singapore-Taipei return fares inclusive of taxes for about USD315 while LCC Tiger Airways priced out to USD275. Once luggage, meals and drinks are included on Tiger (Tiger offers no IFE, which TransAsia does), its fare is higher than TransAsia's.

Mr Lin mantains TransAsia is competitive, and adds of profitability: “it’s all right, actually”. Macau, mainly a leisure destination, offers another type of yield discrepancy. Economy fares are around USD300 while business class is only USD400. A cross-Strait flight to Shanghai about the same distance as Macau, offers better yields: economy is USD400 while business is USD900. “That’s a market issue,” Mr Lin says, noting that while some fares may be low, he is not necessarily chasing market share. “The angle of course is still to be profitable.” 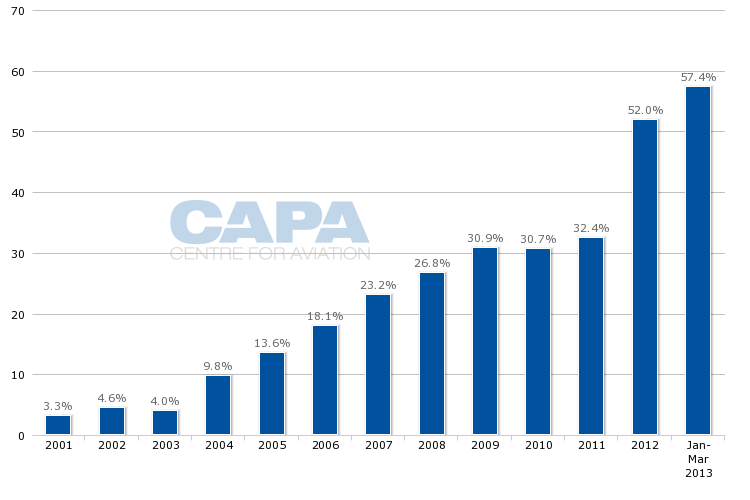 The evolving yield environment will change further with greater LCC presence - and probably much faster than expected. TransAsia has unspecified plans in place to change its business and adapt to an environment with greater LCC presence. “There are contingencies and thoughts put in already depending on how the situation develops,” Mr Lin says. “There are some proactive plans in place that will depend on certain triggers on the industry. If it happens, we would make changes. There is a path that has been developed.”

This smacks more of complacency than the necessary commitment to a new environment, as Taiwanese consumers warm to the concept of cheap fares and short trips to Japan and elsewhere. The growing Taiwan-Japan market will give some early indications of competitive potential with LCCs. Following open skies, Taiwanese carriers are largely targeting secondary Japanese cities while Japanese carriers are taking a back seat, save for Peach, which serves Taipei with double daily services from Osaka Kansai. That deployment gives Mr Lin some confidence.

“We’re seeing the LCCs have a mandate to attack those trunk routes. I don’t think LCCs can survive based on secondary cities at the moment, not in Asia. I know that’s how they flourished in Europe, but I think Asia is a different type of market where you have to attract the trunk routes in order to get that type of traffic flow,” he says. Many others before have fallen into this same trap.

While LCCs do make a big business on trunk routes, they are expanding to secondary points, and this will be a theme of Japanese LCCs in 2013. Peach in 2012 launched services to secondary cities while Jetstar Japan is turning its attention to these cities, which are starved of services – untapped demand – and have unprofitable airports looking to negotiate on landing fees. In time, domestic services from secondary cities will turn into international services as well, especially where secondary Asian cities have populations much larger than secondary European or North American cities.

Nonetheless, TransAsia’s entire network could be reached by LCCs at either end. As for connecting traffic, Jetstar Hong Kong – an hour south – sees itself linking Jetstar’s Southeast Asian presence with its Northeast Asian presence, making it a potential competitors to TransAsia. A Hong Kong base places southern Southeast Asia – namely Indonesian – in better range while a Taiwanese base places Japan in better range; LCCs generally prefer narrowbody flights to be kept at no more than four to five hours. Hong Kong to northern Japan (direct) would exceed those timings.

While TransAsia's vague response to the LCC threat is discomfiting, being in control of its destiny – booking channel – is critical. TransAsia currently uses China Airlines’ legacy system, but later this year will announce a new vendor to cut over to.

This change is part of TransAsia’s goal to drastically increase the percentage of bookings coming on its website from 10-15% at least, to over 50% in two years. Mr Lin acknowledges that to achieve this there will need to be a “big push”, but privately those familiar with the carrier expect  a smaller, more reasonable percentage to be enough to satisfy the airline's goals.

“It’s part of our strategy to react to the changing world. We feel a new generation reservation system and back office system will enhance TransAsia’s capacity to make certain decisions quickly, to implement them quickly and be able to pass on these advantages to the consumer,” Mr Lin says. Greater web bookings would allow TransAsia, for example, to offer more add-on services than what a GDS can readily accommodate.

The Goldsun Group, the family-owned business that owns TransAsia, also owns a travel agency (this is not uncommon in Taiwan as airlines are restricted in selling certain types of packages). The agency has a low share of the overall market, and Mr Lin describes it as both a friend and a foe. The agency will use TransAsia’s new system, allowing for greater control, but as Mr Lin notes “I believe there’s a level of consumers that don’t necessarily require the service of travel agencies”.

Alliances and partnerships are important to TransAsia, but global alliance membership is unlikely

Mr Lin is actively watching the global development of alliances and partnerships and sees them as important drivers of growth for TransAsia. They are currently nascent with TransAsia, with the carrier’s most notable partnership being a codeshare with Shenzhen Airlines, which joined the Star Alliance in Nov-2012.

Mr Lin is open to a range of partnerships, including interlines and codeshares. As for global marketing alliances, he says that “for TransAsia, it’s too early to be aligned to any one of the alliances” but quickly notes, “we would consider if we were invited into any of the alliances. We would seriously consider it.” 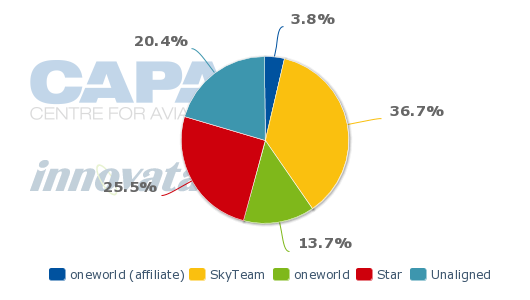 Domestic competitor China Airlines is a member of SkyTeam while EVA Air is a pending member of Star Alliance, making TransAsia’s addition to either of those alliances unlikely given the small size of Taiwan, unlike other markets (such as China and the US) that have supported multiple carriers in the same alliance.

That leaves oneworld, which is looking to expand its membership base with smaller carriers (SriLankan Airlines is a pending member), but existing Asia members of oneworld - such as neighbours Cathay Pacific and Japan Airlines - could find conflict in TransAsia’s presence. An alliance ascension seems to be a more medium- or long-term development rather than short-term.

Mr Lin notes the uncertain role global marketing alliances will have in the airline's future: “I don’t think they’re past their time, but as more members join an alliance, it gets more complicated and the dynamics between the airlines, within each alliance and between alliances are getting murkier and murkier. I don’t know what’s the future of these alliances.”

TransAsia has a one-off opportunity; it would be a pity to miss it

He may well be right to be sceptical about the shape of multilateral evolution of the industry, but as change rapidly dawns on this previously sleepy - competitively - corner of the world, the need for adaptation leaves little time to prevaricate.

As competition grows and new entrants proliferate, cost becomes king, innovation its handmaid. Consumers flow with lower prices and the growth is in short-stay trips. A carrier like TransAsia, which should be able to react faster to market change than its larger peers, has a one-off opportunity to prepare for the new opportunities, as well as to head off the threat of new entry. It would be a pity to miss it for lack of vision.

The third and final part of this report will look at TransAsia’s presence in the cross-Strait market as well as its long-term growth potential of intercontinental services and establishing branch offices.