Sweden is the most environmentally aware country in the world and has its own, internationally recognisable ambassador for the cause.

Aviation has been targeted for some years by way of taxes, as one might expect, and passenger numbers were falling before the coronavirus pandemic.

But the aviation sector is emerging from the pandemic in better shape there in Sweden than anticipated, the initial recovery led by air travel from remote northern regions where there is no other choice. Four times the number of passengers travelled in 1Q2022 compared to the previous year.

Financially, the recovery is slower, and while environmental resistance to the resumption of air travel is muted for now, the sector faces more tests in the immediate future.

With hefty aviation taxes already charged, Swedish air travel had been in decline since 2018

Of all the larger airport operators in Europe, the one that might be considered the least likely to bounce back quickly from the worst effects of the COVID-19 pandemic is Swedavia – the state operator that owns and manages the 10 busiest airports in Sweden, including both the Stockholm airports and the main one in Gothenburg. 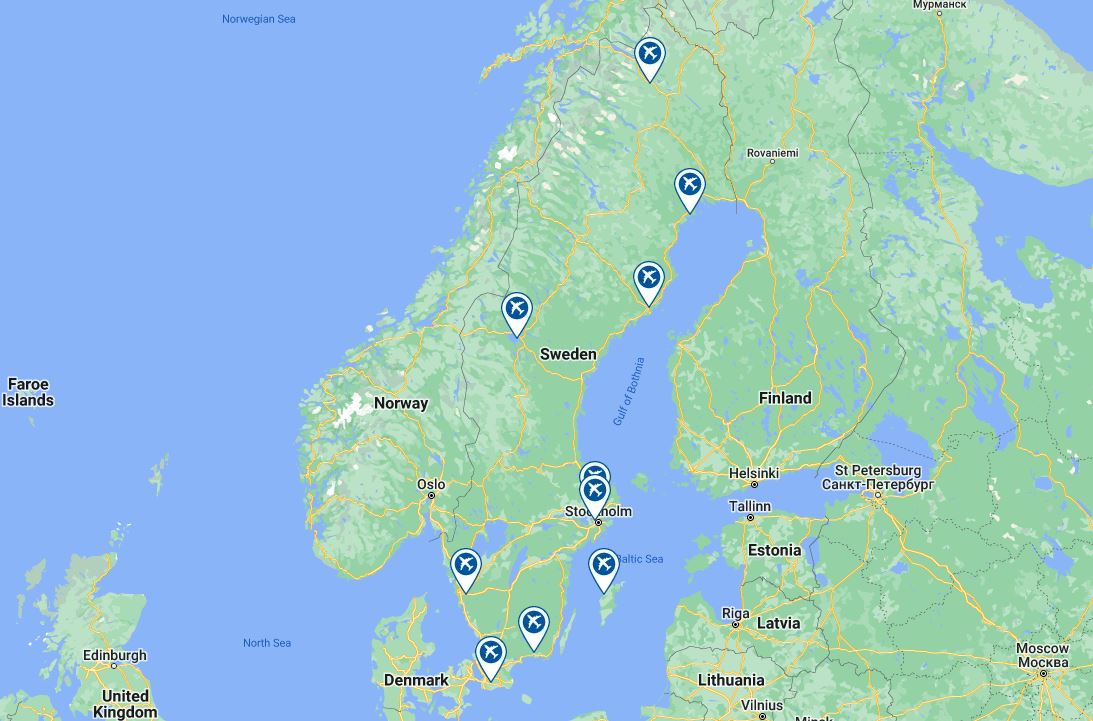 It is not so much the physical impact of the pandemic on travel; after all, the Swedish government was comparatively quite lax in its implementation of rules and regulations initially, although they were subsequently tightened.

Rather, it is more the case that the country is one of the most environmentally aware in Europe. There are hefty aviation taxes in place, and overall air passenger growth – partly caused by those taxes – had stalled in 2018, then fell in 2019 by more than -4% – even before the pandemic set in.

Those statistics are evident from the chart above, but what is also evident is that passenger growth, having returned in 2021, has rocketed in the first four months of 2022 – by +376%, which is almost four times more than 1Q2021.

That compares well with other Nordic countries where full-country data is known for the same period, such as Norway (+230%) and Finland (+514%).

The Swedish passenger recovery began in Feb-2022 when, despite the fact that traffic was still down by -58% compared to 2019, it increased by +335% year-on-year (i.e. vs. 2021), with the strongest recovery recorded at the Kiruna and Luleå airports in the far north (where air travel is a necessity, not a lifestyle choice). The recovery was driven mainly by the easing of restrictions, airlines' new investments, and pent-up demand for travel, according to Swedavia.

A high majority (91%) of Bromma’s seat capacity is domestic presently, compared to 21% at Arlanda, and it is the domestic ‘market’ that is under threat from the environmental lobby to the greatest degree in Sweden, which has an extensive and largely electrified modern rail network, although the distances can be long, together with journey times.

On several occasions the government has announced its intention to close Bromma, and it confirmed that strategy in Apr-2021 when it said that the airport would close between 2025 and 2027.

Then, in Feb-2022 it appointed an investigator to propose a development plan for Arlanda Airport, with the goal of securing sufficient flight capacity to close down Stockholm Bromma Airport, which remains the country’s third busiest facility.

The plan will include environmental permits designed to ensure that the development contributes towards the transition to fossil-free aviation at Arlanda. The deadline for submission of the plan is 15-Jun-2022.

Aviation-related environmental reasons are thus at the forefront of this decision, but at the same time a government committee will look at how the airport land can be freed up for housing. The availability of housing in Sweden's capital city has long been an issue, and the closure of the airport should make more than 400 acres of land available for residential development in an area only 10km from the city centre.

Then, in Apr-2022, Swedavia recorded its highest traffic month since the outbreak of COVID-19, with total passengers exceeding 2.2 million, prompting it to state that the recovery is "now proceeding at a rapid pace".

The company cited investments in new summer routes and airlines' steady expansion as significant to recovery, adding that it was continuing to adjust the scale of operations to meet the rapid growth in demand.

Swedavia added that it was carrying out major recruitment drives in cooperation with its business partners to support this ramp-up of operations and demand as "it is difficult for operators in the industry to manage to recruit staff in a tough labour market at the rate that is now needed".

Swedavia and the airlines are, of course, not alone with this particular problem, which has resulted in four-hour long queues to get through security and border control at some airports, and large ‘golden hello’ payments to cabin crew throughout the continent.

Revenues up impressively in 1Q2022, but bottom line has barely improved

Financially, Swedavia painted a positive picture in its most recent statement, for the three months ended 31-Mar-2022, with large gains across the board.

Nothing to shout about there, but matters improved considerably in the final quarter, in which operating and net losses were reduced by -70% and -65% respectively.

The picture was brighter still on the revenue side in the first quarter of 2022 (4Q2021), as tabulated below:

There is a lack of correlation between the large revenue gains in that quarter (over +400% in passenger charges, +175% in retail and FBO, and +211% in car parking) and the bottom lines, which demonstrated another very small reduction in losses in comparison to the previous period (only -15% for operating loss and -14% for net loss).

Jonas Abrahamsson, Swedavia’s CEO, says that “travel is still far from pre-pandemic levels, and as a result we posted a loss for the eighth straight quarter”. But that does not explain that relatively small loss reduction.

It is known that development projects are under way at Arlanda Airport, with an integration of Terminals 4 and 5, a new modern security checkpoint, and a new marketplace that will be put into service next summer.

Some infrastructure projects have been put on hold, but USD2 billion to be spent on Arlanda Airport

Some projects have been put on hold. For example, early in the COVID-19 pandemic those projects to build pier G at Arlanda Airport Terminal 5 and a new baggage system, also in T5. Overall, Arlanda’s master plan calls for USD2 billion in capex through to 2043, including terminal extensions.

But those costs would not normally be expected to dent those bottom lines to such a degree.

Mr Abrahamsson is convinced that there are "many indications" that its airport network is "headed for an intense summer" of traffic, and that the expected rise in numbers will continue to present operational challenges, requiring recruitment throughout the industry, and with "staff shortages in some cases limiting capacity in the system".

With regard to the aviation tax system, which had prompted the passenger reduction of -4.5% in 2019, Swedish Aviation Tax is levied on commercial flights carrying passengers and departing from a Swedish airport. It only applies to larger aircraft, as aircraft with a seating capacity of 10 or less are exempt.

The tax rate depends on the passenger’s final destination. Flights on domestic flights and to countries listed under Appendix 1 of the Aviation Tax Act pay SEK64 (EUR6) per passenger.

Passengers travelling to countries listed under Appendix 2 are charged SEK265 (EUR25.2). For the few destination countries not listed in Appendix 1 or 2, the tax rate amounts to SEK424 (EUR40.4) per chargeable passenger.

In the most recent comparison chart (2018) Sweden was the sixth most expensive country in Europe for aviation charges, with an average charge of EUR14.48 per passenger.

The UK ‘led the way’ with average charges of EUR40.04 pp and Italy, Norway, Germany and France were all more expensive than Sweden.

Ryanair – which has always engaged forcibly in the aviation tax debate – recently (Apr-2022) urged Sweden's government to abolish Swedavia's environmental tax system at Gothenburg Landvetter and Stockholm Arlanda airports, stating that the policy "rewards airlines based on the number of seats... rather than on the actual CO2 emissions" based on passengers who board.

Ryanair sustainability director Thomas Fowler stated: "Applying a higher tax rate to a full aircraft [rather] than an empty one, just because it has room for more, is completely counterproductive... Environmental efficiency and any associated taxes must be based on the actual CO2 emissions per passenger, which is the standard measure the EU has already chosen".

Taxes not demonstrably hampering the recovery right now, but industry has to stay ahead of the game in Sweden more than anywhere

Such inquisitions about tax rates and mechanisms will rumble on; but what can be taken for certain from the passenger data is that while such taxes assuredly impacted travel decisions before the onset of the pandemic, they are not doing so now, while the industry is in a convoluted recovery mode, at times overwhelmed by its own short term success.

Sweden is by far the most ‘sustainable’ country in the world, with the highest renewable energy usage and lowest carbon emissions. By 2045 the country will have reduced emissions by -85% to -100%. More than half of the energy consumption is produced by renewable sources.

Sweden has also lowered emissions through the use of electric buses, ‘smart roads’, and urban farming. The air transport sector has to keep ahead of the game all the time or the country’s inhabitants may again turn their back on it.

In the vanguard of the western response to the Ukraine invasion

And there is more to it than that.

Sweden will also be a test case for the impact of the threat from Russia on the travel industry in Western Europe, and on any formal decision Sweden makes to join NATO to combat that threat.

Troops are already stationed on Gotland, Sweden’s holiday island, to defend Baltic Sea channels, the Russian exclave of Kaliningrad being only 250km distant.

Then, as with most other countries, there is the growing threat of inflation and even food shortages, arising directly or indirectly out of the Ukraine war as food is weaponised. You can’t eat an air ticket.