Australia’s domestic market is seeing some rapid changes in the latter part of 2020, breathing life back into the airline sector and boosting confidence that the industry’s outlook will be dramatically improved in 2021.

The factor that’s driving the Australian domestic market is of course the reopening of state borders, and there have been some major breakthroughs in this regard. As domestic borders open airlines are responding quickly by adding back routes and ramping up capacity, as well as reactivating more of their aircraft. Seeing the domestic market roar back to life comes as a welcome relief for both airlines and the Australian travel industry.

The picture remains clouded for the return of significant international services, as there is still no firm timeline for two-way travel corridors. But domestic operations should be enough to sustain Australia’s major players – and even a brash new entrant – while they wait for international borders to reopen.

Capacity recovery stalled, then took off from Nov-2020

This chart gives a broad look at domestic capacity movements through 2020, which have been a bit of a rollercoaster ride. There was an initial plunge early in the year, followed by a slight recovery. But then the second wave of infections in Victoria and elsewhere caused the domestic recovery to stall, with little change from about Jul-2020 through Oct-2020.

Then in Nov-2020 things started to change quickly, with a significant uptick in capacity as some important markets reopened. The New South Wales-Victoria border opened on 23-Nov-2020, which was a big one, and Queensland reopened to Victoria and all of New South Wales on 1-Dec-2020. Other borders have since followed.

The rise looks dramatic, but it is important to note that this is from a low base. Other markets such as New Zealand, Vietnam, Japan, China and others have already seen domestic rebounds, so in some regards Australia has been lagging behind and is just now catching up.

Interstate routes are once more in the ascendancy

The following charts examine Australia’s top-10 routes by seat capacity. The rankings lists are worth revisiting periodically because they provide a good picture of how things are changing in the domestic market.

In early Oct-2020, all but two of the top-10 routes were intrastate – within states –  due to the border closures, with Brisbane-Cairns at the top. 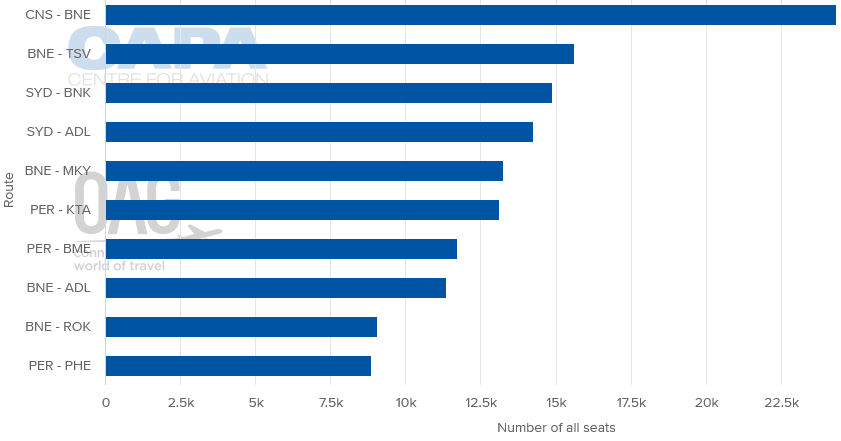 But looking at the rankings for the week of 7-Dec-2020, there are six interstate routes on the list, including four of the top five. Sydney-Melbourne has now reclaimed its place as Australia’s busiest route.

Before COVID Sydney-Melbourne was one of the top five domestic routes globally, and it has now climbed back to 17th place on the world rankings, even though seat capacity is still down more than 50% year-on-year, according to CAPA data.

The main story for Qantas is the rapid capacity buildup in the domestic market over the past month or so, reflecting the broader trend.

The carrier said its domestic capacity jumped from 30% of pre-COVID levels to 40% from 23-Nov-2020 when the New South Wales-Victoria border reopened. Further gains since then mean Qantas domestic capacity will reach 68% for the month of Dec-2020.

Flight increase means more aircraft in the air, and more employees at work

Of course, these capacity increases have important ramifications for airline fleets and employees. Adding routes back means Qantas and Jetstar have been able to reactivate many of their grounded narrowbody aircraft to operate the flights as they resume.

This chart shows how the Qantas Boeing 737 fleet has been returned to service. Qantas had just 18 of its 737 fleet in service by the end of Apr-2020, with 57 inactive, according to the CAPA fleet database. The active number rose to 37 by the end of Jul-2020, but then plateaued through Oct-2020 before increasing to 48 by the end of Nov-2020.

Also notable is the fact that Qantas is putting some of its widebodies back into service on domestic routes. The majority of the widebody fleet will still remain grounded, because scheduled international flying is pretty much off the menu. But some of the Qantas 787s have been reactivated to fly more repatriation flights, and they will also be used for selected domestic flights. Some of the A330s will be used domestically too.

Qantas looks to activate aircraft wherever it can

Frequent changes in state border restrictions require airlines to be “very agile and flexible” in their network planning, Qantas CEO Alan Joyce said during a recent Q&A with Aviation Week. However, this is complicated by the fact that it takes a couple of weeks to reactivate a parked aircraft. “So it’s not like you can turn on a dime with some of these decisions,” Mr. Joyce said.

The airline will generally try to deploy its aircraft if it can, said Mr. Joyce. Like all airlines it has sizeable overhead costs that must be paid whether its fleet is grounded or not. “We say we’d rather make a dollar in the air than lose a dollar on the ground,” he said. If an aircraft can cover its direct operating cost and at least make a contribution to fixed costs, then the carrier benefits from activating it.

The strategy in the current uncertain environment is to try a route, and if it does not work, admit it and move on, Mr. Joyce said. “You’re better off doing that than doing nothing and leaving the aircraft on the ground.

Virgin Australia will continue to bring aircraft back into service

Virgin Australia is also boosting domestic capacity. This chart shows how the slow increase in capacity ramped up sharply from 23-Nov-2020, when the major border openings began occurring. Further rises are coming, and Virgin projects it will be operating 60% of its domestic capacity by Jan-2020.

However, Virgin will not fully rebuild to its pre-COVID 737 fleet of about 80, at least for some time. As part of its restructuring, the airline decided to retain 56 of its narrowbodies and returned the rest to lessors. The widebody fleet of A330s and Boeing 777s was cut entirely, meaning the narrowbody fleet will handle short-haul international flying when it resumes.

Virgin added more clarity to its fleet strategy when it announced a deal with Boeing to restructure its orders for Boeing 737 MAXs. Virgin previously had 25 of the larger -10 version due from Jul-2021 and 23 -8s due from 2025. Under the revised agreement, it will only take the 25 -10s, with first delivery pushed back to mid-2023. The carrier has delayed the deliveries before, most recently in 2019.

Long-haul flying remains on the horizon for Virgin

Virgin has said it will eventually return to long-haul flying, which means it has to add back widebody aircraft at some point. The carrier previously signaled that a widebody order – presumably for 787s – could be part of its negotiations with Boeing regarding the MAXs.

However, no such agreement was revealed regarding widebodies. Instead, Virgin said it “remains in discussions with aircraft manufacturers on a fleet strategy to support the reintroduction of widebody services when long-haul international travel demand returns.”

During the CAPA Live event on 9-Dec-2020, Virgin Australia CEO Jayne Hrdlicka said the carrier will probably not resume widebody flying within the next 18-24 months. She noted that obtaining aircraft will not be a constraint to restarting long-haul since it is a buyers’ market at the moment.

In terms of fleet strategy, airlines “have flexibility that we would [not] have dreamed of a couple of years ago,” Ms. Hrdlicka said. “Access to aircraft is much easier than it’s been probably in two decades” and aircraft prices are now “incredibly attractive.”

Battle for domestic market share will pick up intensity again

The Australian domestic market is going to be “super competitive” for the immediate future as the incumbent carriers rebuild their networks, Ms. Hrdlicka said. This will make it challenging for Regional Express Holdings as it looks to add 737s for the first time to take on Virgin and Qantas on trunk routes.

Virgin Australia “has no intent of backing off that market share” as the company is “well-funded” and has a strong balance sheet thanks to its acquisition by Bain Capital, Ms. Hrdlicka stressed. Rebuilding the domestic market is a “long game,” she said. “So of course we very mindful of making good, prudent financial decisions, but this is very strategic.”

Qantas, Virgin will tussle in short-haul international markets, but not long-haul

Australia’s domestic market has been volatile through most of 2020, as borders have closed and opened. It appears to be headed back towards some degree of normalcy, although recent experience shows COVID-19 cannot be counted out so easily. It will take the arrival of a vaccine to give more certainty that the airlines have fully moved beyond the problems of 2020.

Next year should be good for consumers, too. Virgin has emerged from administration in a stronger position and a renewed commitment to defending its market share. Qantas and Jetstar will likely be equally as aggressive, and newcomer Rex will be fighting for its place in the sun.

For the first part of 2021 the domestic market will be the only battlefield for the Australian carriers. A new front will open when two-way flows between New Zealand and Australia resume, with Qantas and Virgin both signaling they will ramp up services quickly, and with Air New Zealand joining the contest. But assuming longer-haul routes open later in the year Virgin will probably not yet be ready to compete in these markets, and at that point Qantas will enjoy a decisive advantage.