After growing rapidly in new markets during the past couple of years, Spirit Airlines is taking a pause in new city additions in 2020, instead opting to bolster frequencies on certain routes and connect exiting points in its system that are not currently linked together.

The result of the shift is that the number of seats deployed in Spirit’s immature markets is falling, and fewer new routes coupled with some culling the airline has done in its network should help Spirit preserve solid operating margins.

Despite the pause in new city growth, Spirit is adding a couple of new international points in its network in 2020 to Barranquilla and Bucaramanga, Colombia, expanding the number of destinations on its Colombian route map to five.

Spirit added nine new cities in 2018 and seven in 2019, and the airline’s management recently stated that the company was taking a pause in the number of new markets planned for 2019.

Company chief commercial officer Matt Klein told analysts and investors that the percentage of seats deployed into immature markets grew from 5% in 4Q2018 to 8% in 2019.

In addition to taking a breather in adding new cities to its network, Spirit is “always doing network adjustments and optimisation”, said Mr Klein.

Since 1Q2019 the airline has launched 68 new routes, he explained, and has exited 15 other routes. “…that’s a pretty good add to remove ratio for us. So, as you think about what we either pull down or pull out of on occasion, that is an immediate benefit to your revenue, and it’s also immediate benefit to margin as well.” Spirit’s current guidance shows a pretax margin of 12% in 2020, which is essentially flat year-on-year.

Adding frequencies on routes it already serves will take up two thirds of Spirit’s growth in 2020, with new cities representing 15%, and the balance is connecting the dots, which are cities that Spirit current serves but does not yet connect.

In conjunction with its new city push during the past couple of years, Spirit made the decision to retime some of its international markets to Latin America and the Caribbean from Orlando International, which is the airline’s second largest base measured by departing frequencies. 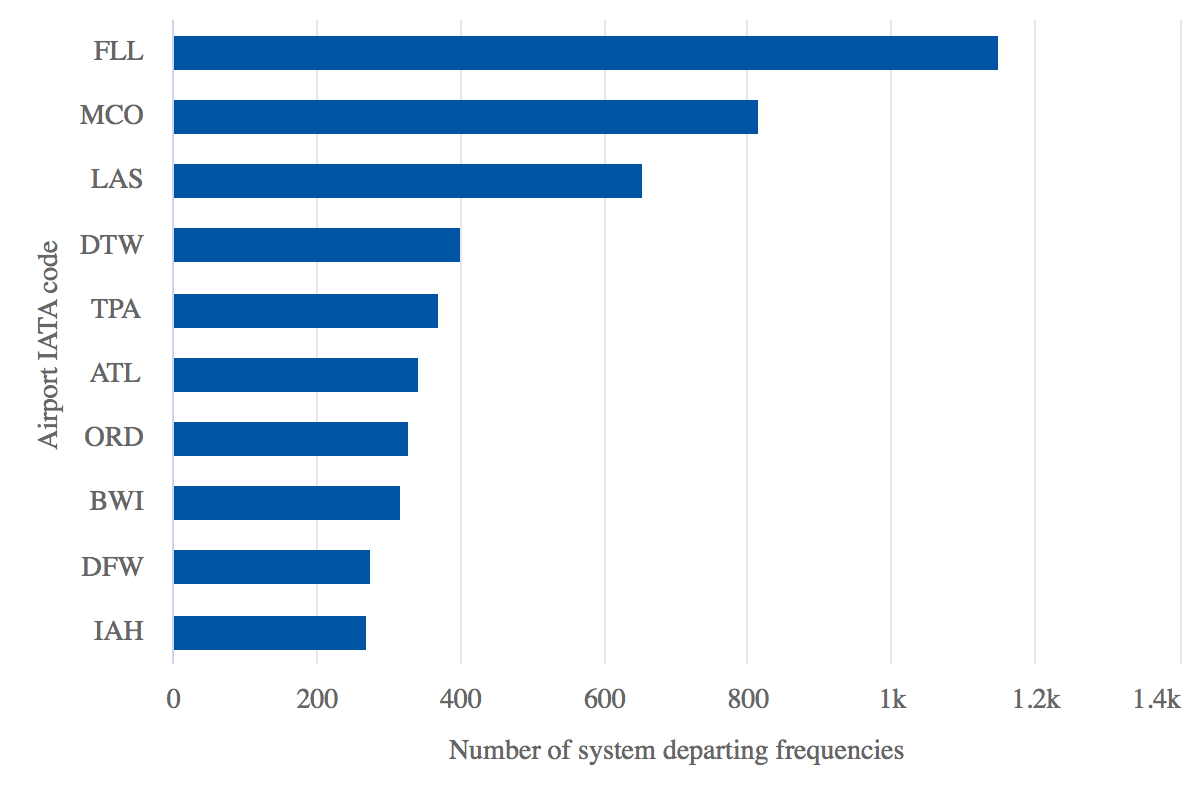 “We are very pleased with how the retimed routes are performing and their rate of spool”, Mr Klein stated. He said that Spirit’s Latin and Caribbean markets were continuing to perform well, but he cited some softness in the Dominican Republic, and as a result, the airline has made some capacity cuts in that region.

Demand from the US to the Dominican Republic declined in 2019 after the deaths of numerous US tourists that travelled to the country.

More recently, Spirit has added a lot of capacity to Puerto Rico – the US territory is the airline’s largest international entity, measured by departing frequencies. A series of earthquakes struck the island in early 2020, and there could be some short term pressure on demand. 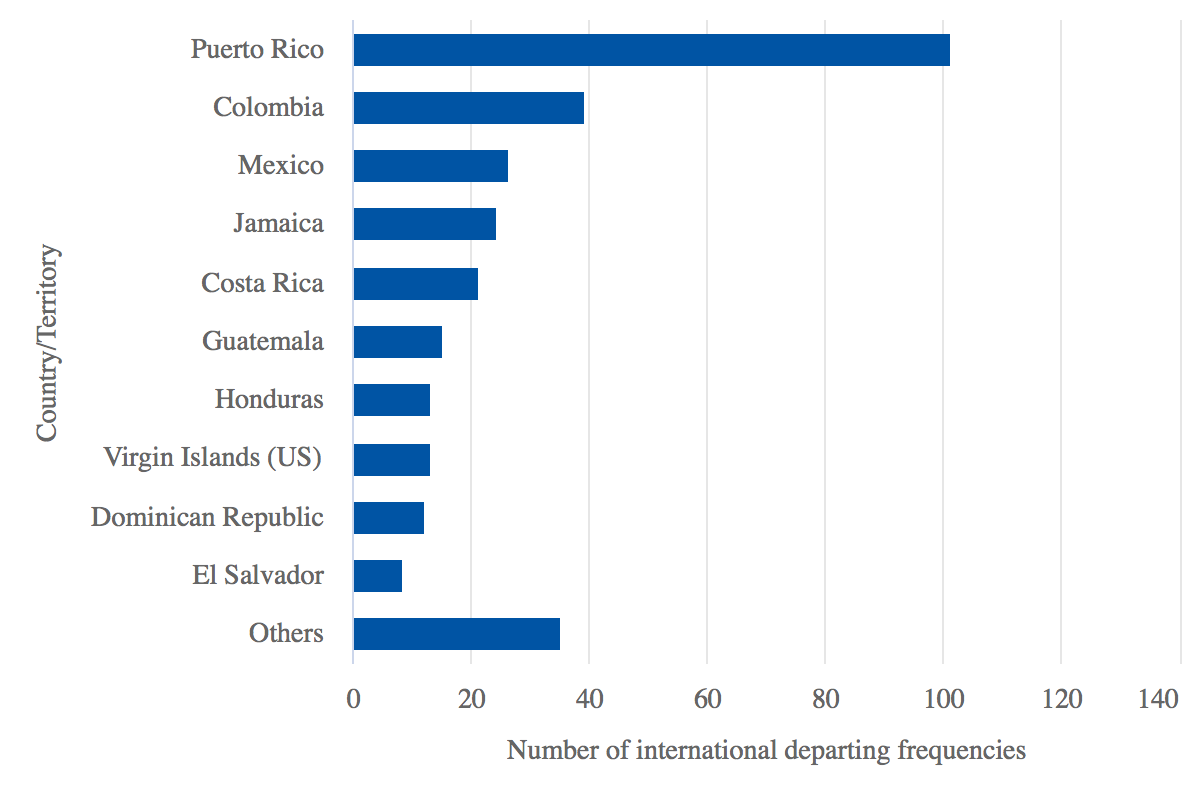 Executives at JetBlue, which is the largest operator between the US and Mexico, recently stated that given recent booking trends, the airline was temporarily reducing capacity in the market.

Mr Klein remarked that Spirit has seen some impact in Puerto Rico, but “it’s really hard to say exactly that it related to earthquake versus just increased capacity in general”.

The capacity Spirit has added two Puerto Rico is “doing quite well for us, actually, from an earnings perspective”, Mr Klein said. He explained that it was too early to estimate the effects from the earthquake, “but as of right now, we like what we’re doing in Puerto Rico.”

Data from CAPA and OAG show that as of early Feb-2020 Spirit was the second largest airline operating between the US and Puerto Rico, measured by seat share. JetBlue’s share was 27%, followed by Spirit at 17%. American was the third largest operator in the market, with a share of 15%.

Spirit does add two destinations in Colombia, even as new city growth slows

As it eases the expansion of new cities, Spirit has decided to enlarge its footprint in Colombia with the launch of new services from Fort Lauderdale to Bucaramanga and Barranquilla in Apr-2020.

Colombia is Spirit’s second largest country served, measured by departing frequencies (see chart above). Spirit’s executives had concluded that Colombia was considered home to many in Florida, and was a growing leisure destination. As of early Feb-2020, Spirit held a 15% seat share between the US and Colombia, which was third behind Avianca’s 41% share and American’s 20% share.

Spirit makes a rational decision in its latest network pivot

After a fairly significant push into new cities during the past couple of years, Spirit’s decision to take a break from new market growth and focus on building on points of strength is a logical move as its overall network continues to mature.

The airline still believes it has a lot of opportunities for network development in the pipeline; but for now, Spirit believes it is time to pause and let some new markets reach a certain level of maturity.