US LCC Spirit Airlines has reportedly delayed its planned IPO. The airline announced its proposed listing in Sep-2010, planning to sell 20 million shares at USD14-16 each to raise as much as USD320 million.

Fund raised were to have be used to repay debt and pay Indigo Partners, the private equity firm which bought a majority stake in Spirit in 2006. Indigo Partners is heavily involved in LCC investment globally, with stakes in Wizz Air, Volaris, Tiger Airways and Avianova.

Neither Indigo Partners or Oaktree Capital Management, also a major investor in aviation businesses, were expected to reduce their shareholdings in the IPO.

In Europe, LCC shares improved, particularly in the UK and Ireland, as fears over the severity of the Grimsvotn volcanic eruption eased. The eruption has resulted in the cancellation of more than 500 flights and expected to affect flights in continental Europe through the remainder of the week, but a repeat of the week-long crisis in 2010, when 100,000 flights were cancelled, is not expected. UK and Irish carriers had been some of the first to suffer cancellations due to the risk of ash contamination. 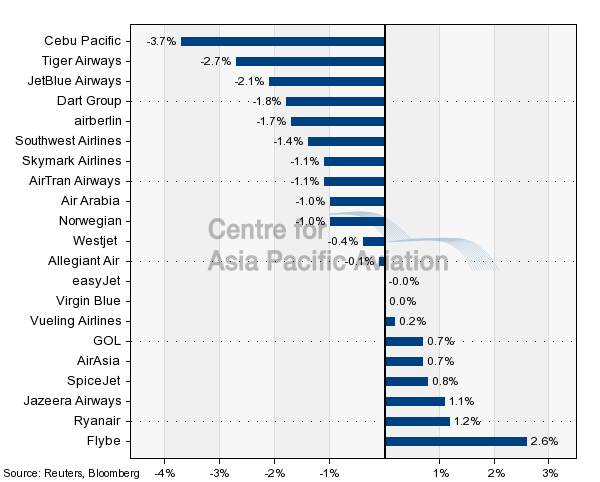