Southwest Airlines' shares were up marginally (0.4%) yesterday, as CEO and Chairman, Gary Kelly, in an interview with the Wall Street Journal, stated he would “endorse the view that things are not getting worse in the economy". He added, "certainly that's what we're seeing at Southwest…things seem to have bottomed”.

However, Mr Kelly stated that post-Labor Day demand would "depend more on business travel", adding, "I do not believe you're going to see a surge in business travel any time soon". Mr Kelly noted, "without that, the airline industry will continue to suffer”. Accordingly, Mr Kelly stated the outlook for industry revenues is "still pessimistic in the near term”, although “there's a chance [Southwest] can grow revenues in 2010, if we assume things don't get worse in the economy."

Discussing the possibility of further Southwest acquisition bids, following the carrier’s setback from the Frontier failure, Mr Kelly stated, “even Tiger Woods doesn't win every tournament. We'll be back in the game for the next tournament. It's a matter of being opportunistic. Any time you've got a competitor failing in bankruptcy, that presents an opportunity”.

Also in the US, Allegiant's shares jumped 5.2% on Thursday, with JetBlue 3.7% stronger. JetBlue has suspended sales of its unlimited flight pass on Wednesday, as sales “exceeded all expectations” in the six days it was offered. The pass has also been a publicity-booster for the New York based-carrier. 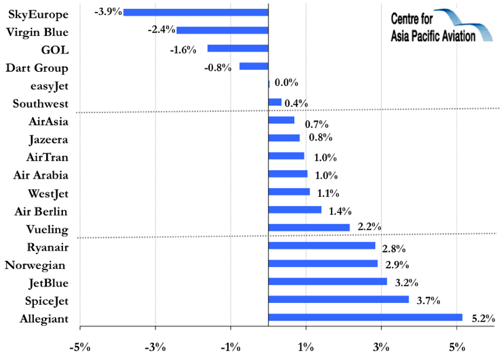