South Korea’s inbound tourism market is going through the roof as new entrants and deregulation open up skies that have previously been closely held.

The impact on the economy, on the country’s international airports and for consumer benefits are proving remarkable, as the Government continues to liberalise access to Korea’s international markets.

The North Asian triangle, of South Korea, Japan and China, which had been an LCC-free zone for so long, is starting to crack open, with three new LCCs arriving in Japan alone this year.

The 28% growth in Apr-2012 is no aberration either. Increases have exceeded 20% in four of the past five months.

The impact on traffic growth is stark – and immediate

Inbound tourism to Korea is already showing the effects of new low cost entry, with overall growth of an astonishing 28% year-on-year for the month of Apr-2012; the largest market growth was from China, up by a whopping 44% year-on-year; but Japan (+36%) and Taiwan (+35%) also continued their boom run. While Japanese figures are offset from low levels in 2011 due to the Mar-2011 earthquake and tsunami in Japan, the overall growth is still positive.

This is hardly a coincidence. The impact of new entry and aggressive pricing has transformed a previously stagnant travel market. South Korea has admitted LCCs for some time now and the results are starting to show boldly. 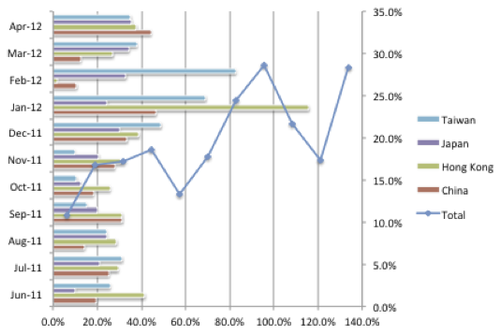 It is a combination of the direct (new seats, new routes, low prices) and indirect (responses from incumbents) effects of these low-cost operations that has helped stimulate these remarkable levels of economic activity – at a time when the world’s economy is slackening and even China is slowing.

From a very modest base five years ago, LCCs now account for 7% of total seats into and out of South Korea. But the important feature of the graph below is the rate at which this proportion is expanding. And, in the marketplace, the flow-on effect they are having magnifies this further. 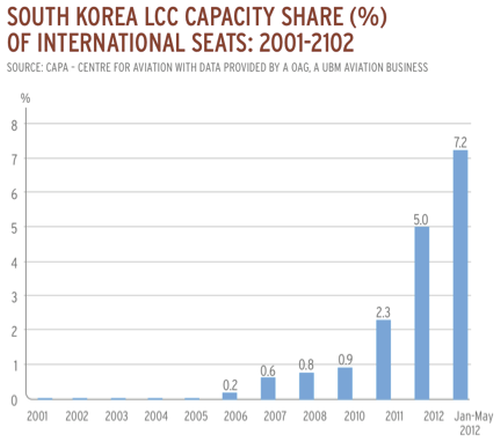 Domestically in South Korea, where LCCs have been operating for longer and where independent airlines have been more prominent, the proportion of LCC seats is much higher, at almost 30%. South Korea’s LCCs were initially restricted to domestic operations, explaining the late international growth. 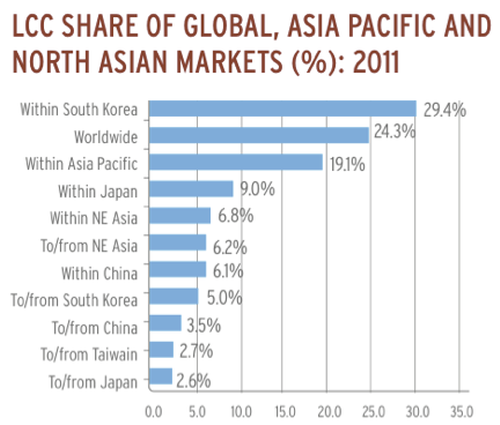 South Korea’s geography – a small peninsular area effectively linked by high-speed rail – has limited prospects for domestic flights; domestic seats account for only 32% of the total in Korea. Where LCCs have found a footing is services to Jeju, an island not linked by rail and thus dependent on air. Being a leisure destination, it was a prime market for independent LCCs like Eastar Jet as well as an easy route for Asiana and Korean Air to hand over routes to their respective LCC subsidiaries, Air Busan and Jin Air. With the exception of Air Busan’s services between Seoul and Busan, all domestic LCC routes are to or from Jeju, a remarkably different scenario than will unfold in Japan.

Japan is also distinguished by having its new LCC entrants fit the more conventional mould of a la carte pricing whereas Korea’s LCCs still offer perks, as do Japan’s established discount carriers like Skymark. They argue this “Korean-style” LCC is all the market will tolerate, but as foreign stripped-down LCCs carve a larger presence in Korea, and come into greater competition with the Korean LCCs, the tide will have to change. It is then Korea’s LCCs can be sized up. For now, they have their niches – Air Busan and Jin Air were handed theirs by their full service parent – and face little competition, allowing inefficiencies to creep in or be blatantly prominent; Air Busan operates a fleet of both classic Boeing 737s as well as A320 family aircraft. The country that started the region’s LCC revolution is due for a major shakeup.

For a more complete summary of North Asian LCC developments, please see the May/June edition of Airline Leader. To obtain your copy, click on the banner to the right of this story. 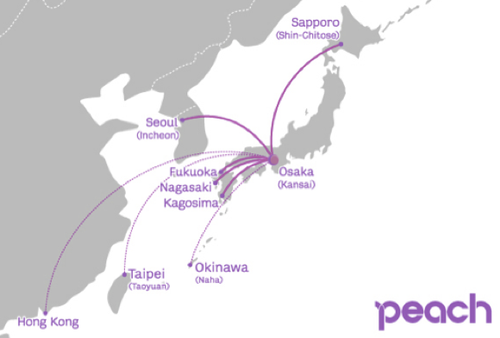 The next LCC to commence operating, Jetstar Japan, a part subsidiary of Japan Airlines (JAL) and JV with Qantas Group’s Jetstar, begins service in Jul-2012. Jetstar Japan launched its sales programme with 10,000 one-way fares on six domestic routes. The JAL-Jetstar JV will operate from its base at Tokyo Narita, and a hub at Osaka Kansai, with an initial fleet of three A320s. (Jetstar recently also announced the establishment of a JV LCC with China Eastern, to be based in Hong Kong.)

Then, in Aug-2012, a second ANA part-subsidiary, this one a JV with the region’s largest independent LCC AirAsia, will take to the skies. AirAsia CEO Tony Fernandes has already talked of higher growth of AirAsia Japan in view of the “exciting” prospects of the market.

The airlines are small at this stage – but they are already shaking the ageing foundations of Japan’s legacy aviation structure.

Mainland China is dragging its heels in the LCC movement

Mainland China meanwhile has not yet joined the movement, effectively preventing the establishment of domestic LCCs, although nodding at international operations. Thus its main home-based LCC, Shanghai-based Spring Airlines, is focussing its growth efforts on international routes (and has also announced plans to form a JV with Japanese interests to establish a new airline in that country).

And Taiwan’s majors are thinking subsidiaries

Both EVA and China Airlines, Taiwan’s two network airlines, are now considering establishing their own LCC subsidiaries, a priority that will grow rapidly as the foreign LCCs intrude rapidly into their international market; Southeast Asian-based LCCs have typically viewed Taipei as too far while pressure from the north was slim.